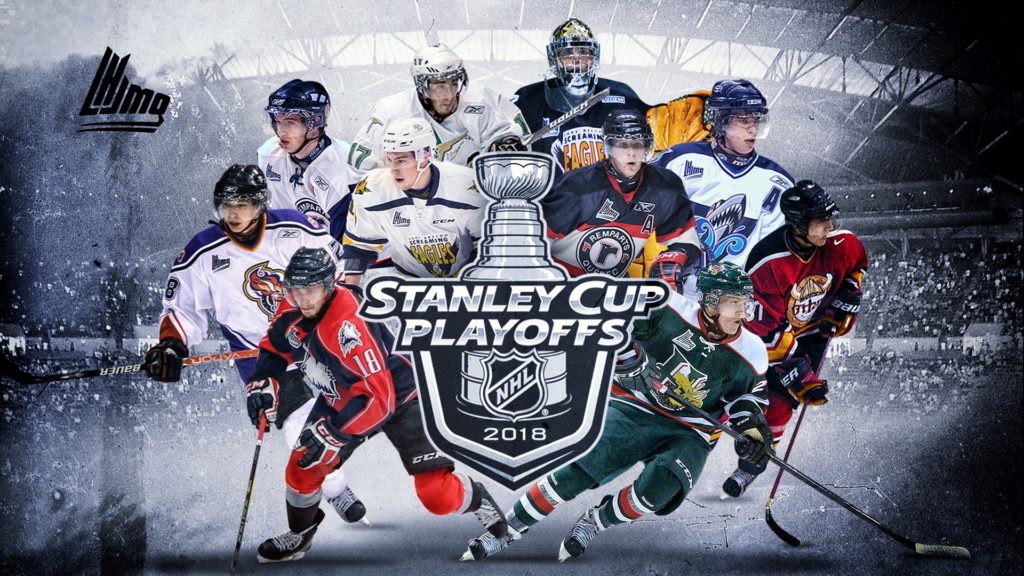 With the QMJHL playoffs already in full swing, the NHL kicked theirs off on Wednesday, April 11th. Many QMJHL alumni have now turned into professional superstars and make up the rosters of this year’s top 16 NHL teams that are vying for the Stanley Cup. Here, we present you with some players to watch from the Q’s past that are sure to entertain every hockey fan during the opening round of the NHL Playoffs.

Although they never met back in their QMJHL days, alumni Charlie Coyle and Nikolaj Ehlers will be facing off in this matchup. Coyle was a big part of the Saint John Sea Dogs in the 2011-2012 season, a year in which the New Brunswick franchise won the President Cup, whereas Ehlers played in Nova Scotia for the Halifax Mooseheads from 2013 to 2015. After spending the opening half of the season playing for Boston University, Coyle made the switch to the QMJHL and had an immeadiate impact with the Sea Dogs – he managed to collect 38 points over the 23  season games he appeared in, before adding another 34 points in 17 playoff games and collecting the playoff MVP award. Since he began playing in the NHL, Coyle hasn’t shied away from the postseason, having made it past the 82-game mark in all six of his seasons with the Wild. As for Ehlers, the Danish-born player will be partaking in his very first playoff run after hitting the 60-point mark for a second consecutive season. The “Dashing Dane” will be heavily relied upon to put the puck in the net after scoring 29 regular season goals, third most on the Jets roster.

The Avalanche fought their way into the playoff picture after an abysmal season last year, and with them, they have brought Hart-Trophy hopeful Nathan MacKinnon, as well as current starter Jonathan Bernier. MacKinnon has had productive seasons ever since he was a teenager in the QMJHL. Playing for the Halifax Mooseheads in 2013, he helped his team to a President Cup before getting his hands on the coveted Memorial Cup. This year, MacKinnon broke out and fell one tally short of the 40-goal plateau, all while managing to finish the season with 97 points in just 74 games played, his most productive NHL season to date. As for Bernier, the Laval-native goaltender played four seasons with the Lewiston MAINEiacs during which he won the President Cup once, in 2006-07. Following an injury to Semyon Varlmaov in the regular season, Bernier was thrust into the starting role for the Avalanche and did not disappoint. His nine-game win streak to kick off the new year certainly helped Colorado pick up some valuable points it needed down the stretch. Bernier has been in the playoffs before with the Anaheim Ducks and the Los Angeles Kings, and though he didn’t officially start any games for them, he was part of the Stanley Cup winning Kings team back in the 2011-12 playoffs.

The Golden Knights have had a record-breaking first season and they could not have done it without the help of some former QMJHL talent: goaltender Marc-André Fleury and the team’s second top scorer, Jonathan Marchessault. Fleury played his entire Q career with the Cape Breton Screaming Eagles, before being drafted first overall by the Pittsburgh Penguins. He found great success with them, having numerous playoff runs and seeing three of them finishing with the Stanley Cup above his head. Fleury finished his first season in Vegas with a 0.927% save percentage as well as a 2.24 goals-against-average, his best average to date in his NHL career and tied for second best in the NHL this season. As for Marchessault, he spent his four seasons in the Q with the Québec Remparts, leading the league in playoffs points back in 2010-11 when he picked up 33 (11G, 22A) in 18 games. After going undrafted, he spent some time in the AHL before playing the Columbus Blue Jackets, the Tampa Bay Lightning and eventually the Florida Panthers. This past summer, he was picked up by the Golden Knights in the expansion draft and proceeded to break out and collect 75 points in 77 games. It will be interesting to see if he can bring some of his Remparts playoff spark back to help the Golden Knights in their first ever postseason run.

The Sharks are going into the off-season housing former QMJHL players such as one of the NHL’s top shutdown defenseman in Marc-Édouard Vlasic, and promising prospect Timo Meier. Vlasic used to play for the Québec Remparts, with whom he won a Memorial Cup back in 2005-06, before being signed by the Sharks and never looking back. Vlasic enters the playoffs after having scored a career-best 11 goals in the regular season. With more than 110 NHL playoff games to his name, the 31-year-old blueliner is looking to make this year’s Cup run count. As for Meier, he played three years with the Halifax Mooseheads before being traded to the Rouyn-Noranda Huskies during his final season in the Q, a team with which he won the President Cup back in 2016. Meier has just wrapped up his first full season in the NHL since being drafted by the Sharks two years ago. The Swiss-born player showed off his skillset and did not disappoint team management; he finished with 36 points in 81 games and scored the fourth-most goals on the team with 21.

The Bruins enter yet another postseason and bring with them some of the biggest names in hockey today. Former QMJHL superstar forwards Patrice Bergeron and Brad Marchand will be present for the postseason stint versus Toronto. Both players hoisted the cup back in 2011 when the Bruins were crowned champions, so they aren’t unfamiliar with success in the postseason. Bergeron, who played for the Acadie-Bathurst Titan before being drafted by the Bruins, is coming off yet another successful season after garnering 63 points in 64 games. He’s been a favorite for the past number of years for the Frank J. Selke Trophy and he could very well win it again this year, although his injuries may have hurt his chances. As for Marchand, he played for the Moncton Wildcats – with whom he won the President Cup in 2006 – as well as for the Val-d’Or Foreurs and Halifax Mooseheads. Since the Bruins picked him up, he’s been increasing his production and goal-scoring for his team. This year, he tied his career-high of 85 points in a season and impressed by doing so in just 68 games instead of the usual 82.

Some of the QMJHL’s most talked-about alumni from this season will be going head-to-head in this series. First off, the Lightning is home to Yanni Gourde, who broke the franchise record for most points by a rookie in one season, bringing the bar up to 64, as well as goals by a rookie with 25. If that wasn’t enough, forward Nikita Kucherov who also played in the Q, briefly being a part of the Québec Remparts before making his way to the Rouyn-Noranda Huskies, has put together a Hart Trophy worthy campaign. With 42 points in 45 career playoff games to his name, Kucherov heads into this postseason after having finished with his best NHL season to date – an impressive 100-point collection, consisting of 39 goals and 61 assists. Now playing for the Devils, Nico Hischier played last season with the Halifax Mooseheads before being drafted first overall in the latest NHL Draft. He impressed the Devils’ management enough to earn a full-time roster spot in his first go and has had a productive first season with 20 goals and 32 assists, good for 52 points. With such numbers, it isn’t surprising that his name is brought up in conversations for the Calder Trophy, though he does have some stiff competition in that department. As this was his first season in the big leagues, this will also be Hischier’s first playoff run.

The Blue Jackets are home to some talented former QMJHL players such as Pierre-Luc Dubois and David Savard. Dubois used to play for the Cape Breton Screaming Eagles before being dealt to the Blainville-Boisbriand Armada and helping the latter all the way to the President Cup final. Drafted third overall by the Blue Jackets in 2016, he recently wrapped up an amazing rookie season with 48 points, more than any other rookie had garnered in franchise history. With a great team backing him up, Dubois looks to make a good impression in his first playoff run. As for Savard, he played one season for the Baie-Comeau Drakkar before spending the next three with the Moncton Wildcats, with whom he ultimately won the President Cup in 2010. The top-scoring blueliner in the QMJHL (77 points in 64 games) in 2009-10 is now known for his reliable defensive game and brings great leadership to the Blue Jackets young defenseman corps.

This one will be a matchup to watch out for, as some of the top former QMJHL players will be going head-to-head. First of all, Sidney Crosby was one of the most productive players in the Q and is now one of hockey’s living legends in the NHL. He played for the Rimouski Océanic for two seasons and helped them win a President Cup in 2005. He was then drafted first overall by the Penguins and has since been an influential franchise player. He’s won the Stanley Cup three times and has had numerous 100-point seasons. This year, he finished with 29 goals and 60 assists, good for 89 points. As we’ve gotten accustomed to seeing over the years, Crosby will be a constant threat, capable of impacting the playoffs every time he sets foot on the ice. Superstar blueliner Kristopher Letang is another Penguins player to watch and one who played three seasons in the Q with the Val-d’Or Foreurs. For the Flyers, captain Claude Giroux used to play for the Gatineau Olympiques before being drafted by Philadelphia in 2006. In his time in the QMJHL, he managed to win a President Cup in 2008 following a historic playoff run in which he picked up 51 points in 19 games. Giroux has played many seasons with the Flyers and has seen his fair share of playoff hockey, but he has never entered the postseason with this level of offensive power. He recently ended his most productive season to date with 34 goals and 68 assists, good for 102 points. His name has been heard in regards to the Hart Trophy race as well. Giroux is not the only Q alumnus to keep an eye on with the Flyers in the postseason, as his linemate Sean Couturier also played a couple years with the Drummondville Voltigeurs, winning his own President Cup back in 2009. Since being paired with Giroux, Couturier has proved he’s capable of putting up his fair share of points as well, ending the regular season with 31 goals, 45 assists and 76 points – all career bests.