Mantha, Whitney and Brassard named the TELUS three stars of the week 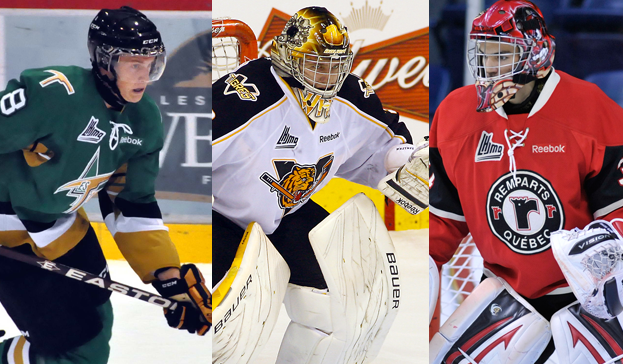 Anthony Mantha, Brandon Whitney and François Brassard were named today the TELUS three stars of the week for October 7 to 13, 2013.

With 10 points from 5 goals and 5 assists in 2 games, and a +/- of +7, the Val-d’Or Foreurs forward, Anthony Mantha, is the first star of the week in the QMJHL. He had 2 consecutive games of 5 points and was named the first star for both games. Friday in a 6-4 win against the Drummondville Voltigeurs, he scored 2 goals and added 3 helpers. Saturday, against the Sherbrooke Phoenix, he scored 3 more goals while adding 2 assists. Mantha had 11 his team’s 44 shots on goal, which ended with a 6-5 win in overtime. As the Foreurs extended the number of consecutive wins to 5 this weekend, their star forward climbed to first in League scoring, with 28 points, including 16 goals in 9 games so far in the 2013-14 season.

Brandon Whitney, the Victoriaville Tigres goaltender, concluded the week with second star honours. On top of a shutout, he had a goals against average of 0.50 and a save percentage of .981. In 2 road games, he allowed only one goal on Thursday against the Gatineau Olympiques for a 2-1 win. On October 11, against the Shawinigan Cataractes, he made 31 saves in his first shutout of the 2013-14 season in a 3-0 win. He was named the first star in both games.

With a total of 3 wins, a goals against average of 1.33 and a save percentage of .946, Francois Brassard, the Quebec Remparts goaltender, is the third star this week. Wednesday in Baie-Comeau, he made 28 saves while on Friday against the Acadie-Bathurst Titan he got his first shutout of the season with 21 saves. Sunday, against the Moncton Wildcats, he stopped the puck 21 times for his third win of the week.