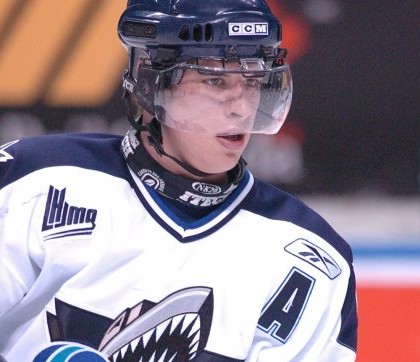 After a few game nights of anticipation, former Rimouski Oceanic star Sidney Crosby reached the 1,000 NHL point plateau in a 4-3 overtime win over the Jets on February 16. Crosby hit the milestone by assisting on Pittsburgh’s second goal along with fellow QMJHL alum Kristopher Letang (Val-d’Or). In classic Crosby fashion he wasn’t done his night’s work, adding another assist and the OT winner to further toast a festive evening on home ice at PPG Paints Arena in Pittsburgh.

Meanwhile as far as other current QMJHL alumni in the NHL who are inching towards the 1,000-point mark, there are four players in that conversation. Despite running out of the race track in his NHL career, Mike Ribeiro (Rouyn-Noranda/Quebec 1997-2000) is the closest to the milestone at 793 points. Sitting behind Ribeiro at 651 points apiece as of today are Jason Pominville (Shawinigan 1998-2002) and Patrice Bergeron (Acadie-Bathurst 2001-03).

Next up is Claude Giroux (Gatineau 2005-08) with 558 points in 631 games so far in this All-Star career. He would have to maintain his 0.88 points per game average in order to reach the 1,000-point mark as a 36-year-old. His Flyers teammate Jakub Voracek (Halifax 2006-08) would have to keep his current pace to get there by age 37, while Olympiques’ alum David Krejci would have to stay at his current clip, stay healthy and play until age 40.

While they may be a long way from planning for their 1,000th NHL point, here is how the QMJHL’s recent graduates are trending early in their careers. At only 21 years old, Nathan McKinnon (Halifax 2011-13) has 191 points in 273 games (0.70 points per game). Given he averaged 0.77 points per game as a rookie, McKinnon stands as the player with the best potential of joining Crosby in the QMJHL’s 1,000 NHL point club, especially should the Avalanche turn things around offensively or should he end up with a dominant team down the road.

And should we decide to stretch things even further, two other youngsters are making waves early in their NHL journeys. Now in his sophomore NHL season, the Jets’ Nikolaj Ehlers (Halifax 2013-15) has an impressive 0.64 points per game average while rookie Anthony Mantha (Val-d’Or 2010-2014) is at 0.62 over his first 52 NHL games.

Should he get there, Crosby would become only the third QMJHL product to do so. He would join Mario Lemieux (1,033) and Ray Bourque (1,169).