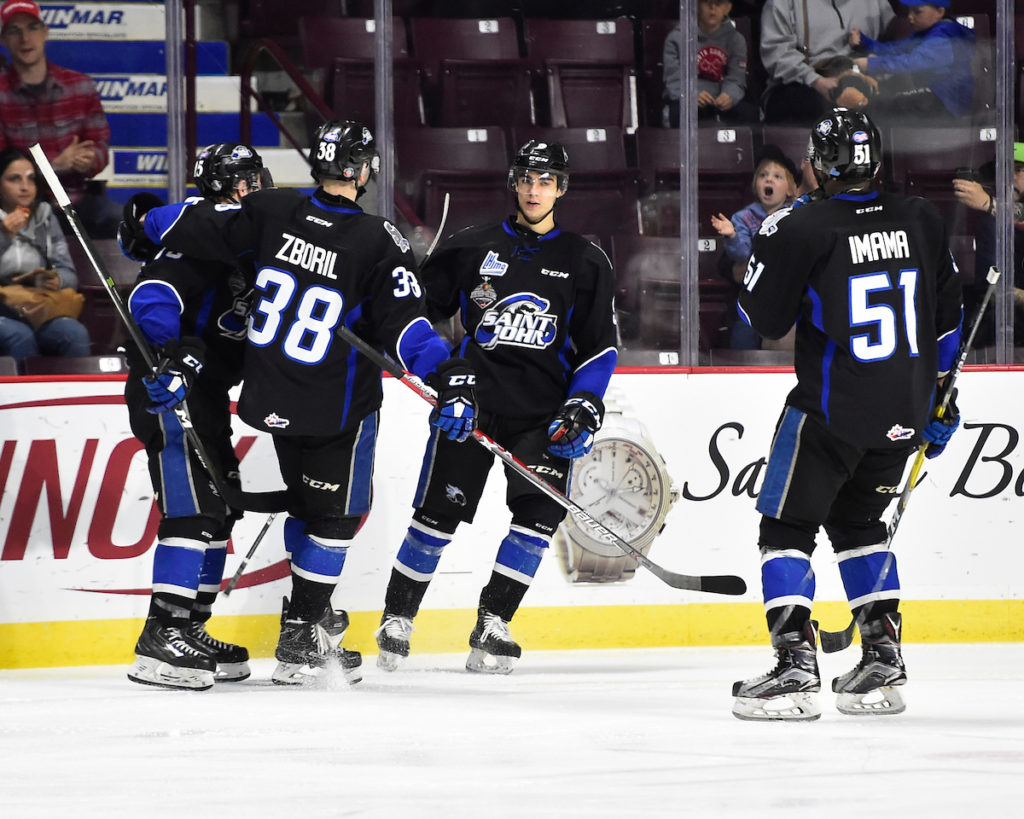 WINDSOR, ON, Tuesday May 23, 2017 – Gunning for revenge after losing their first two games of the tournament, the QMJHL champion Saint John Sea Dogs proved they were still very much alive with a resounding 7-0 victory over the WHL champion Seattle Thunderbirds at the WFCU Centre in Windsor, Ontario.

At the Memorial Cup, it really isn’t over until over and it is always wise to expect the unexpected. Following their disappointing opening two games of the 2017 Mastercard Memorial Cup that saw the Sea Dogs dig themselves into a 0-2 hole, including a poor showing in 12-5 loss to the Erie Otters on Monday night, Saint John sprang to life against the Thunderbirds. With a berth in the semi-final on the line for the two winless clubs, the Sea Dogs seized the opportunity in a big way as they reminded everyone why they were the toast of the QMJHL this season.

An aggressive Sea Dogs’ forecheck led to Saint John scoring the all-important opening goal of the game for the first time in this tournament. At the 1:14 mark of the second period, Joe Veleno scooped up a Thunderbirds’ clearing attempt inside the blue line before beating Seattle netminder Carl Stankowski.

The Sea Dogs’ doubled their lead when Chase Stewart buried a pass from Jakub Zboril past Stankowski to make it 2-0. Then only 15 seconds later, Matthew Highmore set up Mathieu Joseph who streaked in to beat Stankowksi up high to make it 3-0 for the suddenly surging Sea Dogs. Spencer Smallman then got in on the fun when he shovelled feed from Julien Gauthier past a beleaguered Stankowski who was yanked at that point after allowing three goals in 53 seconds.
At that point, the rout was on as the Sea Dogs would continue taking their frustrations of their first two games of the tournament out on the Thunderbirds. Two more goals would follow to close out an explosive second period for the Sea Dogs.

Goal No. 5 for the Sea Dogs came courtesy of Cole Reginato who, from just outside the crease,  converted a perfect set up from Canadiens’ prospect Simon Bourque and Nathan Noel. Then only 44 seconds after the Reginato goal, it was Bokondji Imama’s turn to light the lamp when he picked off a pass attempt deep in the Seattle zone before beating Thunderbirds back-up goalie Rylan Toth to make it 6-0.

All told the Sea Dogs busy period saw them score five of their six goals in just over three minutes of play.

Not done pouring in the goals quite yet, Veleno struck again at the 6:21 mark of the third period when he accepted a nifty pass from Highmore to make it 7-0.  When it was all said and done, Veleno led the way with two goals and an assist for the Sea Dogs, while also posting an impressive +5 rating on the night. The talented 17-year-old sniper is, of course, still one year away from being eligible for the NHL Draft next summer.

With strong showing of his own, Imama had a goal and two assists for the Sea Dogs, while captain Spencer Smallman (1-1-2) and Highmore (0-2-2) both had multi-point nights.

A total of 11 Sea Dogs picked up at least one point in their big win.

After a difficult night that saw him pulled from the action in the opening period against Erie only 24 hours earlier, Callum Booth returned to form in a major way for the Sea Dogs. A fourth-round pick of the Carolina Hurricanes at the 2015 NHL Draft, Booth kicked aside all 31 shots he faced as he returned to the form he brilliantly displayed during the Sea Dogs’ 16-2 run en route to winning the President’s Cup as QMJHL Champions.

Booth’s shutout was the first by a QMJHL goalie since the 2015 Mastercard Memorial Cup when Philippe Desrosiers made 27 saves for the Rimouski Oceanic against the Quebec Remparts.

On the Thunderbirds’ side, starter Stankowski allowed three goals on 14 shots while Toth stopped 11 of the 14 shots he faced in relief. Seattle now returns home thanks to a 0-3 record in Windsor.

Saint John now has their semifinal booked for Friday night against the loser of the Windsor-Erie matchup on Wednesday night. The Sea Dogs will be looking to emulate the feat accomplished by the Spitfires at the 2009 Mastercard Memorial Cup in Rimouski, Quebec when they began the tourney 0-2 with losses to QMJHL’s Drummondville and hosts Rimouski only to roar back to win the tournament.

The pivotal battle between the Spitfires and Otters will get underway at 7:00 p.m. on Wednesday night, while the semi-final versus the Sea Dogs is scheduled for 7:00 p.m. on Friday night with all the action being available on Sportsnet, TVA Sports, NHL Network and CHL Live.