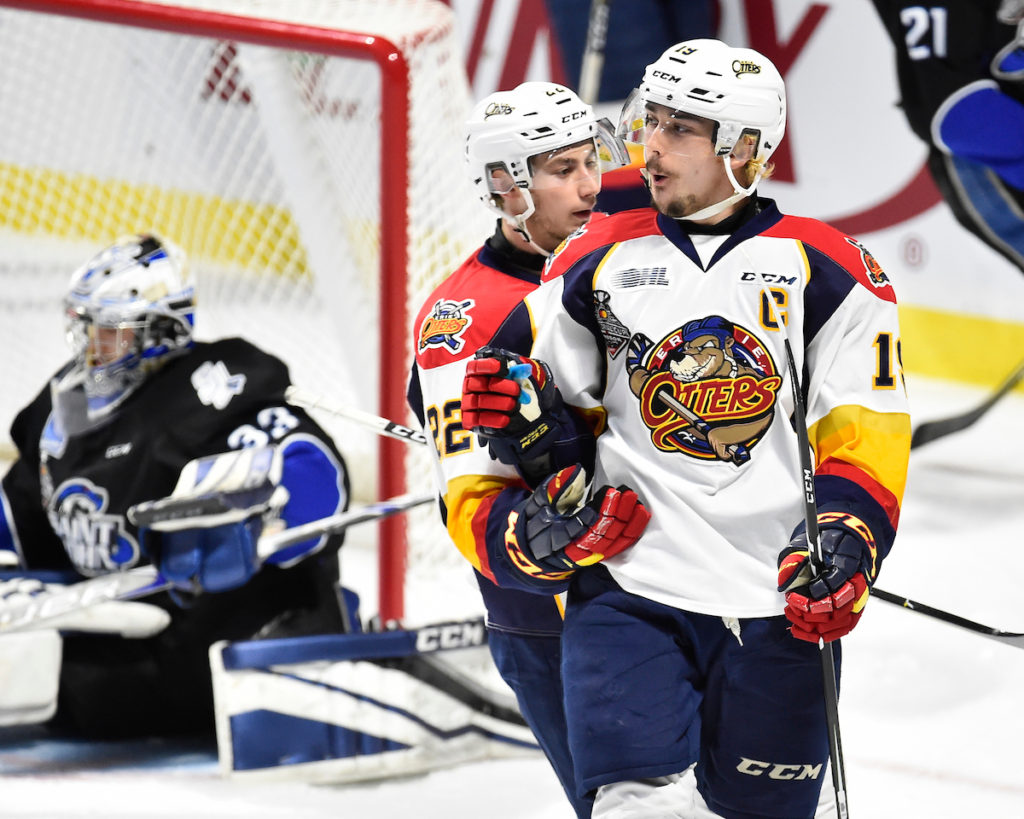 WINDSOR, ON – Looking for redemption after losing their opening game of the tournament, the Saint John Sea Dogs ended up on the wrong end of a record night at the 2017 Mastercard Memorial Cup Monday, as the QMJHL champions were outgunned 12-5 by the OHL champion Erie Otters at the WFCU Centre in Windsor, Ontario.

It didn’t take long for Saint John to get the feeling they were going to be in for a long night as Erie opened the scoring on their first shot of the game, 1:06 into the contest. The Sea Dogs may have tied the game at 1-1 just past the five-minute mark of the first period on Cedric Paré’s first goal of the tournament, but that would be as close as Saint John would come on this night. Matt Green and Thomas Chabot picked up the assists on that goal.

The Otters kept pouring it on, going up 4-1 midway through the first period with three goals in less than four minutes by Darren Raddysh, Kyle Maksimovich and Dylan Strome.

Tampa Bay Lightning prospect Mathieu Joseph cut the lead to two goals at 13:32 with his first of the tournament on Thomas Chabot’s second assist of the game.
The Otters’ Anthony Cirelli then chased starter Callum Booth from the Sea Dogs’ net, putting the Otters back up by three as they ended the period with a 17-4 shot advantage and a 5-2 lead.

The hole only deepened for Saint John in the second period. Back-up goalie Alex D’Orio was just as busy between the pipes; facing 16 shots in a frame that saw the Otters build their lead to 9-3.

Taylor and Darren Raddysh each added their second goal of the night and so did Dylan Strome, with Chicago Blackhawks prospect Alex DeBrincat getting in on the action with his first of the tournament.

Down 7-2 halfway through the game, Mathieu Joseph was denied on a penalty shot by Otters’ goalie Troy Timpano. Saint John captain Spencer Smallman found the back of the net for his team’s third goal with just over two minutes to go in the period on a set up from Joseph.

Erie sealed the deal with three more goals in the third, including Dylan Strome’s third and fourth tallies of the game. Cedric Pare scored unassisted and Julien Gauthier added his first of the tournament with less than five minutes to go to complete the scoring.

In the end, it was a resounding 12-5 win for the Otters in what became a record-smashing night for the OHL champions.

The 12 goals scored by Erie set a tournament record, surpassing a mark set in 1980 by the Regina Pats in an 11-2 rout of the Cornwall Royals. This could be a possible motivator for Saint John since the Royals ended up winning the Memorial Cup final three days later.

Other records were shattered in Windsor on Monday night.

Drafted third overall by the Arizona Coyotes at the 2015 NHL Draft, Dylan Strome wrote his name into the MasterCard Memorial Cup record book with an unbelievable seven-point performance with four goals and three assists.

Just one point shy of tying his teammate for that record was Tampa Bay Lightning prospect Taylor Raddysh who ended his night’s work with a pair of goals and four assists.

No fewer than 11 players picked up at least one point for the Otters, with other notable performances coming from Darren Raddysh (2-2-4), Anthony Cirelli (1-3-4) and Alex DeBrincat (1-3-4).

Erie outshot Saint John 39-23 and their power play was dominant, going 5-for-7. Netminder Troy Timpano stopped 18 of the 23 shots he faced for the win, his second of the tournament.

The Sea Dogs won’t have much time to lick their wounds and if the QMJHL champs are going to end up raising the 2017 Mastercard Memorial Cup, they are going to have to do it the hard way. Winless after two games, Saint John will be facing a must-win game against the Seattle Thunderbirds (0-2) on Tuesday night.
A victory there would send either the Sea Dogs or Thunderbirds to the semifinal. In other words, this remains anyone’s tournament and anything can happen at the Mastercard Memorial Cup.