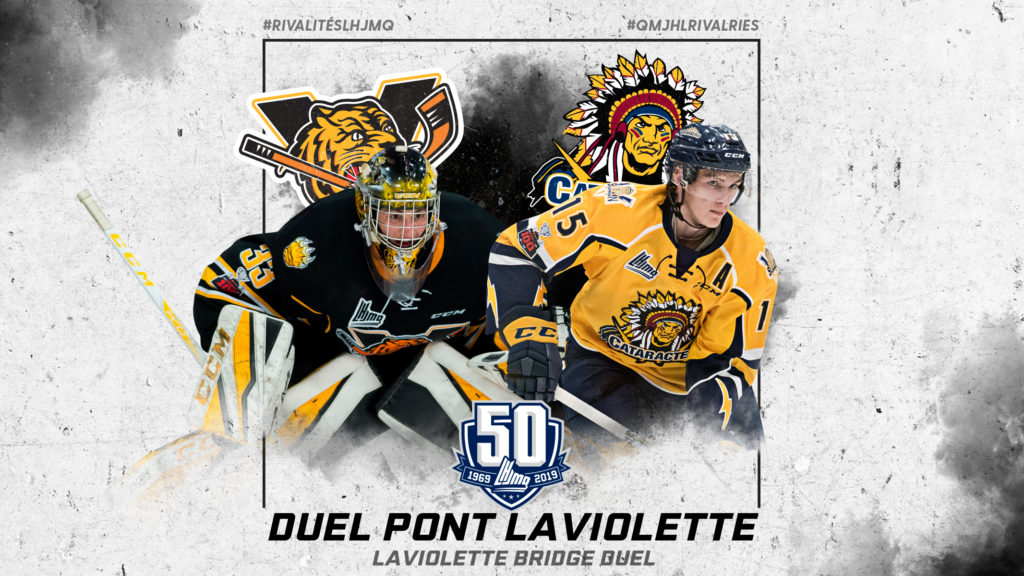 When talking about QMJHL Rivalry Weekend, intensity and passion are always on the menu. So, what could be better than the league’s oldest rivalry to help stir things up?

Cue the Victoriaville Tigres and Shawinigan Cataractes who will get the hostilities underway this weekend. Historically speaking, these two clubs have locked horns 233 times with the Cataractes holding a 114-104 advantage over the Tigres, and both teams tying another 15 games.

Despite that tight record in head-to-head showdowns, the Cataractes have been far more explosive in the goal department to the tune of 972 goals while the Tigres have countered with 788 of their own.

The respective paths of these two teams are rich in both history and talent. Many fans will recall the exploits of the Cataractes’ Patrice Lefebvre who still stands as the QMJHL’s all-time points leader with 595 in 276 career games. Who can then forget Shawinigan’s Marc-Andre Bergeron who set the league mark for most goals in a season by a defenceman with 42 markers in 2000-01.

As for Tigres’ fans, there was the unforgettable Guy Rouleau who was an offensive juggernaut that scored 76 goals in 60 games back in 1983-84.

The track record of both teams is impressive enough in the stats department, but the rivalry also boasts a remarkable level of intensity felt on the ice year after year.

Separated geographically by only 83 km, these two teams will go toe-to-toe once again this weekend. Looking back at even just the past four seasons or specifically the last four Rivalry Weekends, the teams have come away with a split of those contests.

Last season, Shawinigan won both meetings (6-3 and 4-2). The club’s split the games in 2016-17 and 2015-16 and in 2014-15 the Tigres won both (4-2 and 4-3). The rivalry has been firing on all cylinders in recent years. Last season, even though the Cataractes ended up finishing 17th overall, they still managed to win both games over the Tigres who finished sixth.

As far as the postseason is concerned, the last time these two collided in the spring dates back to the spring of 2010 when Victoriaville ousted Shawinigan in six games in the opening round of the playoffs.

Getting traded can be either frustrating or exciting for a player, but nothing compares to being dealt to a rival. That was the case in 2015-16, when Shawinigan sent James Phelan and a third-round pick in 2016 to Victoriaville in exchange for right winger Gabriel Gagne. The Tigres’ acquisition then made his presence felt against his former mates over the next two Rivalry Weekends.

In 2014-15, Phelan picked up two assists with the Cataractes against the Tigres. Then once with Victoriaville, he struck with two goals and three assists in the four games against his former team in 2016-17 and 2017-18.

Other players have also made their mark on this storied rivalry. Forwards like Samuel Blier, Samuel Asselin and Alexis D’Aoust were also difference-makers for the Cats while Samuel Blais and Maxime Comtois did the same for the Tigres.

The Victoriaville Tigres and Shawinigan Cataractes always seem to deliver good battles on Rivalry Weekend and this year surely will be no exception. Don’t miss any of the action when they clash on October 26 and 28!