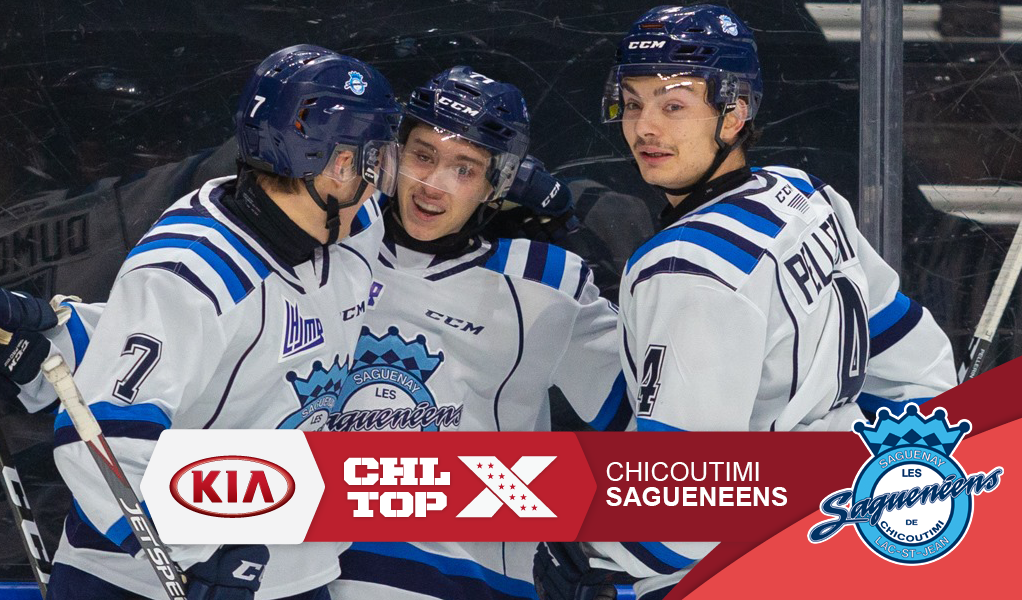 There is no shortage of excitement this season in Chicoutimi.

Headlined by a pair of first-round NHL draft choices, the Sagueneens are off to an exceptional start that has seen the squad collect points in nine of 11 contests, good for a 5-2-3-1 showing and top spot in the QMJHL’s East Division.

Indeed, the club has carried over its strong play from a year ago that saw it sit third place league-wide with 96 points before play paused. While the shuttered season ultimately upended the possibility of Chicoutimi claiming a franchise-first Memorial Cup championship, the squad has quickly rediscovered its formidable play from last season and shown why it earned recognition in the preseason edition of the Kia CHL Top-10 Rankings.

Weekly editions to resume when each of @TheWHL, @OHLHockey and @QMJHL are in action. pic.twitter.com/QK07wgYCWH

Most exciting is that much of last year’s potent roster has returned for 2020-21, including future NHLers like Dawson Mercer and Hendrix Lapierre, both of whom heard their name called in the first round of the 2020 NHL Draft by the New Jersey Devils and Washington Capitals, respectively.

The two talents are currently attending Canada’s national team selection camp as they aim for a spot at the 2021 World Juniors, with Mercer among a group of potential returnees who helped the Great White North to its 18th gold medal a year ago who now have the rare opportunity to repeat that feat this winter.

“I want to bring some leadership within the group,” Mercer told Robin Short of The Telegram. “We had a real good core group last year and I think that is a big reason why we won the gold medal … I am coming in here with (the mindset) to win the gold medal. Getting that gold medal around our necks and singing ‘O Canada’ is a feeling I am never going to forget. I am going to do whatever I can to make sure it happens again.”

Joining Chicoutimi from Drummondville following last year’s competition, the product of Bay Roberts, N.L., had a successful albeit brief showing with the Sagueneens in which he impressed with 18 points through 16 appearances. Among the team’s most dangerous offensive options, Mercer is also joined up front by one of the most intriguing talents in the circuit in Lapierre.

The first-overall selection from the 2018 QMJHL Entry Draft, Lapierre flashed early success with a 45-point freshman campaign in 2018-19 to earn the Michel Bergeron Trophy as the QMJHL’s Offensive Rookie of the Year. The ensuing season then saw the budding playmaker battle a string of untimely ailments, limiting his season to 19 appearances, though he did impress when available in producing just under a point-per-game pace with two goals and 15 assists.

Now back in action, it has been all positive since Lapierre returned to the ice as the Gatineau native has collected eight points through five contests, showcasing the skill set that made him an intriguing investment for the Capitals.

“I never really doubted what I could do, but I just didn’t have the chance to prove it on the ice,” Lapierre told Kevin Dubé of the Quebec Journal. “I never doubted that I was the player that I am. I had a good start to the season and I have worked hard in the last few months to get back into it. It’s a great reward and I am happy to have my place.”

With the Sagueneens, Mercer and Lapierre are seen as offensive leaders, particularly following offseason graduations that included former captain Rafael Harvey-Pinard who concluded his junior career with 248 total games played in addition to pro-bound prospects like Felix Bibeau of the New York Islanders and Raphael Lavoie of the Edmonton Oilers.

Still, the dynamic duo won’t be without scoring support as the Sagueneens own an exciting nucleus up front that includes newly minted captain Samuel Houde plus other valuable veterans like left-wing Christophe Farmer who has had a strong start to the new season with 11 points in as many games.

Chicoutimi’s invaluable experience continues on the back end where the Sagueneens house more NHL drafted talents like big-time blue-liner Louis Crevier, a 2020 seventh-round selection of the Chicago Blackhawks, as well as San Jose Sharks prospect Artemi Kniazev, who is currently competing on loan in his native Russia. Rounding out that group is veteran voice Karl Boudrias, a 2000-born rearguard who has found his offensive edge through the early goings of the new campaign with one goal and 10 assists through 11 contests.

Most importantly, however, the Sagueneens also boast experience between the pipes with veteran netminder Alexis Shank, who has been in the blue paint for each of the club’s five victories this season. That impressive stretch includes a 3-0 blanking of the rival Quebec Remparts in which Shank recorded his 10th career shutout to tie team alumnus Felix Potvin for the second-most perfect games in franchise history.

Altogether, strength in goal and plenty of offensive options up front coupled with strong support on the blue line makes the Sagueneens an exciting candidate to put together another season worth celebrating in 2020-21.