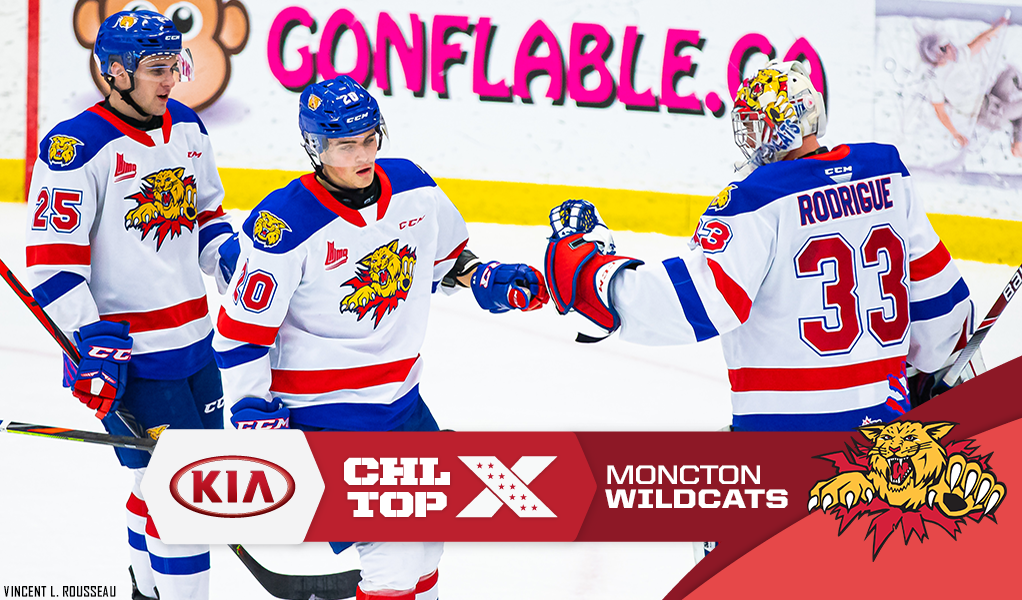 The Moncton Wildcats have clawed their way to number three in the latest Kia CHL Top-10 Rankings.

Riding a 21-game streak that has seen the club go unbeaten in regulation since January 11, the Wildcats sit atop the QMJHL’s Eastern Conference and clinched the Maritimes Division title with a 47-12-1-0 showing and 95 points. Moncton added to that total over the past week in coming away with victories over the Chicoutimi Sagueneens, Baie-Comeau Drakkar, and Rimouski Oceanic, whom the Wildcats outscored by a combined 15-4 margin while setting a franchise record with 15 straight wins.

The Wildcats boast a prolific offensive charge that features four players inside the league’s top-10 scorers that have helped contribute to the team’s total of 265 goals which ranks second in the QMJHL and fifth across the entire CHL. Minnesota Wild prospect Alexander Khovanov headlines the group with 95 points counting 32 goals and 63 assists through 47 appearances this season and trails only 2020 NHL Draft favourite Alexis Lafreniere of the Rimouski Oceanic for the league lead.

A third-round pick by the Wild in 2018, Khovanov has been a major force in Moncton’s climb up the standings as he has recorded at least one point in all but one of his past 28 appearances, a stretch that includes 18 multi-point appearances and dates back to mid-November. Such on-ice success helped Khovanov capture QMJHL Player of the Month honours for February following a dominant period in which he recorded 10 goals and 18 assists for 28 points in only 13 contests shattering his previous career high of 74 points in a season set a year ago with eight games still remaining on this season’s slate.

Beyond Khovanov, the Wildcats have their captain and Calgary Flames first round pick Jakob Pelletier and Anaheim Ducks prospect Benoit-Olivier Groulx who both carry 78 points including 29 goals and 49 assists, followed by veteran Jeremy McKenna with 77 points including a team-high 38 goals.

“We want to finish first just like we want to win,” Pelletier told Roby St-Gelais of Le Journal de Quebec. “There are several players who have new roles. We have to adhere to that. We have more depth. If there is an evening when the first line does not work, the second will wake up or even the third line. This is what can allow us to go far.”

In all, the veteran-laden Moncton group now counts eight players who have heard their names called by NHL clubs on Draft Day, including defencemen Axel Andersson (Boston Bruins), who was the club’s top pick in the 2019 CHL Import Draft, and Jordan Spence (Los Angeles Kings), as well as netminder Olivier Rodrigue (Edmonton Oilers). Up front, the Wildcats are also seeing a strong showing from rookie left-wing Zachary L’Heureux who will undoubtedly hear his name called early in 2021 scoring just shy of a point-per-game pace with 19 goals and 30 assists across 51 appearances to rank third among freshmen scorers league wide.

“To grow, you want to measure yourself against good teams and there is no hiding that the Eastern (Conference) is very competitive,” added Wildcats head coach Daniel Lacroix, who since taking over behind the bench in late December has guided the club to a 23-3-1-0 showing, per Jonathan Hudon of Le Quotidien. “Teams like Rimouski, Chicoutimi and Cape Breton are very solid, without forgetting that there is no easy match.”

While the Wildcats are a leader offensively, the team is also solid in its own zone, deploying a defensive core that owns plenty of ability to move the puck up ice, beginning with Spence, who after finishing in the top-10 in rearguard scoring as a rookie last season has continued to impress in 2019-20, already matching last season’s 49-point finish with only four defenders outpacing that production league wide.

Meanwhile, Moncton also brings one of the QMJHL’s top netminders in 19-year-old Rodrigue, who has suffered just six regulation losses through 36 appearances this season while coming up with a sparkling .915 save percentage that sits tied for first league-wide among goaltenders to have seen as much time in the crease this season.

As the regular season enters its closing weeks, the Wildcats will now look to continue their formidable point streak with upcoming dates coming against the Acadie-Bathurst Titan on Thursday before a two-game weekend facing off with Quebec Remparts and Drummondville Voltigeurs.