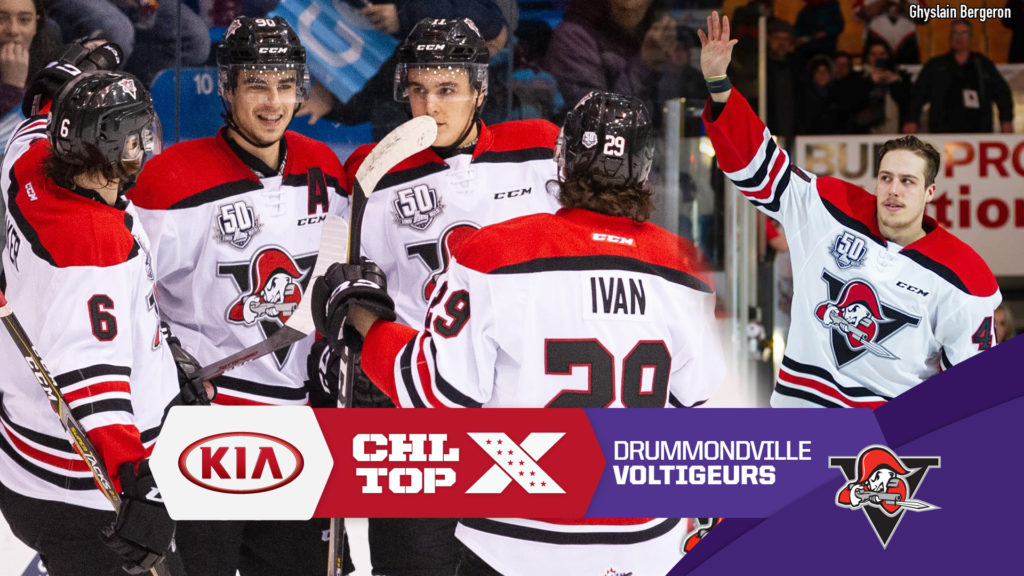 Boasting the CHL’s highest powered offence, the Drummondville Voltigeurs have won 11 of their last 13 games and aren’t showing any signs of slowing down.

Detroit Red Wings prospect Joe Veleno, the QMJHL’s first and only player to be granted exceptional status, is currently tied for the league scoring lead with another young phenom in Rimouski’s Alexis Lafrenière. Veleno has been on a tear of late, putting up points in each of his 11 February contests for a total of 96 (40-56–96) on the season.

On pace to record Drummondville’s first 100 point season since 2009, Veleno has formed recent chemistry with power winger Maxime Comtois who has greatly benefitted the Voltigeurs since returning from the NHL’s Anaheim Ducks. Comtois has put up 24 goals and 39 points over 19 contests including 15 goals over his last seven outings.

“It’s great with Joe,” said Comtois following Sunday’s 6-0 win over the Chicoutimi Saguenéens that saw the two combine for six points on a line alongside Brandon Skubel (11-39–50). “It’s easy to play with him. He’s explosive and he’s a great passer,” he told Frederic Marcoux of the Journal Express.

Last week’s CHL Player of the Week, Comtois compared his recent success alongside Veleno to the chemistry he developed with former Victoriaville Tigres linemate Vitalii Abramov who was dealt from the Columbus Blue Jackets to the Ottawa Senators this past week.

“Both of those guys play at high speed and they have very good hands,” he continued to tell Marcoux. “It’s a bit the same for me to play with Veleno or Abramov.”

Veleno and Comtois are just the tip of the offensive iceberg in Drummondville as the Voltigeurs boast eight different players with 20 goals or more.

In the crease, Edmonton Oilers second round pick Olivier Rodrigue leads the QMJHL with a single season franchise record 35 wins to go with a 2.32 goals-against average, .904 save percentage and three shutouts.

Nine games remain on the regular season schedule as the Voltigeurs face some remaining challenges in a big matchup with the first place Rouyn-Noranda Huskies on the road Friday night. They’ll take on the Baie-Comeau Drakkar next Wednesday before a rematch with the Huskies at Centre Marcel Dionne on Friday March 8th.

“They’re going to be like playoff games,” Comtois told the Journal Express’ Jonathan Habashi in anticipation of facing Rouyn-Noranda. “The Huskies play well defensively. They don’t give up a lot of goals. On our side we will have to play the game our way. When we do that we’re hard to beat.”

Rouyn-Noranda has taken three of the four meetings between the two clubs this season, giving Steve Hartley’s Voltigeurs a challenge to meet in the stretch drive toward the 2019 QMJHL Playoffs when Drummondville will begin on home ice.