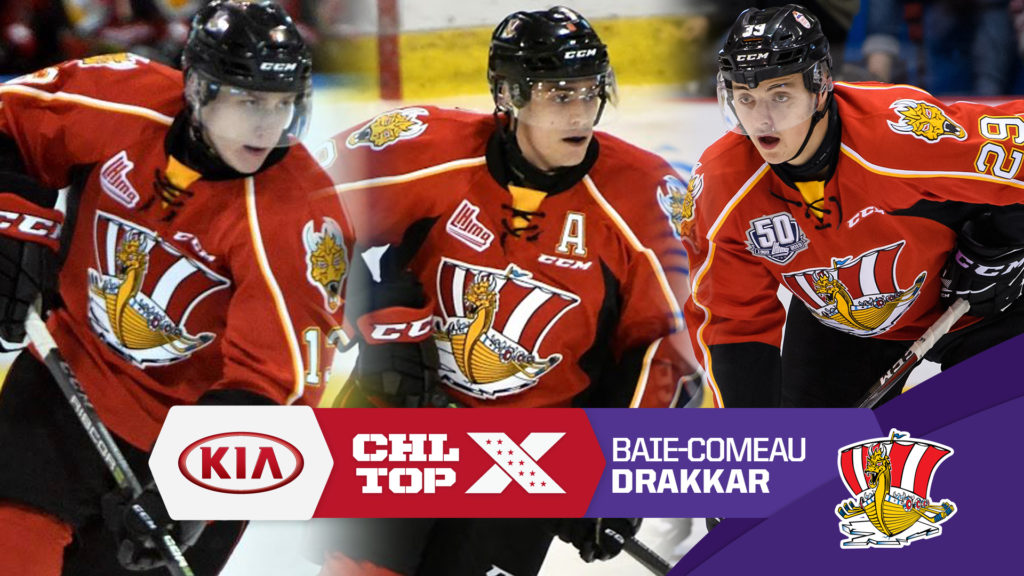 We last checked in on the Baie-Comeau Drakkar in mid-November when they were the seventh-ranked team in the CHL. Fast forward to late January and they’re still in the thick of things, leading the QMJHL’s Eastern Conference with a 36-9-2-1 record.

Arguably the hottest team in the CHL right now, head coach Martin Bernard’s Drakkar have won a franchise record 13 in a row and boast one of the country’s best power plays, one operating at 29.3%.

The Drakkar are the Kia CHL Top 10 Spotlight’s first team to be featured twice this season, with a recent 3-0 road trip in the Maritimes demanding some attention.

“We’re coming back from the Maritimes with three wins in three games, including our biggest challenge in this third game. I tip my hat to the players who have done the job to the end,” Bernard told Le Manic’s Sandro Célant of victories in Saint John, Bathurst and Moncton.

After a 5-3 win in Saint John on Friday, Ethan Crossman potted a hat-trick against his former club in an 8-0 win on Saturday. Crossman won a Memorial Cup title with the Acadie-Bathurst Titan last spring and finished the weekend with seven points (5-2–7) over the three contests to earn QMJHL and CHL Player of the Week honours.

The 13-game winning streak wasn’t the only franchise record set over the weekend as Drakkar netminder Lucas Fitzpatrick posted his second straight shutout on Saturday, extending his run of perfect play to a new club benchmark of 171:27.

The Titan wrapped up the trip on Sunday with a win in their biggest challenge, defeating the Moncton Wildcats 4-3 as Crossman, Yaroslav Alexeyev, NHL Draft hopeful Nathan Légaré and Tampa Bay Lightning prospect Gabriel Fortier found the back of the net.

Just as we he was the last time Baie-Comeau was featured in the Kia CHL Top 10 Spotlight, San Jose Sharks draft pick Ivan Chekhovich is the QMJHL’s leading scorer, racking up 80 points (36-44–80) over 46 games. The aforementioned Légaré recently competed in the Sherwin-Williams CHL/NHL Top Prospects Game and trails close behind in the goal-scoring department with 35 markers and 66 points over 48 contests.

“We worked with a group of players for three years,” said Bernard of Baie-Comeau’s development model. “We drafted guys like Fortier, Bouchard and Element and then the next year we added Légaré and Ortiz, so that’s our core we raised in Baie-Comeau. This season we added some big veterans and that’s been exactly what we’ve needed to complete our group.”

.@DrakkardeBaieCo‘s Nathan Legare is a top prospect for 2019 #NHLDraft. Here’s profile of the #Drakkar high scoring 18 yr old after his trip to #CHLTopProspects game. #SportsandMoorehttps://t.co/Cw4padUvl6 pic.twitter.com/eWxaQsLEmC

In addition to CHL Player of the Week Crossman, the Drakkar feature two other Memorial Cup champs from last spring in shutdown centreman Samuel L’Italien (10-32–42) and 19-year-old defenceman Keenan MacIsaac (2-15–17). Pascal Corbeil (0-12–12) and Thomas Ethier (8-6–14) were additions from the Blainville-Boisbriand Armada who reached the QMJHL Championship Series in each of the past two seasons.

Loaded with playoff experience, the Drakkar continue their march to the postseason on home ice this weekend as they face a big test on Friday when the Drummondville Voltigeurs visit Centre Henry-Leonard. The Chicoutimi Saguenéens will visit on Saturday afternoon.