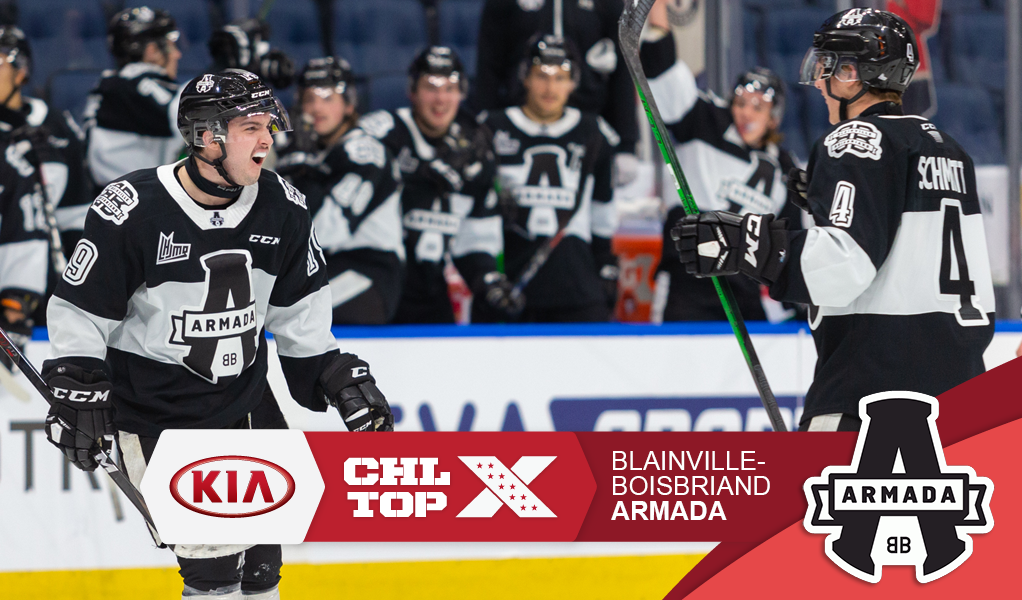 The Blainville-Boisbriand Armada are battle ready.

Sitting third place in the QMJHL with 29 points across 20 appearances, the Armada have continued to build off a successful 2019-20 campaign in which prior to the pandemic pausing play the club was poised to claim its fifth division crown in only its ninth season.

Led by 20-year-old captain Luke Henman, the gifted playmaker pushes the pace offensively in Blainville-Boisbriand as he tops the squad in scoring with 30 points counting 11 goals and 19 assists on the season. That performance comes on the heels of an impressive showing in which Henman saw a 28-point improvement a year ago to finish with a chart-topping 74 points.

Currently competing in his fourth full season in Blainville-Boisbriand, Henman has been a driving force in helping the Armada put together a formidable year that began with nine straight victories.

Left unsigned by the Carolina Hurricanes this past offseason following his fourth-round selection in the 2018 NHL Draft, that decision has only added motivation for the scoring forward.

“I felt like I had a really good year. Things didn’t work out with Carolina and that is life,” Henman said. “I definitely think my shooting strength and my release got better. That really helped me. I also think my skating improved a lot. I don’t think another year of junior is going to be bad for me. I need to get a bit bigger and a bit stronger and hopefully have a good year so I can get to the next level.”

A native of Dartmouth, N.S., Henman has spent his entire junior career with the Armada, debuting in 2016-17. A natural leader, Henman accepted the captaincy last season.

“I think (last year) was a really good season for me. Our team surprised a lot of people,” Henman added. “I had a bit of slow start last year and then picked it up. I proved to myself that I can be a dominant player in this league. I am going to try to lead the best way that I can and hopefully the rest will work itself out.”

Up front, Henman is joined by fellow overager Mathias Laferriere, a 2019 draftee of the St. Louis Blues who headed to the Armada following a mid-October addition from Cape Breton. A sizable centre who is equally adept at lighting the lamp himself as he is at setting up his teammates, Laferriere was originally chosen seventh overall in the 2016 QMHL Entry Draft and has delivered offensively over his 226 career contests in which he has collected 200 points.

Elsewhere, rounding out the club’s offensive ranks includes Russian-born left-wing Yaroslav Likhachev as well as fellow 19-year-olds in Benjamin Corbeil and Simon Pinard, all of whom provide excellent secondary scoring support for the Armada.

The team’s strength then continues on the back end that is headlined by third-year blue-liner Miguel Tourigny, a new-age style defenceman who balances his diminutive stature with a talented puck-moving skill set. Seven times this season, Tourigny has finished with two or more points, including a dominant four-point effort versus Rouyn-Noranda in early February that saw him tally a goal plus three assists. The 18-year-old native of Victoriaville, Que., is slated for selection in the 2021 NHL Draft per Central Scouting.

Of course, Tourigny has not been left alone to hold down the fort in his own end. With the club carrying championship aspirations, the Armada brought in reinforcements ahead of the league-wide trade deadline, adding seasoned rearguard Christopher Merisier-Ortiz from Baie-Comeau. Following a solid start to the season with the Drakkar, Merisier-Ortiz has carried over that performance with his new club in scoring above a point-per-game pace with one goal and 12 assists through 13 contests.

Rounding out the group, the blue paint sees 18-year-old Olivier Adam assuming the starter’s role in his second season following the graduation of longtime netminder Emile Samson. With increased duties this season, Adam has delivered as he has found the win column in 11 of his 15 appearances – highlighted by seven consecutive victories – while coming away with a 2.53 goals-against average and .921 save percentage. Eligible for the upcoming NHL Draft, the product of Drummondville, Que., will look to continue to turn heads as the season progresses.

Solid between the pipes and owning a veteran-laden group that can find offense throughout its lineup, the Armada are poised to continue finding the win column as the QMJHL campaign resumes.