Kia CHL Top-10 Rankings: Remparts and Titan round out the top three 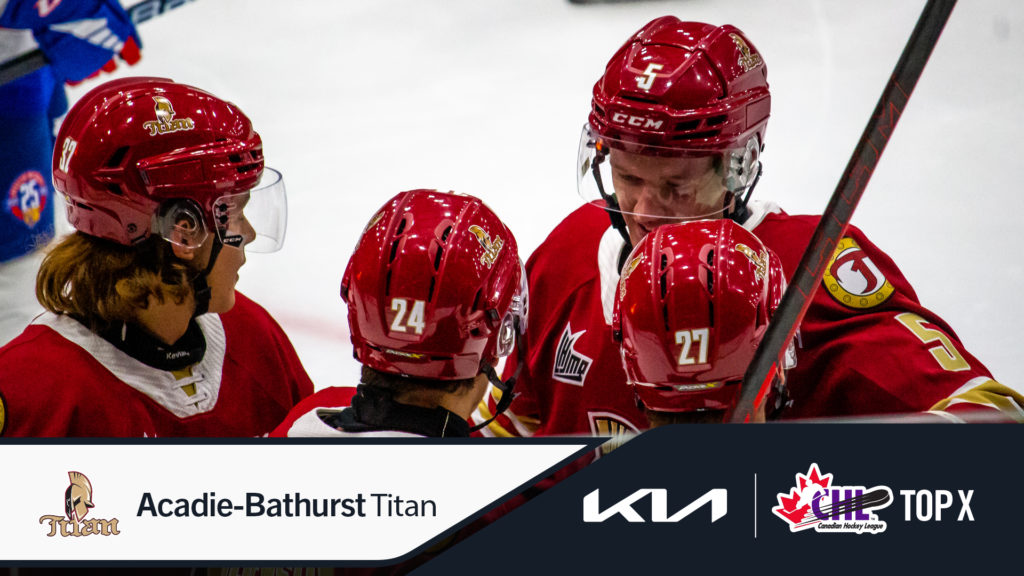 Headlined by recent first-round selections in right-wing Dylan Guenther (Arizona Coyotes) and goaltender Sebastian Cossa (Detroit Red Wings), the Oil Kings took one of two contests to begin the new WHL campaign, picking up a season-opening 4-1 win versus provincial rival Red Deer in which overage forward Josh Williams netted his fourth career hat-trick. Loaded with offensive talent, the Oil Kings also remain hopeful for the return of rugged left-wing Jake Neighbours who is currently putting together an impressive showing in training camp with the St. Louis Blues. A first-round selection in the 2020 NHL Draft, Neighbours led the Oil Kings in scoring last season with 33 points in 19 games.

One of three WHL squads to earn recognition in the Kia CHL Top-10 Rankings, beyond Edmonton the Week 1 rendition also includes returnees in the Winnipeg ICE, who move up four slots, as well as the Portland Winterhawks, who drop to No. 10. In Winnipeg, the ICE put on a dominant performance to begin the new season, hammering the Manitoba rival Wheat Kings in back-to-back affairs in which the winning side combined for a plus-14 goal differential. Through the opening weekend, a pair of fourth-year forwards from the ICE stand atop the league in scoring headlined by 2002-born left-wing Owen Pederson who collected six points in two games as well as fellow 19-year-old left winger Mikey Milne who picked up two goals and three assists through the two-game weekend set. Rounding out recognition from the WHL is the Kamloops Blazers.

Holding strong at No. 2 in the latest Kia CHL Top-10 Rankings is the Quebec Remparts who won one of two games to begin the new campaign. Following a hard-battled 3-2 season opener versus the Oceanic, the Remparts turned the tables two nights later in Rimouski, coming away with a 5-3 victory in which third-year forward Zachary Bolduc made his season debut after returning from Blues’ training camp one day prior. It was undoubtedly a circled contest for Bolduc who made his return to Rimouski following an offseason deal in which he shifted to the Remparts after spending the first two seasons of his career with the Oceanic. The talented centre ultimately made the most of the Sunday showdown as he wrapped up the night with a three-point performance that counted the eventual game-winning tally. In all, Bolduc was one of three players to come away with multi-point efforts alongside veteran forward Christophe Farmer and newly minted Remparts captain Theo Rochette.

The Remparts are one of four QMJHL clubs recognized in the latest Kia CHL Top-10 Rankings alongside the Acadie-Bathurst Titan, who rise to No. 3 in place of the 2022 Memorial Cup host Saint John Sea Dogs, who drop to ninth, as well as the Charlottetown Islanders who climb to No. 7 after earning honourable mention a week earlier. The Shawinigan Cataractes are also recognized in the honourable mention category in the most recent edition.

For the Titan, the club began the new season coming away with a pair of victories versus Moncton, once again seeing a strong performance from veteran forward Bennett MacArthur who wrapped up the weekend tied for top spot in league-wide scoring after netting six points counting two goals and four assists in the two-game set. MacArthur, 20, saw a breakout performance last season where through 33 appearances he registered 40 points including 28 goals that ranked third in the QMJHL, ultimately helping him to earn an invite to the Coyotes’ development camp. Meanwhile, Acadie-Bathurst has also witnessed a strong early-season showing from recent Montreal Canadiens draftee Riley Kidney who recorded six points in two games, while the club still remains hopeful for offensive reinforcement in dynamic centre Hendrix Lapierre, an offseason addition from Chicoutimi who remains in training camp with the Washington Capitals. Rounding out recognition from the QMJHL is the Islanders who after owning the league’s best regular-season showing a year ago reclaimed their winning ways to begin the new campaign in coming away with back-to-back victories versus Saint John.

Additionally, the three OHL clubs – the Kingston Frontenacs, Barrie Colts, and Windsor Spitfires – who earned recognition in the Kia CHL Top-10 Rankings the prior week hold steady with the 2021-22 OHL season set to open Thursday. The latest edition also sees the London Knights once again recognized as an honourable mention. 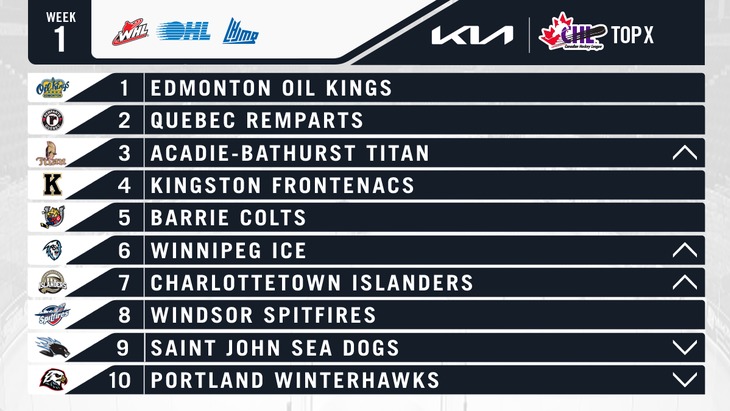