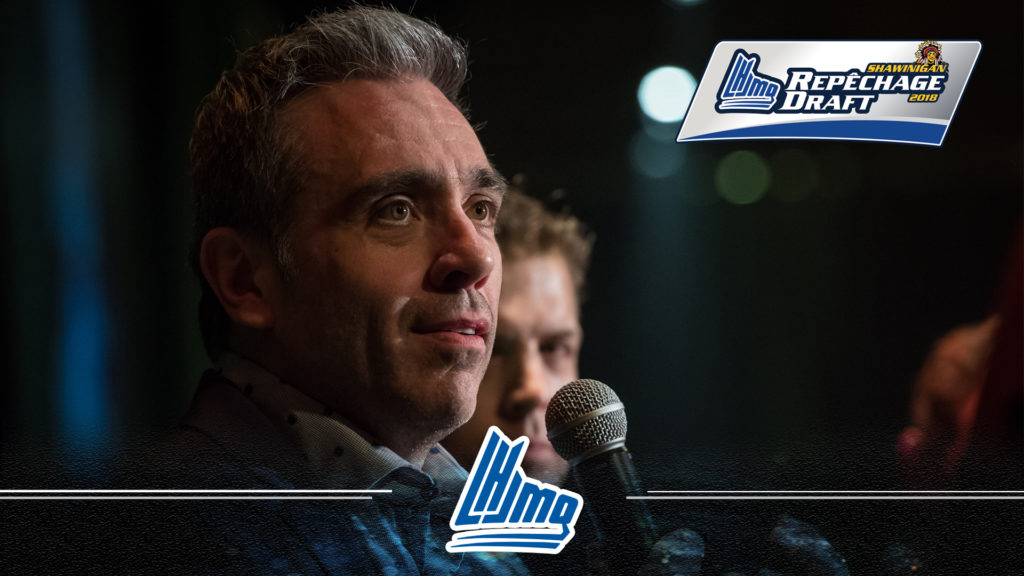 The QMJHL Draft annually represents the start of a new season in a way, but for Joel Bouchard this year it also marked his final official function as general manager and head coach of the Blainville-Boisbriand Armada.

Before making the jump to the AHL as head coach of the Laval Rocket, it was important to Bouchard to complete his transition by taking part in his final Q Draft.

“I will always remain attached to the Armada from an emotional standpoint, but [the draft] was all about doing the necessary work to ensure the next group coming in has the best-possible lineup at their disposal,” explained Bouchard at the draft in Shawinigan.

He made several moves on that Saturday involving draft picks, but he also sent veteran defenceman Antoine Crete-Belzile and a fourth rounder in 2019 to the Cape Breton Screaming Eagles. In return the Armada received right winger Peyton Hoyt, 17-year-old forward Antoine Rochon and a second-round pick in 2018.

“We quite simply had too many defencemen. Antoine is an extraordinary young talent that we like a lot, but sometimes change can be a good thing. Cape Breton has had their eye on him for a long time. I spoke to him [before the trade] and he understands the situation and is looking at it as a fresh start.”

Ready for liftoff and a new challenge

The Armada will begin a whole new era this week and after interviewing several coaching candidates, the reins will finally be handed off to Bruce Richardson.

“It takes a lot for me to get emotional! I am not sad to leave, my relationship with Marc [Bergevin] is great and a nice challenge now awaits me in the Canadiens’ organization”, said Bouchard. “This situation will also give someone [like Bruce Richardson] the chance to progress in junior hockey.”

Bouchard has left his successor with a balanced group of both quality veterans and young players and several draft picks in the bank. He remains the owner of the Armada but will no longer be associated with the club’s hockey operations.

“I will now follow them as a fan! I have a full-time job to do with the Rocket, but junior hockey will always be important to me. I will come watch the boys play whenever my schedule allows for it, that’s for sure!”

As one junior hockey ambassador moves on, another one returns. After a five-year absence from the QMJHL, Patrick Roy is back at the Remparts’ helm as both general manager and head coach.

“Everything is going very well. I spent ten years with Quebec and many employees [I worked with] are still with the organization. That makes things easier since they know the way I like to operate.”

The Remparts’ scouting staff, on the other hand, has changed quite a bit. And even though Roy didn’t have much of a chance to get to know them, he showed tremendous confidence in them by allowing them to completely handle the latest draft day.

“They are the ones that are in arenas almost every night. They are also the ones who go to watch these players all year long. They put in the time and effort”, Roy mentioned on draft day. “My job is to provide them guidance and explain what type of team I would like to have. We often talk about what kind of identity we want to have. I present them with our needs, and they handle the rest by finding solutions and names.”