CHL Player of the Week
CHL 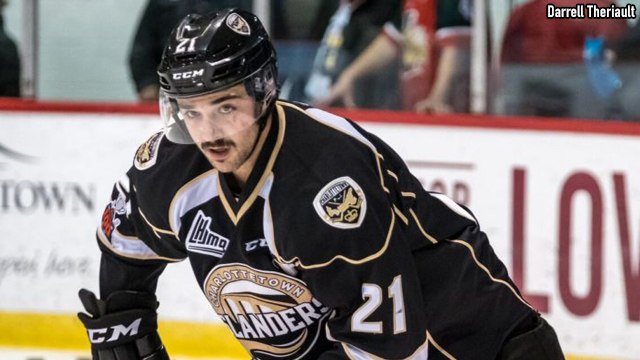 Toronto, ON – The Canadian Hockey League today announced that forward Pascal Aquin of the Charlottetown Islanders is the CHL Player of the Week for the playoff week ending April 8 scoring six goals and one assist for seven points in four games with a plus-minus rating of plus-8.

Aquin was instrumental in the Islanders first round QMJHL Playoffs victory against the Quebec Remparts and has continued his strong play into second round action against the Halifax Mooseheads.  After the Remparts evened the series with a 5-2 win last Monday, the Islanders faced the challenge of a Game 7 on the road Tuesday night.  Aquin delivered a masterful performance with four goals including the game’s opening tally plus three markers in the final frame to earn first star honours in the 8-3 victory.  The momentum continued to Halifax where the ninth place Islanders have opened Quarter-Final action with two road wins over the fourth place Mooseheads.  Aquin scored the overtime winner in Friday’s 4-3 victory in Game 1 to earn third star honours, then scored a goal and an assist and was named second star in Saturday’s 7-4 triumph in Game 2.  The series continues Tuesday and Wednesday night back in Charlottetown.

A 20-year-old from Le Gardeur, Quebec, Aquin is playing in his fourth QMJHL season and second with the Islanders where he scored a career-high 24 goals and 19 assists for 43 points in 59 regular season games before adding eight goals and three assists for 11 points in nine playoff contests to date.  He was originally chosen in the fifth round of the QMJHL Entry Draft by the Gatineau Olympiques then played two full seasons with the Shawinigan Cataractes.

Also considered for the award this week was Detroit Red Wings prospect Michael Rasmussen of the Tri-City Americans who scored four goals and three assists in two games of their second round series against the Victoria Royals, and 2018 NHL Draft prospect Andrei Svechnikov of the Barrie Colts who scored three goals and one assist for four points in three games against the Kingston Frontenacs.