QMJHL Draft
by
Will MacLaren 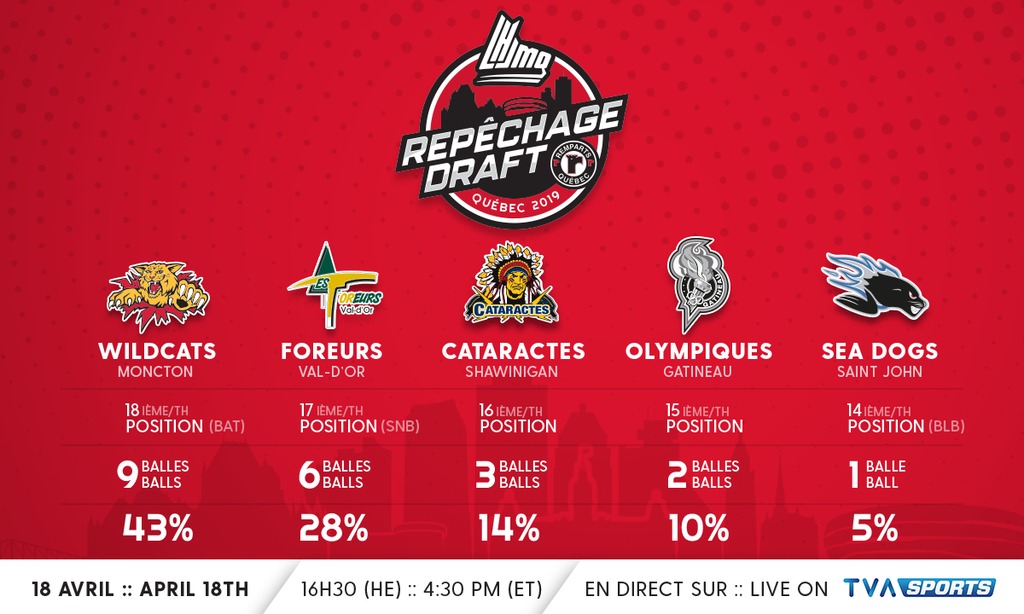 When the 2019 QMJHL Draft takes place at Quebec’s Centre Videotron this June, one of five clubs will have an opportunity to take the stage as holders of the first overall pick in the annual selection. To determine who will win that honor, the league will conduct its annual draft lottery in Montreal later today.

This year, five different franchises, all in distinctly different phases of roster construction, will eagerly wait to see if the draw works out in their favor. Here is a look at those teams:

Among the five clubs vying for the top spot in the draft, none finished the 2018-19 campaign with more success than the Wildcats, who ended the regular season with 85 points. It then produced a seven-game upset victory over a powerful Baie-Comeau Drakkar team before bowing out in the Quarter-Finals to this years Memorial Cup host squad, the Halifax Mooseheads, in a four-game sweep. Despite that setback, the future is bright in Moncton. And thanks to a trade with the Acadie-Bathurst Titan back in December, 2016, that future could get even brighter.

When the Wildcats sent defensemen Adam Holwell and Zachary Malatesta to Northern New Brunswick 28 months ago, the centerpiece of the deal for Moncton was the Titan’s first round selection in this year’s draft. By virtue of the Titan’s last-place showing this year, the Wildcats now hold the greatest odds of selecting first overall with that pick.

Regardless of who the Wildcats decide to potentially select with such a high pick, they will be surrounded with an impressive array of younger talent including forwards Jakob Pelletier and the club’s top selection in the 2018 QMJHL Draft, Elliot Desnoyers, goaltender Charles-Antoine Lavallee and the reigning QMJHL Rookie of the Year in defenseman Jordan Spence. Balancing this young attack are star veterans in possible forward returnees Jeremy McKenna and Mika Cyr and defenseman Jonathan Aspirot, to name just a few.

Other players drafted by the Wildcats who have gone on to play a pivotal role with the club include forwards Steve Bernier (first overall, 2001) and Brad Marchand (second round, 2004), defenseman Brandon Gormley (first overall, 2008) and goaltenders Corey Crawford (first round, 2001) and Nicola Riopel (first round, 2005). Along with Bernier and Gormley, the franchise has selected first overall in draft on one other occasion, when the then-expansion Moncton Alpines took star forward Pierre Dagenais with the top pick back in 1995.

Much like the Wildcats, the team with the second-greatest probability of selecting first overall, the Val d’Or Foreurs, also find themselves in such an enviable position by way of a long-ago acquired draft pick.

Back in January, 2017, the Foreurs sent star forward Julien Gauthier to the Saint John Sea Dogs in exchange for five assets, one of which was the Dogs’ top pick in the 2019 QMJHL Draft. Almost two and a half years later, that transaction gives Val d’Or a 28% chance at reaching the top slot.

The Foreurs are slowly but steadily putting together the pieces necessary to challenge for its first President Cup title since 2014. Last year’s draft saw the franchise acquire three picks in the latter stages of the first round as part of that building process. Those selections – forwards William Provost (13th overall) and Marshall Lessard (16th overall) and defenseman Jérémie Biakabutuka (17th overall) – would all play roles in the Foreurs’ 12-point improvement during this past regular season. They would then help push the Victoriaville Tigres to the brink before ultimately falling in overtime of the seventh game in round one in the postseason. These youngsters, along with other potential returning stars such as forward Nicolas Ouellet, defenseman Maxence Guenette and goaltender Jonathan Lemieux will be looked upon to fill the gaps left behind by graduating forward Julien Tessier and defenseman Felix Boivin.

The player that potentially lands in Val d’Or courtesy of this pick will become part of a franchise with an extensive history of mining star power from various points of the draft. That list includes forwards JP Dumont (second round, 1994), Steve Begin (second round, 1995), Simon Gamache (fifth round, 1998) and Anthony Mantha (fifth round, 2010), defensemen Danny Groulx (first round, 1997), Luc Bourdon (third overall, 2003) and Kris Letang (second round, 2003) and goaltender Roberto Luongo (second overall, 1995). Former first overall selections of the Foreurs include forwards Stephane Roy (1993) and Olivier Archambault (2009) as well as goaltender Maxime Daigneault (2000).

The Cataractes were one of the youngest teams in the league last year. After missing the playoffs in 2018, no less than 11 players born in either 2001 or 2002 were regular pieces of a lineup that not only clinched a playoff spot on the final day of the 2018-19 regular season but then went on to take the powerful Rouyn-Noranda Huskies to six games in a hard-fought first round President Cup playoff series.

A potential top-three draft pick could arrive on the scene in Shawinigan for the second consecutive year. In 2018, the club selected center Mavrick Bourque in the three-spot. He rewarded the Cataractes by finishing second on the team in both regular season and playoff scoring. He’ll join a crop of returning players who made an impression at the Centre Gervais Auto this past season that also includes forwards Jeremy Martin and Valentin Nussbaumer as well as defensemen Leon Denny and Marc-Antoine Pepin.

Any team with an historical timeline like the Cataractes will naturally witness any number of high-profile players make their way through the club via successful draft selections. However, no other franchise can boast the unbelievable achievement of selecting a pair of QMJHL Hall of Famers in back to back rounds of the same draft as the Cataractes accomplished in 1984, when it took forwards Stephan Lebeau and Patrice Lefebvre in the third and fourth rounds of that draft, respectively. Other players drafted by Shawinigan to leave their mark on the organization include forwards Jason Pominville (fourth round, 1998), Michael Bournival (first round, 2008) and Anthony Beauvillier (second overall, 2013) and defensemen Stephane Robidas (third round, 1993) and Samuel Girard (third overall, 2014).

Despite that far-reaching history, the one thing the Cataractes do not have much experience with is selecting first overall at the draft. The last time it occurred? You’ll have to go all the way back to 1976, when the then-Shawinigan Dynamos took winger Dino Troini with the top pick.

It’s not very often that the Gatineau Olympiques find themselves with the opportunity to potentially select first overall in the draft. In fact, should it occur this year, it will mark the first time ever that the franchise has claimed top slot in the event.

The Olympiques finished 2018-19 with its worst regular season record in three-and-a-half decades. However, it was also a season that saw the club insert upwards of 12 rookies into its lineup on a nightly basis as the franchise began its climb back towards the upper echelon of the “Q”. One of those freshmen was winger Pier-Olivier Roy. The ninth overall selection by the Olympiques in the 2018 QMJHL draft was part of a contingent of young talent that also included centers Mathieu Bizier and Manix Landry as well as defenseman David Aebischer and goaltender Creed Jones among many others.  The prospect of having a top four pick at their disposal will come at the perfect time for a Gatineau squad that will have to deal with the graduation of its top two scorers from the regular season, center Giordano Finoro and defenseman Gabriel Bilodeau, entering the new campaign.

The Olympiques franchise has been one of the great successes of the QMJHL for decades. A by-product of these triumphs is the fact that the club is not frequently granted an exceptionally high rank in the draft. However, the organization has done an admirable job of working with what it’s been given. Impact players to be selected by the Olympiques include forwards Luc Robitaille (fourth overall, 1984), Martin Gelinas (second overall, 1988) and Jean-Gabriel Pageau (seventh round, 2009), defensemen Cam Russell (first round, 1985) and Karl Dykhuis (second round, 1988) and goaltender David Tremblay (second round, 2002).

The last lottery selection in the 2019 QMJHL Draft had to make an additional stop before reaching its current destination.

In January, 2017, the Blainville-Boisbriand Armada, on their way to the first of back-to-back President Cup Final appearances, acquired forward Alex Barre-Boulet from the Drummondville Voltigeurs for a package that included its first-round pick in the 2019 QMJHL Draft. Eleven months later, the Voltigeurs used that pick – along with two other first rounders and a pair of second round picks – as part of the blockbuster deal that saw Joseph Veleno move from Saint John to Drummondville.

As a result of that wheeling and dealing, the Sea Dogs will be participating in the draft lottery for the second consecutive year. In 2018, the Dogs wound up with the second overall selection, which it used on defenseman William Villeneuve, one of three first-rounders selected by Saint John last June along with defenseman Jérémie Poirier and center Josh Lawrence. Overall, six promising 2002-born players would appear in Sea Dogs blue on a regular basis over the course of the season in an effort to kick-start the club’s climb back to the top. Another part of the youth movement in Saint John was the European duo of forwards Maxim Cajkovic and Filip Prikryl, who combined for 77 points on a team that, despite a marked lack of major junior experience and enduring a 19-game losing streak early in the year, missed the postseason by just a single point.

Much like the organization has historically been champions of the ice, the Sea Dogs have also been champions of the draft. Impactful selections by the franchise include forwards Jonathan Huberdeau (first round, 2009), Matthew Highmore (first round, 2012), Mathieu Joseph (third round, 2013) and Veleno (first overall, 2015) as well as defensemen Simon Després (first overall, 2007) and Thomas Chabot (second round, 2013). Should they win the lottery, this would be the sixth time the Sea Dogs have had the opportunity of choosing first overall. Besides Després and Veleno, previous top selections include defensemen Alex Grant (2005), Yann Sauvé (2006) and Luke Green (2014).

Be sure to catch the live results from the 2019 QMJHL Draft Lottery as part of a half-hour special starting at 4:30PM ET on TVA Sports. 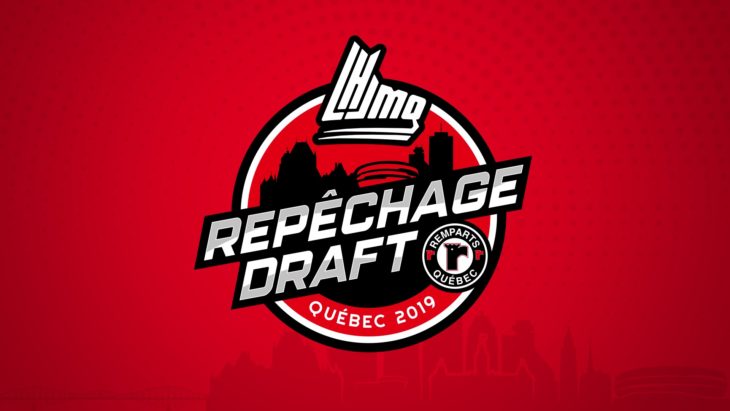