Imama impactful in every way for Sea Dogs 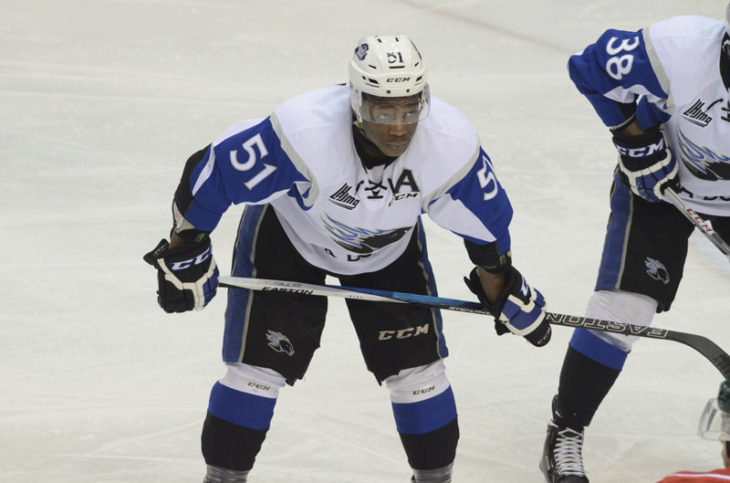 Bokondji Imama has always been a physical force, but he’s also making an offensive impact in his overage season.

The rugged winger had a career-high 19 goals for the Saint John Sea Dogs as mid-December approached. The big man from Montreal credits head coach Danny Flynn for encouraging him to use his heavy, powerful wrist shot.

“Every time that I’m in the offensive zone, Danny wants me to shoot, and that’s what I’m doing,” Imama said. “I’m working on my shot before and after every practice, and it’s paying off.”

At 6-foot-1 and 217 pounds, Imama uses his strength to drive the net and deposit rebounds. But he’s also showing some finesse, scoring on a breakaway in a recent four-goal game. The Tampa Bay Lightning prospect recorded a hat trick in Sunday’s 4-1 win over the Blainville-Boisbriand Armada, a victory that vaulted the Sea Dogs to first place overall in the QMJHL standings.

“His game has improved a lot and he deserves all the credit,” Flynn said. “He’s one of the guys who works real hard on his game every day in practice. He works on his hands, he works on his shot. It’s not luck that he’s improving. He’s working hard at his craft and it’s great to see the benefits he’s getting from that.”

Imama’s presence will be especially important for the rest of December and early January. Three Sea Dogs (Thomas Chabot, Mathieu Joseph and Jakub Zboril) are at world junior training camps.

“We have a short lineup,” Imama said. “We have some guys injured and guys gone for the world juniors, and everyone has a bigger role right now.”

Including Imama, who played on the first line with fellow overagers Matthew Highmore and Spencer Smallman during Sunday’s win over Blainville-Boisbriand.

Imama’s improvement has also stemmed from working with former NHL forward Stacy Roest, the director of player development for the Lightning. Roest made a recent stop in Saint John to work with Imama and Joseph. The two Sea Dogs were drafted by the Lightning in 2015.

“I think Stacy is doing an unreal job with all his prospects right now,” Imama said. “He texts us after games and calls us to see how we’re doing. It’s really helpful to have someone who’s following you like that. It just shows how good the Tampa Bay organization is towards their prospects and everyone in the organization.

“We have a lot of tools to improve and we’re just trying to use them as much as we can. I think Joseph and I are so lucky to get drafted by this team. They have a lot of resources for their younger guys. They talk to us every week and they’re always in contact with our coaches. They want me to become a better hockey player, all around. I worked hard this summer and it’s paying off.”

Imama hopes all that work helps bring a championship to Saint John. He played for the President Cup in his second year with Baie-Comeau, but the Drakkar lost a seven-game final to the Val-d’Or Foreurs. He helped the Sea Dogs reach last year’s semifinals as a 19-year-old, meaning this season is his last shot at a QMJHL title.

“All we want is the Cup,” Imama said. “You play your last year as a 20-year-old, and you want to finish strong. Every day, I think about 2012 when I got drafted into the QMJHL and the excitement about playing major junior. Now, I’m close to the end of my junior career. Time flies. All I can ask for is just to bring the Cup here to Saint John.”

Imama came to Saint John in a trade with Baie-Comeau two years ago. Ironically, that season saw his new team face his old team in the first round of the playoffs, with the Drakkar winning in five games. With this year’s trade period approaching, Imama knows what to say to anxious teammates.

“I’m not going to lie,” he said when asked if it’s a stressful time for certain players. “You see some guys who don’t have experience in those situations, but it’s something you can’t control. Our 20-year-old players have all had five years in the league and we have a lot of 19-year-olds who have been around for four years. We’re just (encouraging) guys to (focus) on playing for the Sea Dogs.”

As a contending team, it’s likely the Sea Dogs will make some moves. And while the extent of those moves will unfold later this month, Imama is proud of what the current group has accomplished.

“When you win, you always have fun,” he said. “We have great coaches and a great group of guys. So far, this is the best year I’ve had, and after Christmas and a playoff run, it can be even better.”