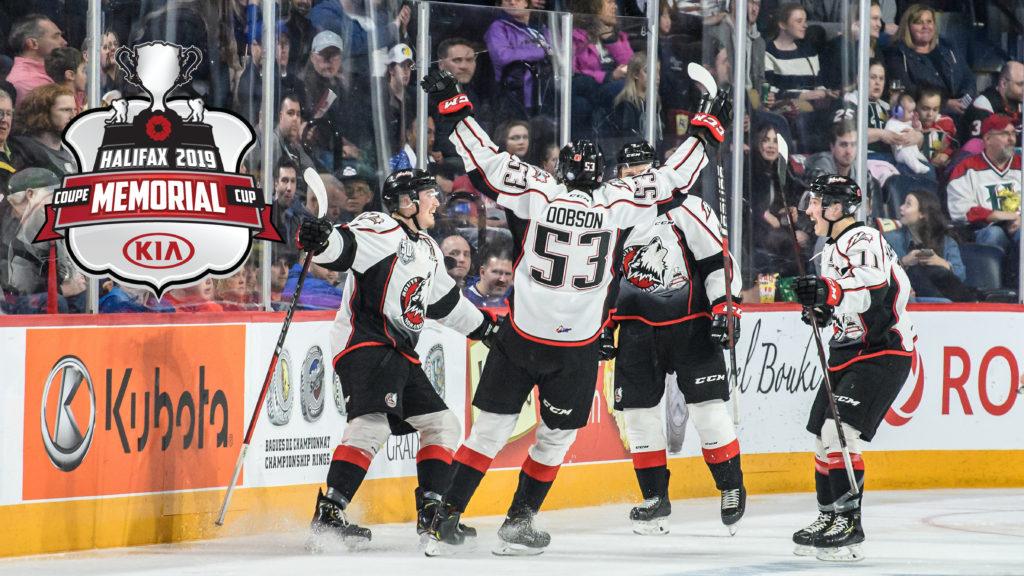 For just the second time in tournament history, it’s going to be an all-QMJHL championship final.

Led by two goals from the game’s first star, Felix Bibeau, the Rouyn-Noranda Huskies outlasted the OHL Champion Guelph Storm 6-4 in the Semi-Final of the 2019 Memorial Cup Presented by Kia on Friday night in Halifax, Nova Scotia.

Alex Beaucage, Joel Teasdale, Tyler Hinam and Rafael Harvey-Pinard also found the back of the net for the Abitibi squad while Samuel Harvey turned aside 34 shots to earn the win in the back and forth affair. The Storm received a pair of tallies from Issac Ratcliffe while singles went to Jack Hanley and Cedric Ralph. Anthony Popovich made 31 saves between the pipes.

With the win, the QMJHL Champion Huskies have punched their ticket to Sunday’s national championship final against their nemesis from the President Cup Final, the host Halifax Mooseheads.

The two league champions would battle to a 2-2 draw after 20 minutes. The Huskies would get on the board first when Beaucage, the trailer on the play, pounced on a loose puck in the slot and fired a backhander over a prone Popovich at the 4:58 mark of the first.

The Storm would reply in quick fashion when MacKenzie Entwistle poked the puck free at his own blueline, creating a two-on-one. Entwistle would feed a pass to Ratcliffe at the hash marks, who would in turn bury a high wrister past Harvey just 90 seconds later.

Hanley would increase the Storm lead to 2-1 exactly one minute later, unleashing a seeing-eye wrist shot through traffic and past a screened Harvey.

Teasdale would draw the Huskies even at the 9:31 mark of the initial frame by stripping a Guelph opponent of the puck in the corner, walking out towards the side of the net and scoring on a wrist shot from close range.

The Storm would reclaim the lead at 5:53 of the second period when Ralph received a pass in full stride down the left wing and surprised Harvey with a wrister to the short side.

Hinam would once again bring the Huskies even at the 6:49 mark of the middle stanza, capitalizing on a wrist shot from a set play off a Peter Abbandonato faceoff win deep in Guelph territory to make it 3-3.

The Huskies would emerge with the lead once more, this time at 5:40 of the third period as Felix Bibeau’s shot from in tight ricocheted off a body and past Popovich.

Bibeau would strike again with 7:27 remaining in the game, converting on a bang-bang play stemming from a Lauko feed from the corner to make it a 5-3 game.

Guelph would make it a one-goal game with 1:13 remaining. On the tail end of a period of sustained Storm pressure, Ratcliffe would collect a cross-crease pass and make no mistake in denting the twine behind Harvey.

At the end of the day, it would be up to the Huskies captain to have the final say as Harvey-Pinard’s empty netter with 2.6 seconds remaining rounded out the scoring, creating the first all-QMJHL Memorial Cup Final since the Moncton Wildcats and Quebec Remparts battled it out in the concluding game of the 2006 tournament.

Sunday’s Final game between the Huskies and Mooseheads is set to take place at 8pm AT and will be broadcasted live from coast-to-coast on both TVA Sports and Sportsnet.