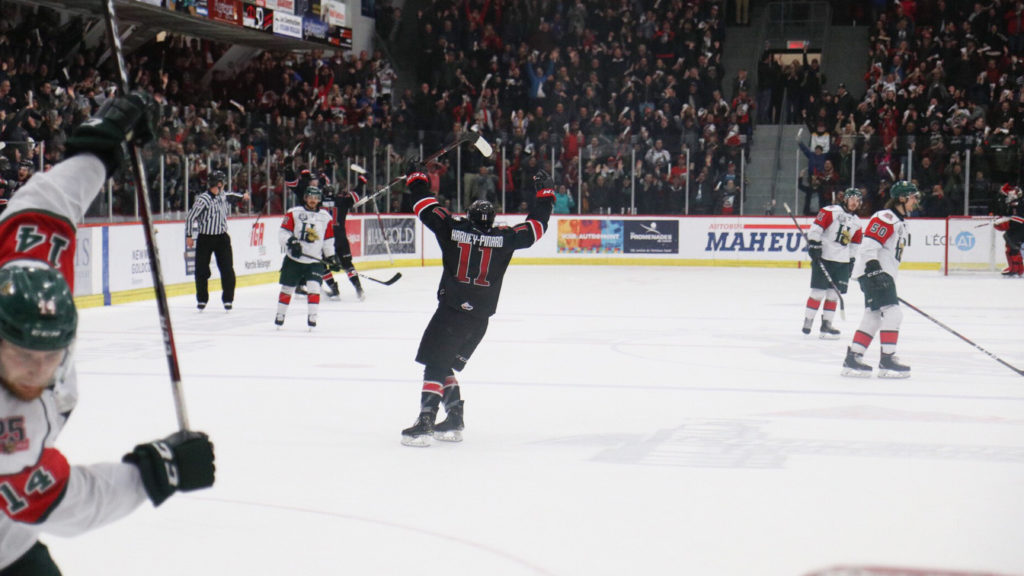 Riding the momentum of a four-goal first period, the Rouyn-Noranda Huskies are now one win away from capturing their second league title in four years thanks to a 6-3 victory over the Halifax Mooseheads in Game 5 of the Rogers President Cup Final at Iamgold Arena on Thursday.

Huskies captain Rafael Harvey-Pinard led the way with a hat trick while league playoff scoring leader Joel Teasdale chipped in three assists for the Huskies, who have lost back-to-back games just once all season. For the Mooseheads, Raphael Lavoie scored once and added an assist while Benoit-Olivier Groulx recorded two assists while Alexis Gravel made 39 saves.

The Huskies immediately went to work to try and avenge their Game 4 loss in Halifax on Tuesday night. At the 5:45 mark, Peter Abbandonato was left unchecked in front of the Halifax net and banged home a loose puck past a prone Gravel for his sixth of the postseason to give Rouyn-Noranda a 1-0 lead.

The floodgates would soon open for the home side. First, it was Harvey-Pinard that would double the Huskies lead with his ninth of the playoffs at 10:08, completing a perfect three-way passing play with Abbandonato and Teasdale.

One minute and forty seconds later, Jakub Lauko would open up a 3-0 lead by tipping home a shot from Justin Bergeron for his sixth of the playoffs.

At the 14:23 mark of the period, William Cyr’s point shot would be deflected at the side of the net to give the Huskies a 4-0 lead.

The Moose would begin to claw back before the conclusion of the frame, however. Arnaud Durandeau was left all alone on the doorstep to convert his tenth goal of the postseason with just over three and a half minutes to go in the first.

The Moose would literally get back to within two in the nick of time as Lavoie deposited his league-leading 20th goal of the President Cup Playoffs past Samuel Harvey at 19:58.

The second stanza was scoreless, largely thanks to the acrobatics of Gravel who held the fort admirably for the visitors as the Huskies built up a 15-4 edge in shots on goal over the course of the period.

The Mooseheads would make it a one-goal contest at the 3:57 mark of the third period when Samuel Asselin made it goals in three straight games as he scored with a backhander on Halifax’s first powerplay of the game.

Harvey would put an exclamation mark on the night by flashing the leather to rob Lavoie of the potential tying goal in the dying minutes, garnering a standing ovation from the enthusiastic crowd.

Harvey-Pinard would tally a pair of empty-netters six seconds apart to complete his hat trick and round out the scoring for the match with under a minute to play.

Will the Huskies capture their second President Cup Title? Will the Mooseheads force a Game 7? The answers will be revealed during Game 6, set to take place at Scotiabank Center in Halifax on Saturday at 4pm AT.