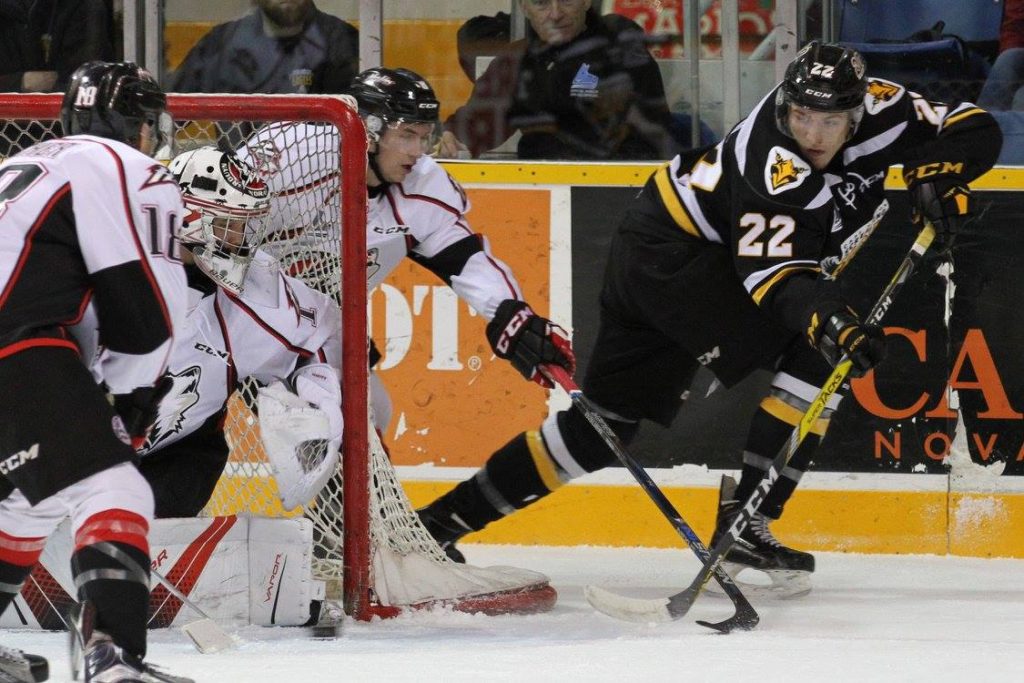 SYDNEY- In their first visit to the shootout this season, the Screaming Eagles fell short in one of the most eventful games to take place at Centre 200 this season. Rouyn-Noranda took a 7-6 victory in a game with no shortage of talking points- or special teams.

Alexandre Fortin didn’t take long to get the party started, winning a battle for the puck in the neutral zone and breaking in to beat Kyle Jessiman between the legs just 14 seconds into the game. With under four minutes to play in the opening period, it looked like it would go to the break 1-0, but both teams found the back of the net. First it was Giovanni Fiore, scoring for the sixth straight game for Cape Breton, wiring a shot that would bounce over Samuel Harvey’s shoulder and in. But just 44 seconds later Antoine Waked would earn a late breakaway and work around pressure from Olivier LeBlanc to restore the Rouyn-Noranda advantage.

JC Beaudin would expand the lead for the visitors early in the second stanza. Beaudin started a three way passing play to Waked which Mathieu Boucher failed to finish, but the rebound was left for Beaudin to tap into the open goal. The visitors were now ahead 3-1 but the Cape Breton power play would take over before the end of the period.

Phélix Martineau began the comeback, skating up the right side of the ice and stuffing the puck short side. Then it was give and go between Drake Batherson and Pierre-Luc Dubois that would see the game tied- when it looked as though Batherson had run out of room on the left side, he dished it to Dubois in front of the net and he put it through to tie the game.

Dubois would put the home side ahead heading into the third period with the third power play goal of the period for the home team. After the Eagles threw the puck around, with the extra space, Dubois settled in the right faceoff circle. With a lightning quick release into the top corner he made it a 4-3 game for Cape Breton.

He would factor into the game for the Screaming Eagles in the third period, but not in the way he would have preferred. Dubois caught Samuel Naud with a hit along the Rouyn-Noranda bench and was given a five minute major along with a game misconduct. On the same sequence, Waked would pick up a minor penalty and a ten minute misconduct.

Peter Abbandonato would use the extra ice to turn the scoreboard in favour of his team. With the two sides playing four on four, and an extra Huskie would come on to the ice with a penalty coming against Cape Breton, Abbandonato would drive the left side of the goal and convert a diagonal feed from Tyler Hinam to tie the contest. Then, with Waked’s minor expired but Dubois’s major still going, the Huskies moved the puck around and Abbandonato tipped in a Gabriel Fontaine feed and scored the go ahead goal from the the hashmarks.

Hinam would score the next goal himself, converting on a 2 on 1 from Beaudin to put Rouyn-Noranda up 6-4 at 11:16 of the third period. On the play Sacha Roy took Himan down after the goal and was given a minor. Cape Breton was able to kill the penalty and then would create power play magic of their own twice more.

First, Batherson would go to the front of the net and get his stick on a point shot, tipping it through Harvey to make it a 6-5 game at the 15:21 mark. And then 31 seconds later, on yet another power play, some puck movement around the zone saw the puck land on the stick of Massimo Carozza and with Harvey sprawled out, the Eagle forward knotted the game at six.

Remarkably, in spite of the twelve goals the two teams combined for in regulation, they only managed a combined three shots in overtime. The Huskies’ Boucher was sent off for high sticking in the final two minutes but Cape Breton was unable to score on the man advantage. The power play was the eighth of the game for the Eagles, and the fifteenth of the game combined between the two squads.

Just as he started the game with a goal, Fortin would score to begin the shootout, while Batherson would send his attempt over the net. Beaudin was then turned away by Jessiman, while Harvey stopped Fiore low along the ice. Antoine Waked was given an opportunity to end the shootout and made no mistake, beating Jessiman through the legs to give the Huskies the victory.

Prior to the shootout Harvey picked up the win in spite of allowing six goals on 32 shots. Jessiman surrendered six goals on 27 shots.

The Screaming Eagles will now make a one game road trip- the season’s first visit to Moncton to take on the division rival the Wildcats. The puck drops at 7 PM Atlantic time. You can hear all the action on 1270 AM CJCB or online at http://www.cjcbradio.com

Final Shots On Goal: 32-27 in favour of Cape Breton