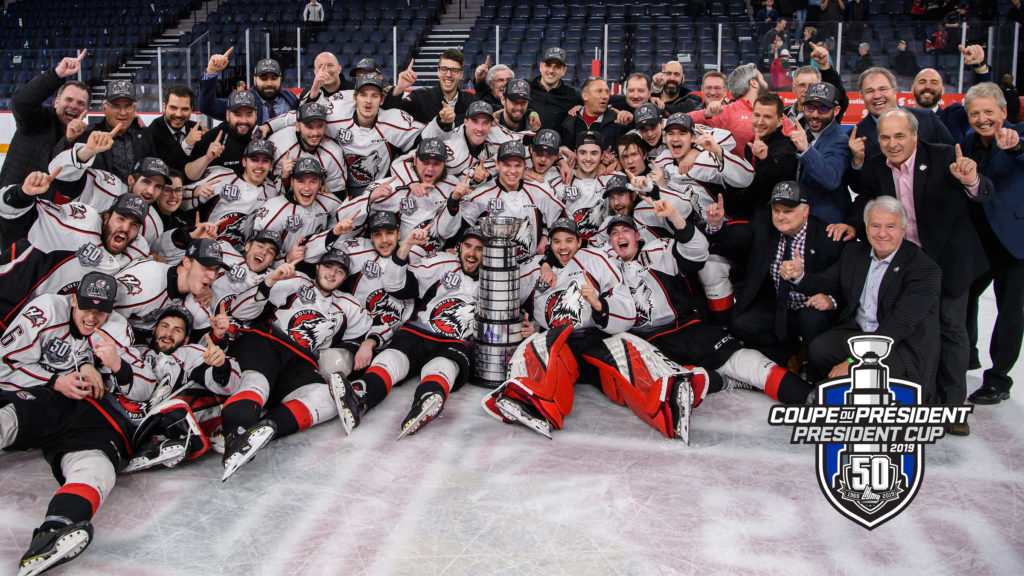 The Rouyn-Noranda Huskies are howling into the Memorial Cup tournament with the second league title in their team’s history.

For the second time in four years, the Abitibi club has clinched the postseason championship, wrapping the title up with a 4-0 triumph over the Halifax Mooseheads in Game 6 of the 2019 Rogers President Cup Final at Scotiabank Center this afternoon.

Tyler Hinam, Rafael Harvey-Pinard (twice) and Alex Beaucage would find the back of the net for Rouyn-Noranda, who previously took home the title in 2016. Noah Dobson, the leading scorer among defensemen in these playoffs, recorded a pair of assists while Samuel Harvey produced a 28-save shutout. The Mooseheads received 31 saves from Alexis Gravel.

After the game, Dobson was handed the Guy-Lafleur Trophy as the Most Valuable Player of the QMJHL Playoffs, largely thanks to his impressive total of 29 points (8G, 21A) in 20 games this spring. He became the fifth defenceman to win the award and the first since Thomas Chabot (Saint John) did it in 2016-17.

The Huskies outshot the Moose 16-7 and got on the board first at the 13:32 mark of the opening period when Hinam cruised into the blue paint uncontested and converted on a feed from Peter Hrehorcak for his fourth goal of the postseason to break the scoreless deadlock.

Gravel would steal the show with three saves in rapid succession with under three minutes remaining in first to keep it a one-goal game heading into the dressing room.

The Huskies doubled their lead at the 10:20 mark of the second period when Harvey-Pinard, fresh off a hat trick in Game 5, deposited a backhander past a sprawling Gravel during a period of sustained pressure deep in Halifax territory by the visitors. For the Huskies captain, who extended his point streak to 11 games, it was his 12th tally of the President Cup playoffs.

The Mooseheads would appear to cut their deficit in half at the 6:32 mark of the third when B-O Groulx placed a point shot past Harvey. However, upon review, the play was ruled offside and the goal disallowed.

Beaucage would make it a three-goal Huskies lead with under seven minutes remaining when he waltzed in on a breakaway and beat Gravel five-hole for his fifth goal of the playoffs.

Harvey-Pinard rounded out the scoring at 4-0 by scoring his 13th of the postseason in an empty net with 1:11 left on the game’s clock.

The scene now shifts to the 2019 Memorial Cup Presented by Kia. Game one of the tournament takes place at Scotiabank Center on Friday, May 17th at 8PM AT, when the host Mooseheads face off against the champions from the Western Hockey League.