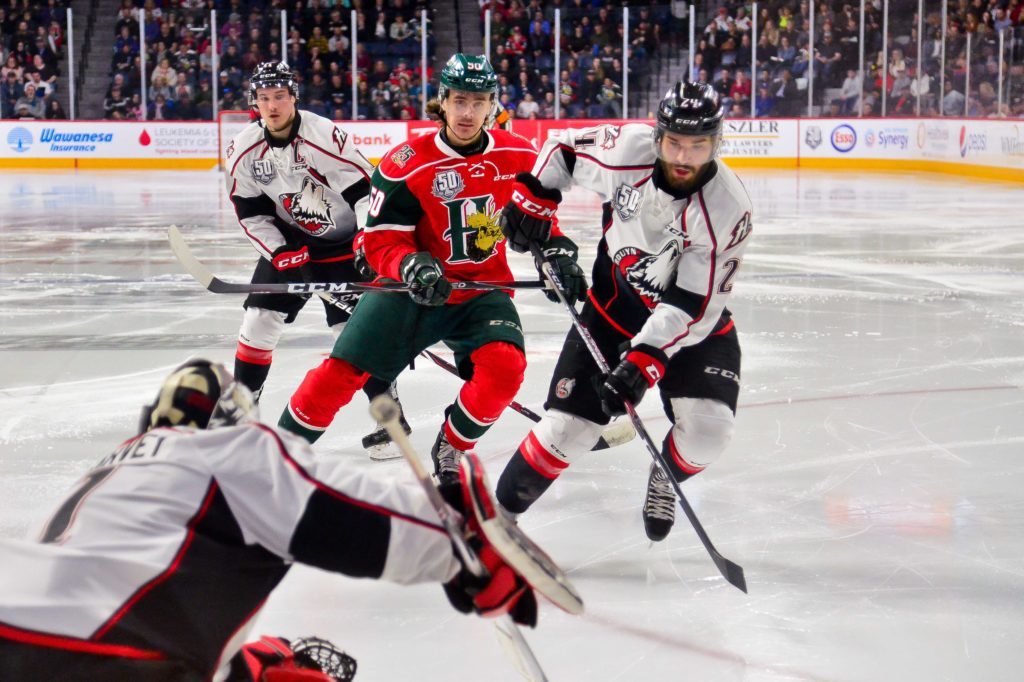 The Rouyn-Noranda Huskies took a 2-1 lead in the 2019 Rogers President Cup Final by skating to a 5-2 win over the Halifax Mooseheads at the Scotiabank Centre on Monday night.

Winger Joël Teasdale and defenceman Justin Bergeron each led the way with a pair of goals in the Huskies win, with Nova Scotia native Tyler Hinam scoring the team’s other goal and captain Rafaël Harvey-Pinard picking up two helpers.

As for the Mooseheads, their goals came from the sticks of Benoit-Olivier Groulx and Samuel Asselin, while defenceman Jared McIsaac picked up his 11th and 12th assists of the playoffs.

Between the pipes, Samuel Harvey turned aside 31 of the 33 Mooseheads’ shots he faced to earn the road win. Down the other end of the ice, Alexis Gravel made 30 saves and surrendered four goals to the Huskies.

Teasdale opened the scoring after toe-dragging his way to the middle of the hashmarks and firing home his 13th goal of the playoffs nearly three minutes into the game. The goal pushed his personal point-streak to 16 games, with his first game of the playoffs being the only time he was blanked from the scoresheet in the postseason.

Just under five minutes later, Groulx scored for the Mooseheads to tie the game back at 1-1 thanks to a perfect one-timer that looked just like his double overtime-winner from Friday.

Bergeron then scored back-to-back goals to allow the Huskies to close off the first period up 3-1. He first scored a shorthanded goal with a slapshot from the faceoff dot at 10:35, before netting the game-winner at 14:12 after joining the rush and redirecting a perfect pass from Noah Dobson behind Gravel.

Defenceman Justin Bergeron nets his second goal of the game and gives the @HuskiesRn a two-goal lead in the opening period. #PresidentCup pic.twitter.com/HQZOFdQ0CO

The Mooseheads made it a 3-2 game 7:37 into the second frame when they struck on the power play after Asselin saw Raphaël Lavoie break his stick and immediately jumped on the loose puck to bank it home.

Huskies forward Hinam would score the only other goal of the second period after cutting in from the boards and firing a five-hole shot to get his third tally of the playoffs.

Tyler Hinam scores his third of the #QPlayoffs to give the @HuskiesRn a 4-2 lead late in the second. #PresidentCup pic.twitter.com/CMxYUtJXWc

Both teams were close to settling for a scoreless third period but Halifax pulled Gravel for an extra skater and Teasdale was able to score his second of the game in an empty net to give the Huskies a 5-2 win over the Mooseheads.

The final’s fourth game will once again be played at the Scotiabank Centre and will take place on Tuesday, May 7th, at 8 p.m. AT.