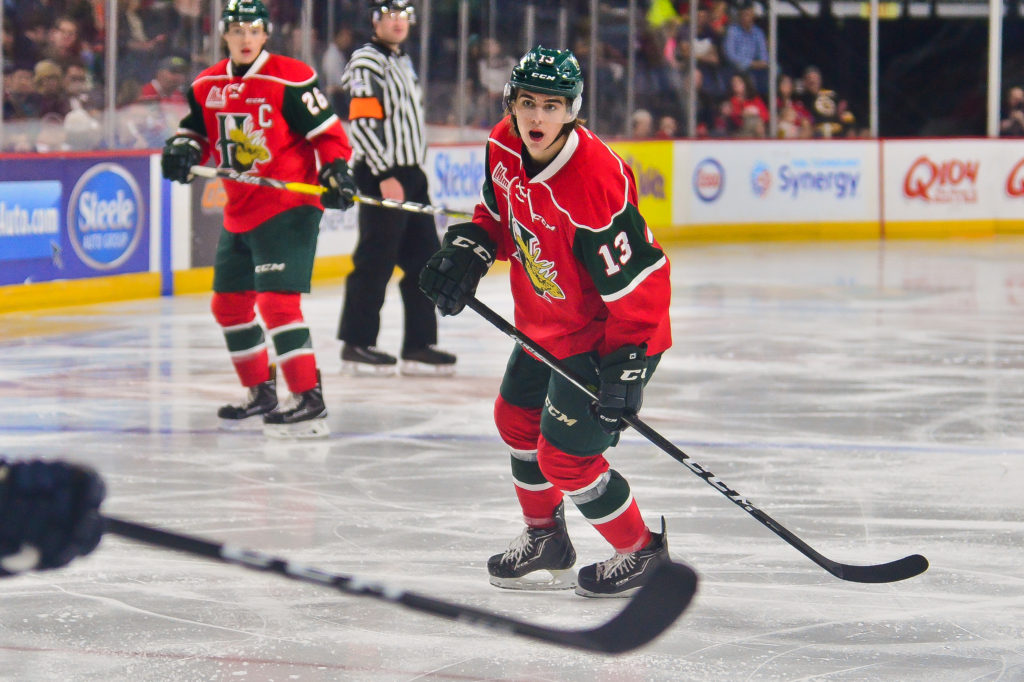 The Mooseheads hit another bump in the road trip on Friday night in Rouyn-Noranda in dropping a 5-1 decision to the defending QMJHL Champion Huskies.

Antoine Waked and Jean-Christophe Beaudin each tallied two goals and two assists while Captain Jeremy Lauzon chipped in with three assists in the win as Rouyn-Noranda improved to a league best 13-3-0-1.

The Herd faced an uphill battle almost from the drop of the puck as J-C Beaudin beat starting goalie Alex Gravel with a wrist shot from the right circle just 16 seconds into the game to get the crowd of 2,144 into it early.

With Mathieu Charlebois sitting in the penalty box for interference, Martins Dzierkals ‘ point shot found the back of the net to put Rouyn up 2-0 only 2:02 after the Beaudin goal.

Super-rookie Nico Hischier cut into the lead late in the opening period when his second attempt after a nice wrap-around move beat Samuel Harvey for his 10th goal of the season. Connor Moynihan and Brett Crossley earned the assists. That proved to be the only offense for the Mooseheads despite plenty of pressure from the young Herd who ended up outshooting their opponents 36-34.

Waked scored back-to-back goals in the second period and Beaudin added his second of the game midway through the third period to round out the scoring.

The Mooseheads (8-10) played without defenceman Jocktan Chainey for the second straight game after he suffered an upper body injury in practice earlier in the week. Rookies Jared McIsaac and Benoit-Olivier Groulx missed their fifth games with both players away at the World Under 17 Hockey Challenge in Sault Ste. Marie, ON. McIsaac scored twice in a marathon nine-round shootout on Friday but his Canada White squad fell 3-2 to Sweden in the semi-finals. McIsaac’s team, which also features Halifax prospect Raphael Lavoie, will face Russia for the Bronze Medal on Saturday afternoon. Groulx’s Canada Red team placed sixth in the tournament.

The Mooseheads wrap up the road trip  in Val d’Or on Saturday night at 8pm against Julien Gauthier and the Foreurs (9-8-1). Etienne Montpetit was outstanding in stopping 38 shots in a 4-2 win over Halifax on October 23rd.

The next Mooseheads home game is Friday, November 11th at 7pm against the Sherbrooke Phoenix.

Tickets are available now at the Ticket Atlantic Box Office at Scotiabank Centre, select Superstore Outlets, TicketAtlantic.com or by phone at 902-451-1221.

Halifax Mooseheads Full Season and 15-Game Ticket Packages for the 2016-17 season are on sale now. Get yours at the Mooseheads Season Ticket Office in Scotia Square Mall, by phone at 902-429-FANS(3267), OR by email at tickets@halifaxmooseheads.ca.