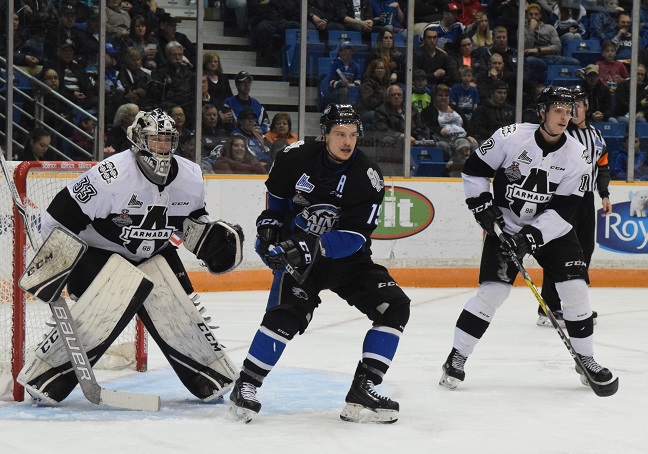 SAINT JOHN – Matthew Highmore and Julien Gauthier had two goals and an assist each to lead the Saint John Sea Dogs to a 6-3 victory over the Blainville-Boisbriand Armada in Game 1 of the Rogers President Cup Final, Friday at Harbour Station.

Mathieu Joseph chipped in with one goal and two assists while Nathan Noel also found the net.

The Sea Dogs have a 1-0 lead in the best-of-seven championship series.

Saint John opened the scoring five minutes into the game with a power play goal.

Joseph took a feed in the high slot, turned and fired a pass toward the net that was redirected by Gauthier past goalie Samuel Montembeault’s left leg.

Highmore made it 2-0 two minutes later with a shorthanded strike.

The overage centre pounced on a turnover at the middle of the Sea Dogs’ blueline and broke away, beating Montembeault with a wrist shot over his blocker.

Melancon’s first of the game cut the Saint John lead in half.

During a delayed penalty call, Melancon drove the net from the right side, found a bouncing puck in the crease and snapped it past a helpless Callum Booth in the Sea Dogs’ goal.

Saint John restored its two-goal advantage three minutes into the second period after creating turnover near the Armada blueline.

Joseph carried the puck down the left wing and ripped a wrist shot that Montembeault denied. Highmore chopped the rebound into the net.

Melancon made it a 3-2 game with nine minutes left in the period, taking a pass at the right point and blasting it past Booth’s glove.

It took only 18 seconds for Gauthier to follow up with his second of the night.

The 2016 first-round pick of the Carolina Hurricanes took a pass on the left side of the Blainville-Boisbriand zone, curled into the circle and whipped a wrist shot to the short side, over the blocker of Montembeault.

But the Armada responded again with three minutes left in the frame when Adams-Moisan took a pass in the left circle and hammered a slap shot past Booth’s glove.

Saint John took a two-goal lead into the second intermission, thanks to a 5-on-3 power play goal from Joseph with 15 seconds left in the frame.

Thomas Chabot fed a pass from the right point to Gauthier at the bottom of the left circle. He quickly snapped it across the crease to a streaking Joseph, who snapped it into an open net to make it 5-3.

Noel wrapped up the scoring with an empty-net goal with two-and-a-half minutes to go, a long wrister from his own side of the red line that snuck inside the left post.

Booth made 24 stops to get the win. Montembeault had 22 saves in the loss.

Three-point games from Highmore and Gauthier made them first and second stars, respectively. Melancon snagged third star with two goals in front of 5,883 fans in attendance.

Game 2 is Saturday, May 6th, at 7 p.m. at Harbour Station. Tickets are available now online, and at the Harbour Station Box Office during regular business hours.