High hopes for Yannick Veilleux with the Wildcats 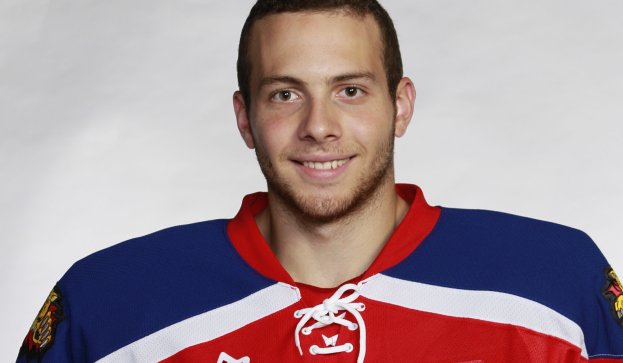 The Moncton Wildcats are counting on Yannick Veilleux to be an impact veteran and he showed even before the season started that he’s ready for the challenge.

The 19-year-old left winger was the overall winner in the club’s physical fitness testing that was done in  training camp. He finished first in pushups and situps and ranked high in tests for flexibility, vertical jump, body fat percentage, 20-metre sprints and cardiovascular.

Veilleux, 6-foot-2 and 208 pounds, is a fourth-year veteran who was the second overall pick in the 2009 Quebec Major Junior Hockey League draft. Moncton acquired him this summer as part of the trade that sent defenceman Brandon Gormley to the Shawinigan Cataractes midway through last season.

“The general testing in camp gives you an idea where everybody is at in terms of physical fitness and if the players did their homework in the off-season,” said Moncton athletic therapist Graham Black. “It shows you something about their commitment level.”

Veilleux was Shawinigan’s third leading scorer last season with a career high 58 points, including 27 goals, in 59 games and he helped the team capture the 2012 Memorial Cup. The native of St. Hypolytte, Que. was a fourth-round pick of the St. Louis Blues in the 2011 National Hockey League draft.

“For him, this is a statement season in terms of getting ready for pro hockey and hopefully signing a pro contract. He practises real hard and he comes to play every night. It’s a credit to him that he came to camp in such great shape because he had a short off-season. He took care of himself throughout the long season and trained hard this summer.”

Veilleux experienced the full gamut of emotions last season with Shawinigan. The Cataractes got eliminated in the second round of the QMJHL playoffs and then endured a one-month break before rebounding as the host team to capture the 2012 Memorial Cup.

Shawinigan was 1-2 in the round robin and had its back to the wall facing elimination. The Cataractes then posted wins in the tie-breaker game and semifinal and capped it off with a 2-1 overtime victory over the London Knights in the championship contest.

“There were lots of ups and downs last season and we had to manage our emotions,” said Veilleux. “I gained a lot of experience playing in high pressure games against top teams. I learned a lot by going through that and I think it helped me develop. I think I grew a lot as a player with everything we went through last season.

“I learned what it takes to win. We went through some adversity and learned from our mistakes. We needed to win three straight games to win the Memorial Cup. We were considered the underdog team going into the tournament so winning that trophy was the greatest feeling I’ve ever had.”

Four members of Shawinigan’s Memorial Cup championship team are now in Moncton. The others are goaltender Alex Dubeau and defencemen Jonathan Racine and Jonathan Narbonne.

“I’ve tried to take what I learned in Shawinigan and bring it with me to Moncton,” said Veilleux. “It’s my fourth season and I’m 19 years old so it’s natural for me to take on a bigger leadership role. The four of us from Shawinigan have influence in the dressing room. When we talk the guys listen.”

Veilleux admits it was a big adjustment coming to Moncton in terms of getting used to new coaches and teammates and different team systems. He got off to a slow start by his standards with five points, including two goals, in the first 10 games.

“Yannick is playing well and he’s bringing lots of things to our team,” said Flynn. “He’s a classic example of a guy that’s working hard and doing lots of good things. He’s getting lots of chances, but he’s had some tough luck around the net.

“I know he’s frustrated because he wants to help the team. The puck is not bouncing for him right now. Hopefully, he’ll get that one goal to get rolling and the puck will start bouncing for him.”