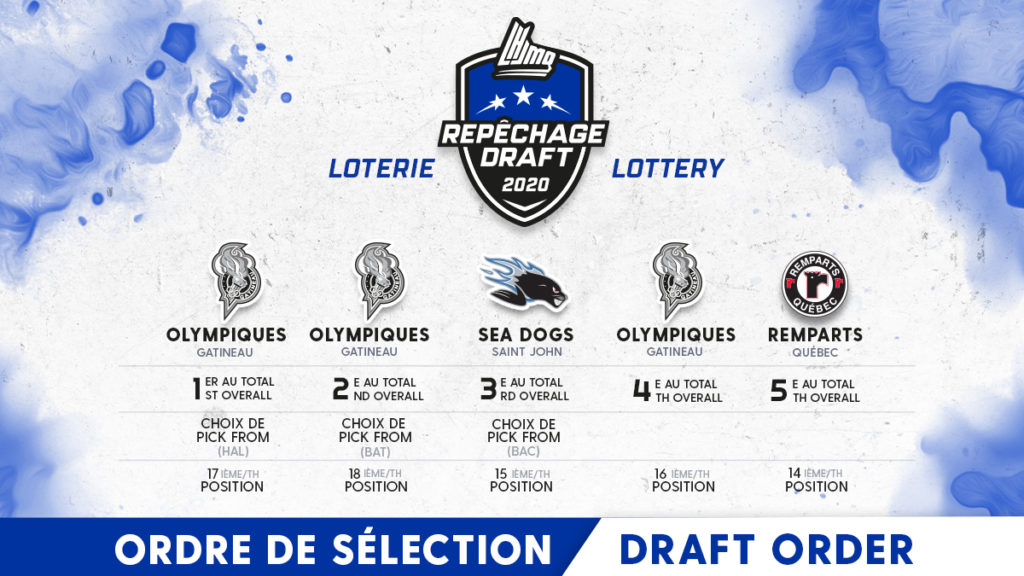 Boucherville, Que. – The long-awaited moment for many teams finally arrived today with the presentation of the lottery awarding the first overall pick of the QMJHL Entry Draft held this upcoming June.

The draw determined the team that’ll be picking first at this year’s online draft. The draw is usually destined for the bottom five teams of the regular season’s overall standings.

This year however, transactions previously made between the franchises allowed the Gatineau Olympiques to take the Acadie-Bathurst Titan’s spot (18th) and the Halifax Mooseheads rank (17th), all while maintaining their own selection at the 16th position.

As for the Saint John Sea Dogs, they dealt with the Baie-Comeau Drakkar in order to get their hands on the 15th rank’s pick, while the Quebec Remparts stayed put at the 14th spot.

With 43% odds, the Titan (now Gatineau) was the favorite to land the very first pick. The four other teams in contention were the Mooseheads (Gatineau) with 28.5% of the odds, the Olympiques at 14%, the Drakkar (Saint John) at 9.5%, as well as the Remparts with 5%.

Following the draft lottery, here is the order of the five teams that will be selecting first next month: