GALIEV SENDS DOGS BACK TO FINAL 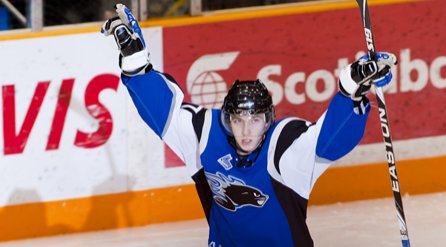 Galiev also scored in regulation, Zack Phillips had a goal and an assist and Charlie Coyle tallied the other Saint John goal as the Sea Dogs captured the best-of-seven Quebec Major Junior Hockey League semifinal series in five games. Mathieu Corbeil made 38 saves, several of them in spectacular fashion, to earn the win in the Saint John net.

Steve Lebel figured in on all three Chicoutimi goals, scoring one and setting up singles by Dominic Poulin and Yoan Pinette. Christopher Gibson had 39 saves in a losing cause for the Sagueneens. Sagueneens captain Gabriel Vermette turned in an outstanding two-way effort, setting up the tying goal late in the third period, and putting his body on the line to save at least three sure goals.

The Dogs were down a man early when Danick Gauthier was called for slashing at 2:40 of the first. Chicoutimi had a chance when Jeremy Gregoire got in behind the defence, but Corbeil made the pad save and stood tall on the rebound try by Etienne Brodeur as well.

The Sea Dogs then got the benefit of a fortunate bounce on a power play of their own at 7:40. Gauthier’s one-timer from the right-wing circle deflected off defender Gabriel Bourret towards Coyle in front, then off the red-hot forward and into the net. Nathan Beaulieu was also credited with an assist on the goal, Coyle’s league-leading 14th.

Just 10 seconds later the Dogs got some more luck when Gibson gave the puck away from behind his own net. Phillips managed not to trip over Galiev as the pair drooled over the chance in front, and the Fredericton product buried it to make it 2-0. Tomas Jurco was credited with an assist for getting a touch on the turnover.

Fortune turned Chicoutimi’s way at the end of the period when Bourret’s point shot hit Lebel in the back and bounced over Corbeil into the net to make it 2-1 at 18:57.

In the final seconds of the period, Jonathan Huberdeau was hauled down on a partial breakaway, setting up a full two-minute power play for the Sea Dogs with fresh ice to start the second. But the Sags were able to kill the penalty, highlighted by captain Gabriel Vermette laying out to block a pair of Sea Dogs shots.

Saint John outshot Chicoutimi 20-10 in the first and at one point in the second held a 25-11 advantage, but the Sags seized the momentum as the middle frame wore on. Chicoutimi outshot Saint John 9-2 in the latter half of the period, and equalized on Poulin’s rifle from the high slot at 12:35. Corbeil was under siege on the ensuing shift, but stared down Brodeur to make a shoulder save. Gauthier had a chance to put the Dogs back in front when Huberdeau set him up in the slot with just under six minutes to go but Gibson denied him from point-blank range. Several solid saves from Corbeil and a miss from the slot on a golden opportunity by Steve Lebel kept the game tied heading into the third.

The Sags kept the pressure on early in the third, generating several chances, but Corbeil was a rock again, particularly as he recovered to make a right pad save on a Guillaume Asselin rebound try to his right. Saint John took the lead on Galiev’s first of the night at 9:21. Villemaire won a puck down low and out front to the Russian sniper, who maneuvered it to his forehand in a hurry and tucked it low to Gibson’s left.

But as they did time and time again throughout the series, the Sagueneens came back, getting the tying goal off the stick of Yoan Pinette at 14:48. The goal was video reviewed as the net was off its moorings, but the officials allowed the call to stand, sending the game to overtime.

The extra frame featured furious action with chances at both ends until Galiev ended it at 11:19. Galiev forced turnover at his own blue line, rocketed up the right wing, stickhandled his way to the net and got a shot past Gibson for the winner.

Game 1 of the President’s Cup final will be held at Harbour Station Friday against either the Halifax Mooseheads or the Rimouski Oceanic. Tickets go on sale at 10 a.m. Tuesday at the Harbour Station box office and can also be obtained by calling 506-657-1234 or online at www.tickets.harbourstation.ca.