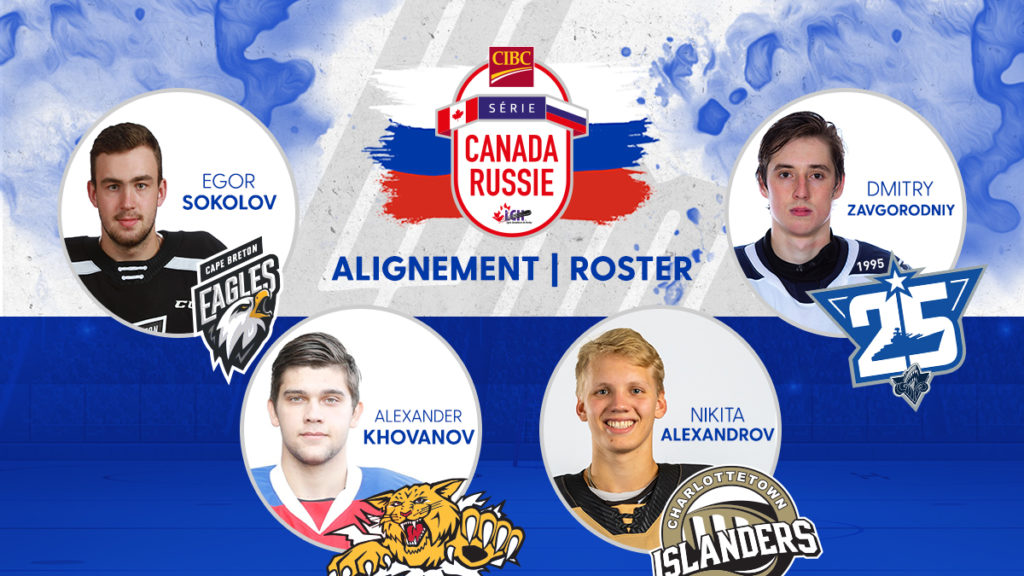 A total of four Quebec Major Junior Hockey League players will be featured on Team Russia competing in the 2019 CIBC Canada Russia Series.

The full Team Russia roster is still to be confirmed however will include four players from the Quebec Major Junior Hockey League, two from the Ontario Hockey League, and one from the Western Hockey League each taking on their regional league counterparts.

The QMJHL players competing in Saint John on November 4 and in Moncton on November 5 include a group of forwards led by Calgary Flames prospect Dmitry Zavgorodniy of the Rimouski Oceanic who was among his country’s heroes in last year’s event scoring in the final seconds of Game 6 to secure the series victory for Russia.  Zavgorodniy has 28 points in 13 games so far this season which puts him third in the QMJHL scoring race, just three points ahead of Egor Sokolov of the Cape Breton Eagles who will also compete in both games.  Nikita Alexandrov of the Charlottetown Islanders who has 15 points in 11 games since being selected by the St. Louis Blues in the 2019 NHL Draft will also represent his country, as will Minnesota Wild prospect Alexander Khovanov of the Moncton Wildcats who leads his team in scoring with 17 points through nine games.

Forward Egor Afanasyev of the Windsor Spitfires gets the call for Game 3 of the series in Kitchener on November 7 against the OHL.  The Nashville Predators second round pick joined the league following the 2019 NHL Draft and has produced 12 points in his first 11 games.  Defenceman Nikita Okhotyuk of the Ottawa 67’s will join Afanasyev in Kitchener and will also play for Team Russia in London on November 11.  The New Jersey Devils prospect has played just two games this season since returning from injury but produced 17 points in 56 games in 2018-19.  Forward

Another defenceman, Egor Zamula, of the Calgary Hitmen will skate in WHL games in Saskatoon on November 13 and in Prince Albert on November 14.  The Philadelphia Flyers prospect currently leads all WHL rearguards with 13 points in nine games.

The most recent international highlights for the group include Zamula, Okhotyuk, and Zavgorodniy competing with Russia at the 2018 IIHF World Under-18 Championship, Afanasyev at the 2017 World Under-17 Hockey Challenge, plus Okhotyuk, Zavgorodniy, and Sokolov in the 2017 Hlinka Gretzky Cup.

The 2019 CIBC Canada Russia series is proudly supported by title partner CIBC, and associate sponsors Kia Canada, Cooper Tires, and Kubota Canada.  All games will be broadcast nationally on Sportsnet and TVA Sports.