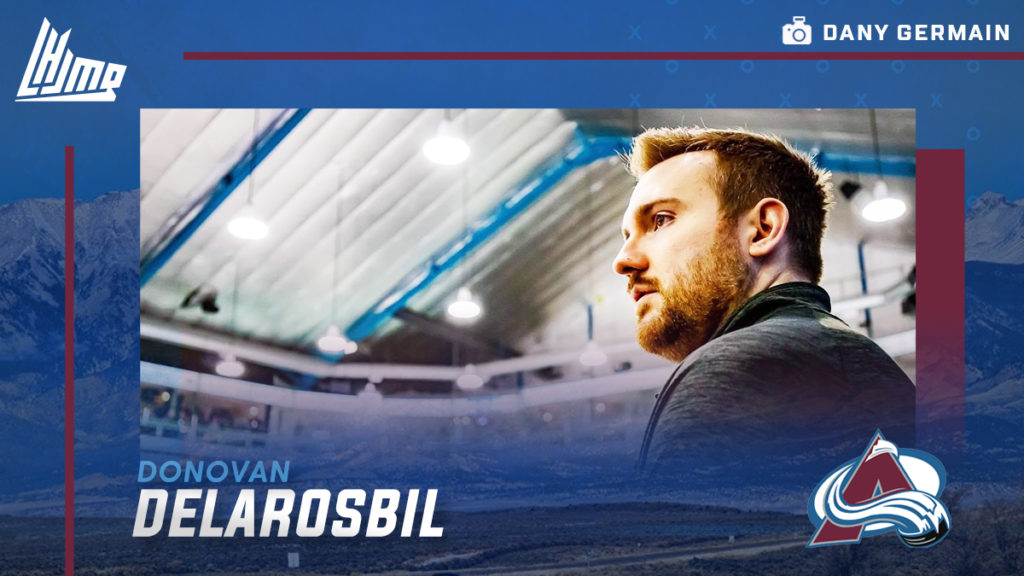 When QMJHL players return in 2021, one of the men who has made them his top priority will by then be setting up shop in a locker room in Denver. That man is Donovan Delarosbil, the newly-minted Assistant Athletic Trainer and Massage Therapist for the Colorado Avalanche.

It’s almost become cliché to point out that everyone who reaches the NHL takes a different route. However, Delarosbil and his history with the game writes a unique story nonetheless.

“I always loved hockey (and) I wanted to be working with sports but more in the shadows, being in background,” the 32-year-old from Gaspe, Quebec recalls.

A graduate of Champlain College and Concordia University, Delarosbil made his way to the Abitibi region as soon as he obtained certification in 2011. To say his introduction to the Val-d’Or Foreurs was an advanced education would be an understatement.

“Things like how to rehab a knee, injury prevention, how to work with the athletes; that’s all stuff you learn in the University program,” he says. “But I got up here my first season and all of a sudden, I’ve got to book a bus, hotels, plan meals and a rooming list. Ordering apparel. There’s a lot of details that you don’t see at all in school. And with the paperwork, the meetings, the insurance programs, there’s a lot of stuff that you don’t really see coming.”

From his first day on the job until now, Delarosbil has added stints behind the bench of Team Quebec at the 2015 Canada Winter Games and Team Canada at the World Under-17 Hockey Challenge to his resume. And it was that resume he casually forwarded to Avalanche Head Athletic Trainer Matthew Sokolowski.

“I wrote an email to Matt that was very easy-going,” Delarosbil explains. “Sort of like: Hey, how’s it going? I heard you were looking for someone. I feel this is a golden opportunity and you miss 100 percent of the shots you don’t take. Here’s my resume.”

“He called me, said he would read over my stuff and get back to me. I didn’t expect that because a lot of positions you apply for like that, you just never hear back”, adds Delarosbil.

“He asked people about me, talked to some of my old players and then called back to see if I was interested in interviewing for the position,” he continues. “We had a Zoom interview that lasted maybe a half hour that was very casual. The next week they called me and asked if I wanted to come join them. I said absolutely!”

Though excited to pack his bags and head west, Delarosbil admits to leaving the only team he’s ever really known – a team with which he won a President Cup in 2014 – with a heavy heart.

“With the group that we have this year, that’s something I’m a little sad leaving,” he admits. “The potential is here for this group. We had some difficult times the past few years in Val-d’Or but I can’t turn down the dream of finally working with an NHL team as a full-time employee. I don’t think it could get any better than raising the Stanley Cup.”

It hasn’t just been the experience in Val-d’Or that’s shaped Delarosbil. The fraternity of Therapists, not to mention Equipment Managers, throughout the “Q” have been a lifeline to one another.

“It’s a real close-knit family,” he remarks without hesitation. “Everyone helps everyone out. The QMJHL has some of the highest calibre Athletic Therapists available. It’s the pinnacle of excellence. They’re people that will go above and beyond for the players and we’re very lucky to have them in the league.”

“This year has been extremely difficult for the Therapists with the COVID-19 restrictions, the adjustments, all the extra cleaning. These are young adults that don’t want to be told to wash their hands and wear a mask all the time. It’s taken patience!”

“Also, we have some amazing Equipment Managers,” Delarosbil continues. “The quality is exceptional and the league makes sure to take care of them. There are also a number of female Therapists in the league that are doing an exceptional job. I believe in the years ahead that there will be opportunities for others to move up. We have a lot of potential in this league.”

It’s potential of people like Delarosbil that has turned countless dreams into reality, both on the ice and behind the benches of the QMJHL.