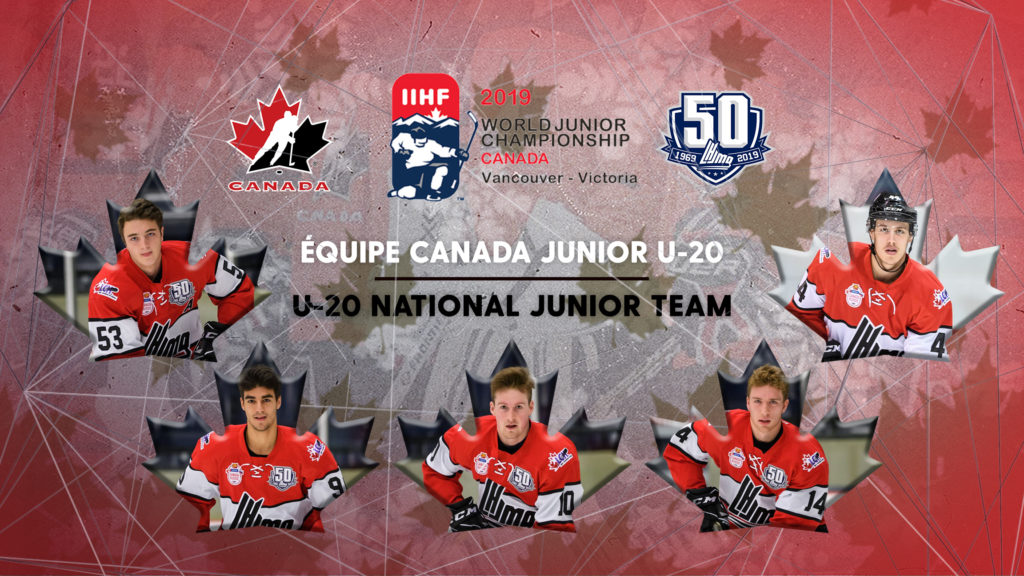 BOUCHERVILLE, Que. – Hockey Canada has finalized its National Junior Team roster ahead of the 2019 World Juniors held in Vancouver and Victoria, British Columbia, from December 26, 2018 to January 5, 2019.

From the list of selected players, you can find five players originating from the Quebec Major Junior Hockey League ranks.

Of the group, only Comtois returns to Canada’s National Junior Team after winning gold in last year’s tournament. The 19-year-old had previous international experience after taking part in both the World Under-17 Hockey Challenge and the IIHF Under-18 World Championship in 2015-16. The following season he first took part in the 2016-17 Hlinka Gretzky Cup tournament, before once again suiting up for Canada at the IIHF U18 World Championship.

Titan captain Noah Dobson represented Canada Red at the 2016-17 World Under-17 Hockey Challenge, before once again wearing the maple leaf during the 2017-18 Hlinka Gretzky Cup where the blueliner skated away with a gold medal.

As for Alexis Lafrenière, the youngest player to suit up for Canada at this year’s World Juniors, he’s played for the red-and-white three times since the start of last season. He first won a silver medal at the 2017-18 World Under-17 Hockey Challenge, before taking part in the same year’s IIHF Under-18 World Championship. The 17-year-old then captained Team Canada to a gold medal during last summer’s Hlinka Gretzky Cup tournament.

Defenceman Jared McIsaac is also no stranger to international competitions. He first represented Canada at the 2016-17 World Under-17 Hockey Challenge before taking part in the same year’s IIHF Under-18 World Championship. He then got the call to suit up at the 2017-18 Hlinka Gretzky Cup, where he won gold alongside Dobson and Lafrenière, before representing his country once more at the World Under-18’s.

Joseph Veleno is another graduate from Hockey Canada’s Program of Excellence. As a 15-year-old, he wore Canada Black’s colors at the 2015-16 World Under-17 Hockey Challenge and then took part in the 2016-17 Hlinka Gretzky Cup the ensuing summer. One year later, he was named captain of the Canadian team that won gold at the 2017-18 Hlinka Gretzky Cup tournament. Veleno also took part in last year’s IIHF Under-18 World Championship.

It is also to be noted that Marc-André DUMONT (Montreal, QC. | Cape Breton, Screaming Eagles) and Jim HULTON (Kingston, ONT. | Charlottetown, Islanders) will be serving as assistant coaches behind Team Canada’s bench, while Brian ST-LOUIS (Hull, QC. | Baie-Comeau, Drakkar) will be serving as one of the team’s equipment managers.

Canada will open the tournament on Boxing Day against Denmark at 8 p.m. ET following preliminary-round games against Switzerland, the Czech Republic and Russia. The bronze and gold medal games will take place January 5, 2019, at Rogers Arena.