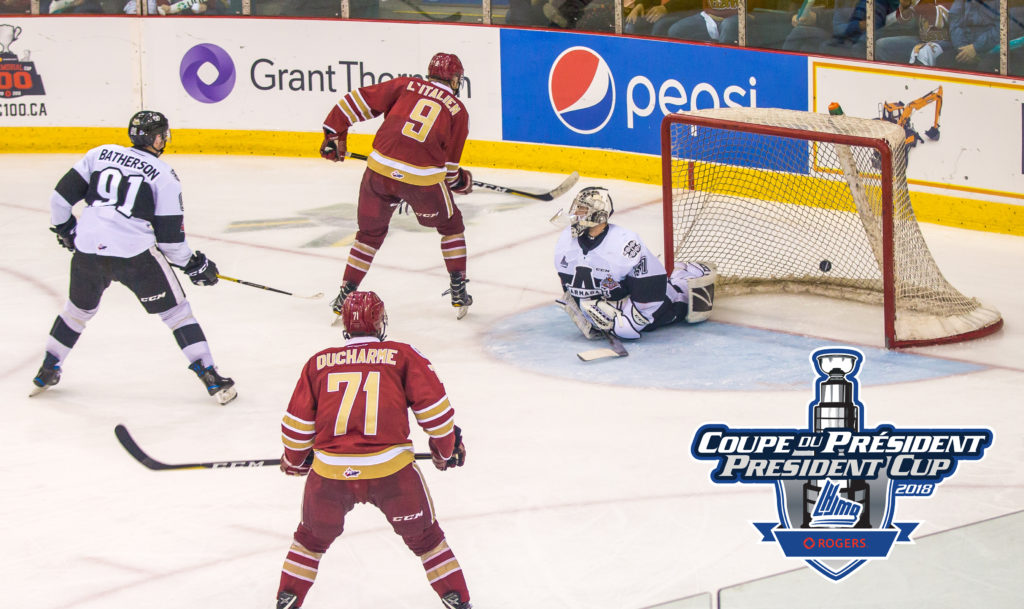 Heading into Friday night’s game of the 2018 Rogers President Cup Final tied at 2-2, the Acadie-Bathurst Titan managed to edge the Blainville-Boisbriand Armada by a 5-3 score to regain the lead in the series.

Both teams will now travel back to Bathurst’s K.C. Irving Regional Centre for Sunday afternoon’s 3 p.m. ET / 4 p.m. AT game 6 matchup, a must-win game for the Armada who try and prevent the Titan from winning the series on home ice.

For Acadie-Bathurst, Samuel L’Italien, Jeffrey Truchon-Viel and Ivan Michal each had one goal and one assist apiece in the win, while teammates Olivier Galipeau and Mitchell Balmas each had a pair of helpers. Ethan Crossmand and defenseman Noah Dobson scored the other Titan goals.

On the Armada side, the home squad was fueled by goals from Alexander Katerinakis, Joël Teasdale and Charles-Antoine Giguère.

Both netminders put together solid efforts in the game, with Emile Samson stringing 28 saves in the loss, and Evan Fitzpatrick getting the best of him with 33 saves of his own.

Teasdale opened the scoring 3:06 into the game by finding the back of the net thanks to a fortunate redirect off the Titan defenseman’s skate on the power play. But the Titan would strike back twice to close off the opening period with a 2-1 lead; first thanks to L’Italien’s third tally of the playoffs at 12:35, and then thanks to Ivan’s first career postseason goal 2:24 later.

Crossman made it a 3-1 lead for Acadie-Bathurst nearly four minutes into the second period following up on a partial breakaway with a beautiful fake and shot that beat Samson over the shoulder. Just 3:51 later, Katerinakis would score on a breakaway of his own to cut the lead back to one.

Dobson’s blast just under three minutes into the final frame gave the Titan a 4-2 lead, but it was once again short-lived celebrations, as Giguère struck right back 66 seconds later to bring some hope back to the Armada side.

The score would stay at 4-3 until the very end of the game, up until when Truchon-Viel added to the Titan lead with an empty net goal with seven seconds remaining.