Final Four Vote Underway for CHL Team of the Century

CHL Team of the Century
CHL
by
CHL/LCH 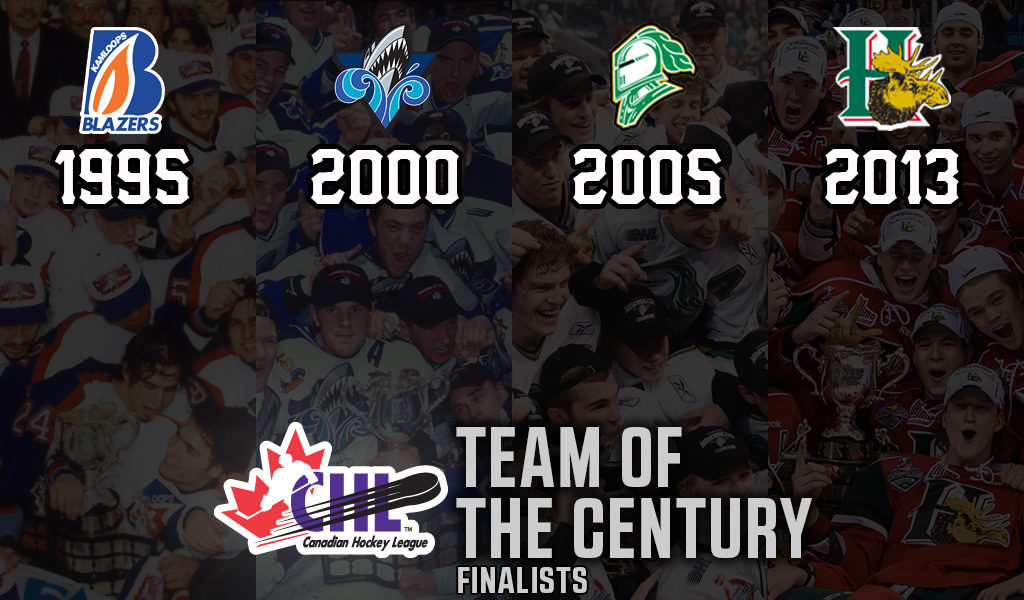 Toronto, ON – In celebration of the 100th edition of the Mastercard Memorial Cup, the Canadian Hockey League has been asking fans to cast their vote for CHL Team of the Century.

After thousands of votes for history’s 99 Memorial Cup champions, a final ballot has been reached consisting of the top representative from each league plus a wildcard team.

The Western Hockey League’s 1995 Kamloops Blazers, the Ontario Hockey League’s 2005 London Knights, and the Quebec Major Junior Hockey League’s 2013 Halifax Mooseheads each led their respective league in votes, while the QMJHL’s 2000 Rimouski Oceanic was the next highest finisher to complete the final four.

The 1995 Kamloops Blazers became the seventh team in history to win back-to-back but first to win an incredible third Memorial Cup title in the span of four years celebrating on home ice with an 8-2 victory over the Detroit Jr. Red Wings.  Coached by Don Hay, the Blazers featured tournament MVP Shane Doan along with stars like Jarome Iginla, and the trio of Darcy Tucker, Tyson Nash, and Ryan Huska who were part of all three Blazers championships.

The 2013 Halifax Mooseheads tied a QMJHL record with 58 regular season wins then captured their first league title with just one playoff loss.  Their first national championship came in Saskatoon powered by the dynamic NHL Draft eligible duo of tournament MVP Nathan MacKinnon and CHL Player of the Year Jonathan Drouin who combined for eight goals and 14 assists in four games.  Coached by Dominique Ducharme, the Mooseheads, backstopped by fellow NHL Draft prospect Zach Fucale, defeated the Portland Winterhawks 6-4 in the final.

The 2000 Rimouski Oceanic were led by Brad Richards who won nearly every award possible that season including QMJHL and CHL Top Scorer, Player of the Year, and later QMJHL playoff and Memorial Cup tournament MVP honours.  Coached by Doris Labonte, the Oceanic won their first national title in the first tournament played in Atlantic Canada going undefeated against the host Halifax Mooseheads, Kootenay Ice, and Barrie Colts who they beat twice including 6-2 in the final.

Through May 15 at 11:59 pm Eastern, fans can help select the CHL Team of the Century among the final four candidates with the winning team to be announced as part of the centennial celebration at the 2018 Mastercard Memorial Cup.

The online voting platform hosted at http://chlteamofthecentury.ca features photos, rosters, and tournament recaps for all 99 Memorial Cup champions.  The voting process permits users to vote up to 10 times per day by logging into an active CHL Fanbase account.  New users can register at http://chlfanbase.ca/.  Every vote cast provides fans the opportunity to win great prizes including a grand prize trip for two to the 2019 Memorial Cup including transportation, accommodations, and tickets to the Semi-Final and Championship Final.

The CHL Team of the Century vote is the latest initiative to commemorate the historic 100th Mastercard Memorial Cup celebration.  Other initiatives this season have included the creation and sale of a Commemorative Coin in partnership with CIBC, a Memorial Cup Trophy Tour that visited 17 CHL communities in eight different provinces from November 18 through March 17, and a Champions Video Series to share stories and highlight moments of glory from some of history’s most memorable victories.

The Memorial Cup has a rich tradition that has shaped the way junior hockey is played in North America.  The trophy was original known as the OHA Memorial Cup and was donated by the Ontario Hockey Association in March, 1919, in remembrance of the many soldiers who paid the supreme sacrifice for Canada in the First Wold War.  In 2010 the Memorial Cup was rededicated to the memory of all fallen Canadian Military Personnel.

The 2018 Mastercard Memorial Cup is proudly supported by Mastercard, title sponsor of this event for 20 straight years.  Associate sponsors include CIBC and Cooper Tires.  All games will be broadcast by Sportsnet and TVA Sports.