Eagles face off with Titan on Irish Jersey Night 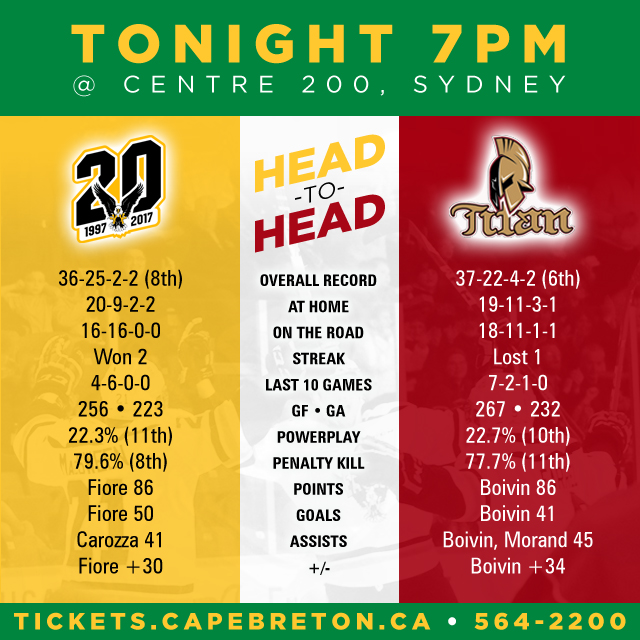 The Cape Breton Screaming Eagles will don green jerseys for a critical game in terms of playoff positioning against the Acadie-Bathurst Titan. Wednesday’s night game is the final home game of the regular season for Cape Breton.

It’s the eleventh time the Eagles have worn the Irish themed uniforms. Following the game the jerseys will be raffled off to winners of a ticket draw, with the proceeds going to the Cape Breton Regional Hospital Foundation’s Cancer Patient Care Fund. Cape Breton also played Bathurst the first time they ever won green, back in 2007.

Heading into the Wednesday night contest Bathurst sits in sixth in the Quebec Major Junior Hockey League, while Cape Breton is in 8th place. The Titan have clinched home ice advantage in round one but cannot climb any higher in the standings. Cape Breton can finish anywhere from 6th to 9th and must win the game against Bathurst in order to pass the Titan in the standings. With a victory the Eagles can clinch home ice for the first round.

It’s the eighth and final meeting of the season between the two long time rivals, but the first meeting in over a month. This season Bathurst has won five of seven contests, including all three in Sydney.

Giovanni Fiore leads the QMJHL with 50 goals, just the second Eagle to ever hit that number and the first player in the league to do so since 2014-15. His linemate Massimo Carozza has been contributing as of late with 17 points in his last 12 games. For the Titan Christophe Boivin has led the way with 86 points in 65 games, while Antoine Morand has chipped in 16 points in his last ten matches.