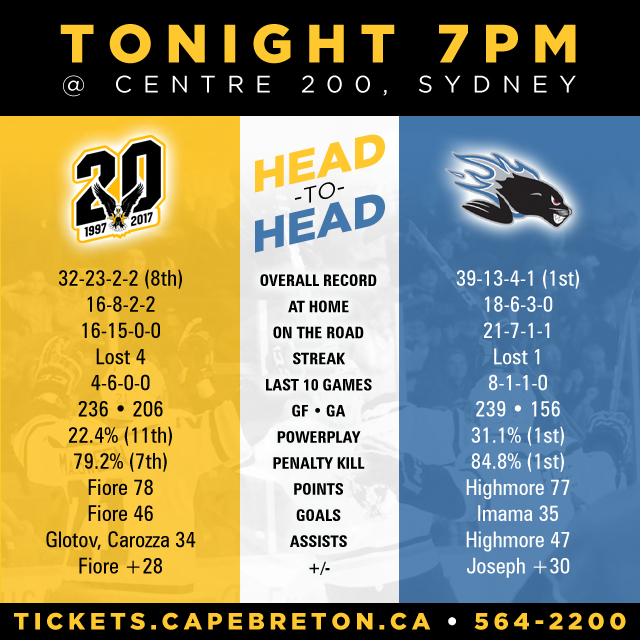 It’s the second game of a four game home stand tonight for the Cape Breton Screaming Eagles as they host the Saint John Sea Dogs. The Eagles are looking to snap a four game losing skid while the Sea Dogs are hoping to rebound from a whacky 8-7 overtime loss at home against Bathurst.  Tonight marks the eighth time the two clubs have faced off this season, with the Sea Dogs winning five of seven including all three at Centre 200.

Cape Breton has otherwise played very well at home, at a 16-8-4 clip with an overall record of 32-23-4 which places the Eagles in a tie for 7th with Chicoutimi (although Chicoutimi has two games in hand). Saint John is holding on to first place in the league, five points ahead of their closest rival, with a 39-13-5 record. The Sea Dogs are 21-7-2 on the road and have the league’s top power play (31.1%) and top penalty kill (84.8%).

Giovanni Fiore leads the Screaming Eagles in scoring with 78 points in 52 games, and league’s leading goal scorer with 46. With his next goal, Fiore will tie Ryan Walsh for the third most goals by an Eagle in a single season. Olivier LeBlanc, who returned to the lineup after a three week absence last night, is tenth among defenseman for points in the league.

Saint John has a potent attack led by World Junior stars Mathieu Joseph and Julien Gauthier. Joseph has been the pinnacle of consistency for the Sea Dogs this year, notching points in 40 of his 45 games this season. Thomas Chabot, another Team Canada player, has 18 points in his last 12 games on the blueline.

Puck drop for this evening’s game is at 7 PM.