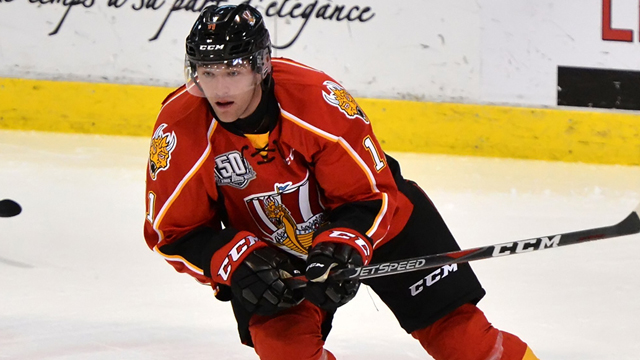 Toronto, ON – The Canadian Hockey League today announced that forward Ethan Crossman of the Baie-Comeau Drakkar is the CHL Player of the Week for the regular season week ending January 27 with seven points in three games including five goals and two assists with a plus-minus rating of plus-4.

Crossman recorded a trio of multi-point performances last week leading the Drakkar to three road wins to extend their franchise-best winning-streak to 13 and lifting them into second place in the QMJHL’s overall standings with a 36-9-2-1 record.  His week began on Friday night scoring once with an assist earning first star honours in a 5-3 victory over the Saint John Sea Dogs.  On Saturday night the 2018 Memorial Cup champion returned to Acadie-Bathurst to face his former team and delivered triumphantly with his first career hat-trick and first star honours for the second straight night in the 8-0 win against the Titan.  Sunday brought another homecoming of sorts for Crossman in Moncton scoring a goal and an assist in the 4-3 win over the Wildcats who selected him back in the 2015 QMJHL Entry Draft.  This marks the third time the Drakkar have been recognized for the award this season as top scorer Ivan Chekhovich won twice during the first half.

A 19-year-old from Sackville, NB, Crossman is playing in his fourth career season and has played in just 14 games with the Drakkar since being acquired from the Titan in December.  So far he’s produced 13 points in 14 games with his new club bringing his season total to 20 points in 32 games.  During last year’s championship playoff run Crossman scored 10 goals and contributed six assists for 16 points in 20 games.

Also considered for the award this week was Columbus Blue Jackets prospect Liam Foudy of the London Knights with eight points in three games including four goals and four assists, and Pittsburgh Penguins prospect Justin Almeida of the Moose Jaw Warriors who was nominated for the second straight week scoring four goals and three assists for seven points in three games.