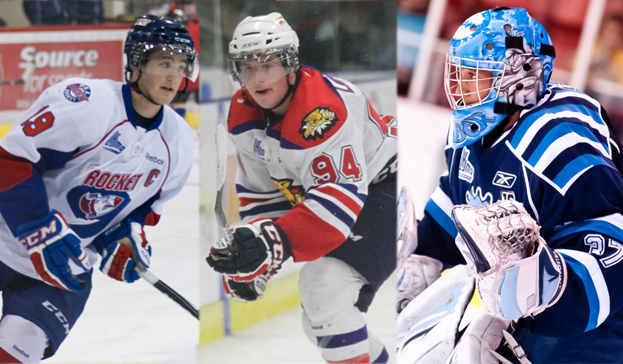 Josh Currie, Christophe Lalonde and Chistopher Gibson were named today the TELUS three stars of the week for the period extending rom December 10 to 16.

The leading QMJHL scorer and PEI Rocket centreman Josh Currie is awarded the first star of the week after collecting 9 points, including 6 assists, and a +/- of +10. Thursday, in a 3-1 loss versus the Halifax Mooseheads, he was the only Rocket to score during the penalty kill. He was named the 3rd star of the game despite his team’s loss. Friday, in a 5-2 win against the Cape Breton Screaming Eagles, he registered 2 assists and a +/- of +4. Sunday, it was an evening of celebration at the Charlottetown Civic Centre with a 6-3 win against the Saint John Sea Dogs. Currie had a terrific performance of 2 goals and 4 assists for a total of 6 points. He scored another shorthanded goal that allowed him to tie the team record of 7 in one season (Michaël Lambert | 2003-04) on top of being named the 2nd star of the game. It’s worth noting that his teammate, Ben Duffy, scored his 122nd goal to become the franchise leader in goals, surpassing David Laliberté’s record (2002-2007).

The second star of the week is handed out to Christophe Lalonde of the Moncton Wildcats. In a 5-3 win on Tuesday against the Acadie-Bathurst Titan, he scored his 6th and 7th goals of the season and was named the 2nd star of the game. Friday, in a 4-3 overtime loss against the Saint John Sea Dogs, he collected an assist and 7 shots on goal. Saturday, during a game involving the 2 best teams of the TELUS Maritimes Division, Moncton and Halifax, he was named the 2nd star of the game. He scored 4 goals during the game, which allowed him to tie the team record held by 6 other Wildcats players.

Finally, the third star of the week belongs to Christopher Gibson, the Chicoutimi Saguenéens goaltender. Gibson played in 3 games this week, including 2 on the road, in situations where he had to keep his team in the game. Of the 5 goals he allowed, only 2 were at even strength. He completes the week with a goals-against-average of 1.63 and a save percentage of .940 to help the Saguenéens register 3 points in the standings in the TELUS East Division. Tuesday, in a 3-1 win against the Shawinigan Cataractes, he made 20 stops and was named the 3rd star of the game. He lost his shutout in the final minute of the game to JC Campagna. Friday, the Rimouski Océanic had the advantage over the Saguenéens with 30 shots against 18. Gibson made a total of 28 saves and was selected the 3rd star of the game. Thanks to the tenacity of Gibson on Sunday, he guided his team to the shootout despite the Remparts outshooting the Saguenéens 33-22. 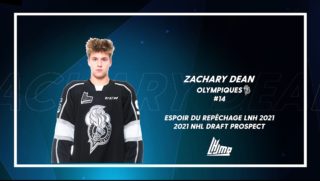