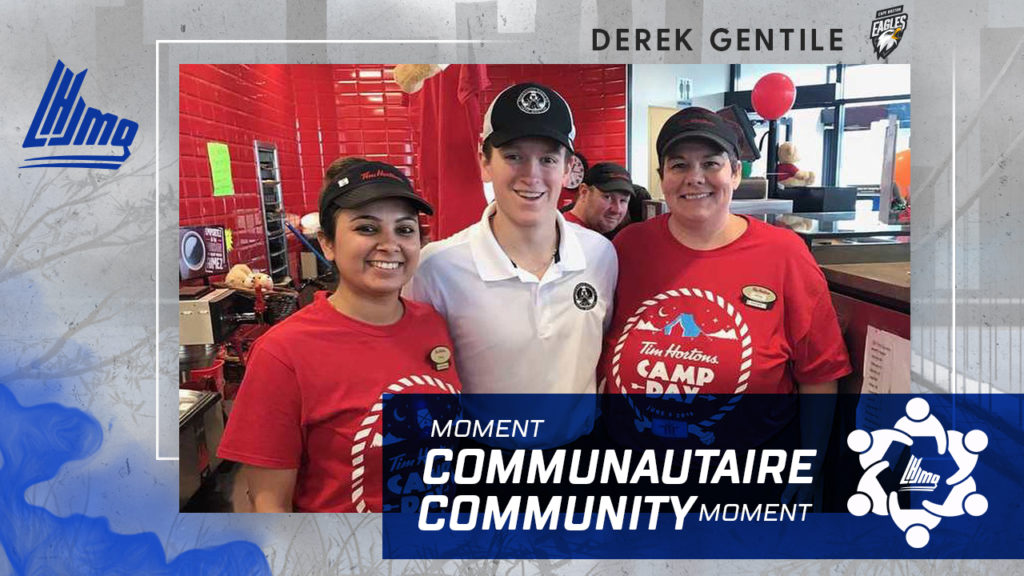 By suiting up for the Cape Breton Eagles, Derek Gentile is one of the rare players who can brag about playing for their hometown’s QMJHL franchise. This is a big reason why he is also the first one to answer the call when his team is looking for ambassadors in the community.

Earlier this year, he didn’t hesitate to put his hockey stick aside in order to spend the day working in a local Tim Hortons restaurant. The goal of this special day? To raise funds in order for less fortunate children in the Sydney, NS area to be able to attend summer camps.

“I worked at the cash for a while”, he remembers. “And then I switched over to the drive through. I also took orders from clients… all while trying not to mess everything up!”, he adds with a laugh.

The former fourth round pick of the Quebec Remparts (70th overall in 2015) says he loved the experience and quickly realized that it is a very demanding job that these people work at on a daily basis.

“I didn’t really know what to expect, but after 45 minutes, I was totally exhausted. It was really something different for me”, explains Gentile.

“The hardest thing was trying not to mess up the people’s money. If someone gives you a 20$ bill, you want to give him the correct change. Everything goes really fast and the last thing you want is to slow down the whole process and have a big lineup because you’re not fast enough.”

The 20-year-old centreman says that what he enjoyed the most was the bond he quickly created with his coworkers.

“The best part is the contact with the people. Everybody was fantastic and very patient with me. My coworkers helped me a lot. I also think they really enjoyed see me constantly mess up things!”, he adds with a smile.

“I did this in the part of town I grew up in. I saw people I hadn’t seen in many years. They were really surprised to see me there!” 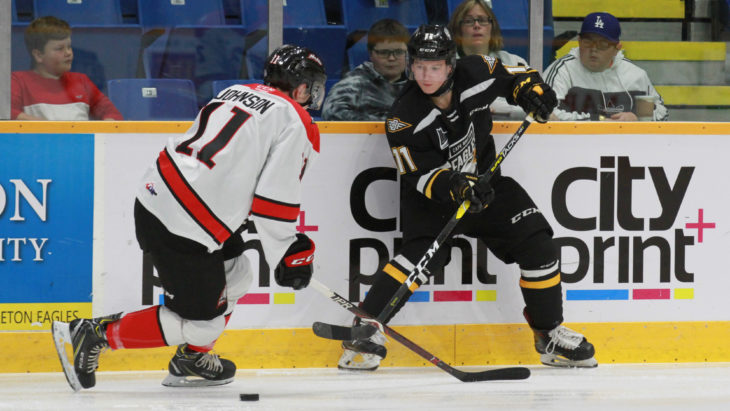 Gentile says he’s very proud to do his part in inspiring the kids in the community and doesn’t underestimate the influence he can have on them.

“It’s a great satisfaction to know that their lives will be just a little bit better because of you. It’s a great feeling. I enjoy meeting fans from all ages, but it’s very important to me to take time to meet the kids, because I know it means a lot to them. I remember growing up and watching all those players who were my idols. I wanted to be like them.”

Gentile has a lot of fond memories of meeting Screaming Eagles players after their games or practices, but he remembers one meet and greet that he enjoyed more than others.

“Maybe I shouldn’t say this because it’ll probably go to his head, but my [current Eagles assistant] coach Chris Cullingan was one of my idols. He’s also from Sydney and he was very involved in the community. He was the captain, the leader. I’m just trying to follow in his footsteps and make people proud”, explains the veteran.

“I also did an event at a local Canadian Tire earlier this season. And I went to meet kids in different schools to talk to them about the importance of a good education last year”, adds Gentile.

“We are very lucky to have a voice and to be role models for so many kids. We have a very hectic schedule with hockey, but we always try to find some time to give back to the community. And have a positive influence on the kids.”

Derek Gentile might be in the final season of his junior hockey career, nut he’s doing all he can to have an impact on his community for generations to come.