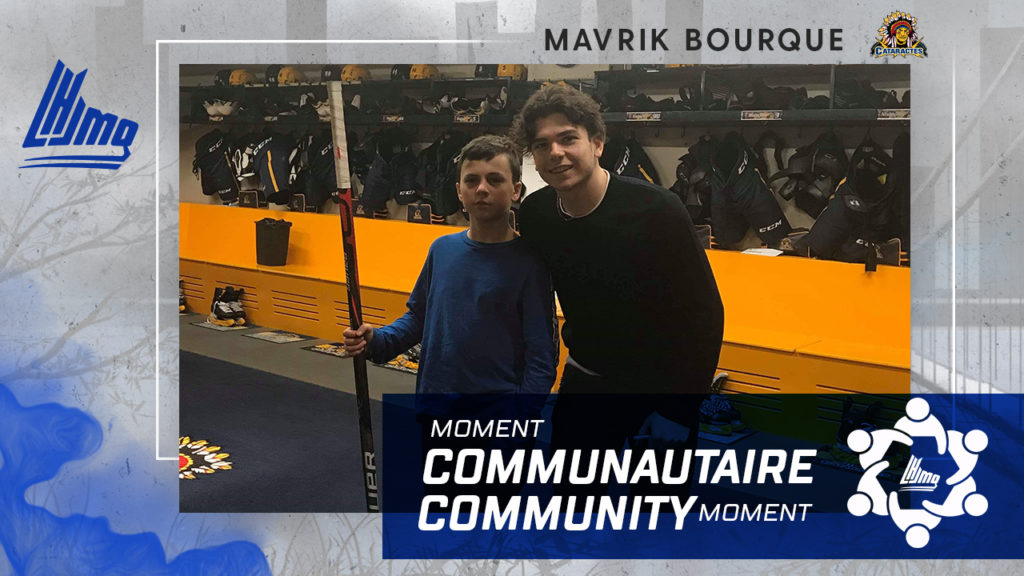 Mavrik Bourque is a star on the ice, but also in his everyday life.

The Shawinigan Cataractes forward does a lot more than filling the other team’s net. He also lends his name to a cause very dear to his heart.

Cancer – a disease he knows all too well. His uncle, Gaétan Boisvert, died from it in 2019. A death that took a big toll on Bourque.

So, along with two of his teammates (the others being William Veillette and Antoine Coulombe), the Cataractes forward recorded a short video to boost Leucan’s fundraising efforts. On top of that, Shawinigan dedicated its game on February 15th to that same organism that helps young victims fight this terrible disease.

“Us three players got involved with Leucan and they paired us with a kid who is either fighting cancer, or has one of his siblingsbattling it”, explains Bourque. “We each did a video with our young friend. In my case, it was Anthony Noel, a 12-year-old boy who’s on his way to recovery.”

Along the way, Bourque kind of became a big brother for Noel.

“We’re like their idols. And when you have cancer, it can be hard on morale. So we try our best to encourage them, to keep their heads up high and keep fighting. For us, it’s one way of giving back to the community”, says the Plessisville native.

For Bourque, it’s also a nice way to pay tribute to his uncle, who passed away in the fall of 2019.

“He always came to my games. He was a real Cataractes fan. He was very close to me and to my family. It’s always hard to lose a member of your family to a disease like that”, adds the 18-year-old centerman.

“Cancer touches everybody, not only those battling it, but also all the people around them”, says Bourque. “It is a very important cause for me. I was talking with William (Veillette) recently about maybe doing more stuff with Leucan. If we can put the smiles back on some kids’ faces, we will gladly do it.”

You don’t have to twist Mavrik Bourque’s arm when it comes to helping with children or to take care of Anthony Noel.

“It’s a question of being human. Every kid should have the chance to live a normal life. But clearly not everybody has a chance at happiness”, explains the Cataractes forward. “For us, helping kids is a question of values. We try to be good role models for them. Our three young friends look at us with stars in their eyes. We have to show them our humanity.”

Bourque says he realizes how lucky he is to be able to follow his passion and play hockey.

“I am very aware of that. I don’t like to see sick kids. When I meet them, I try to stay strong and support them”, explains the star player. “The first time I met the three kids, I went back to my billet family and I could not take my mind off of them all night. It has to be really difficult for them. You try to put yourself in their shoes.”

Even if he’s currently recovering from a broken arm himself, Bourque doesn’t want anyone feeling sorry for him.

“We often don’t realize the chance we have to be playing hockey. I’ll be back to help my team one day. It’s only a broken bone. I keep on living and doing my things”, he says. “But our young friends are going through tougher times. I know I will heal, but these kids never know if they will ever completely recover. I consider myself very lucky.”

It’s no longer a secret, Mavrik Bourque is as generous of his time with the kids than he is with the puck and his teammates. 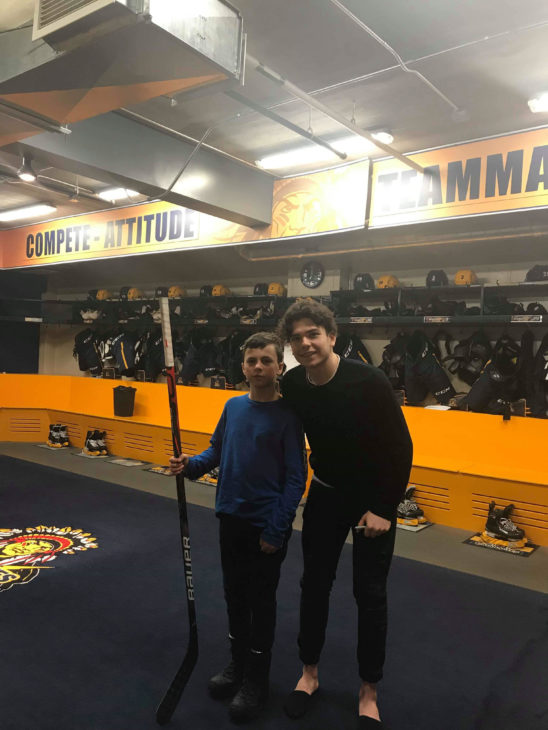