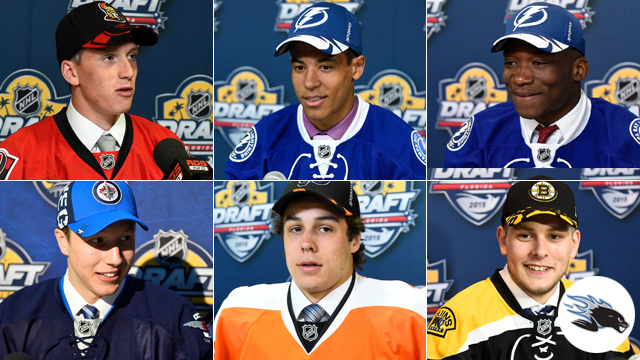 A steady producer of NHL Draft talent in recent years, the Saint John Sea Dogs are looking to turn the corner in 2016-17, setting their sights on a second Mastercard Memorial Cup title.

After claiming a Maritimes Division title with 42 wins last season, the Sea Dogs eliminated the Acadie-Bathurst Titan in five games before a thrilling seven game series victory over the Cape Breton Screaming Eagles in the second round.

They’d meet their demise at the hands of the Shawinigan Cataractes in the QMJHL Semi-Finals, but the Sea Dogs return a year older under new management in 2016-17 and begin the season ranked second on the pre-season edition of the CHL Top 10 Rankings.

The Sea Dogs enter the season eyeing their best shot at a President Cup title since they won in back-to-back seasons in 2011 and 2012, but they aren’t letting the pressure get to them.

“We know we’ve got a good team, and we’re a confident group,” Chicago Blackhawks prospect Nathan Noel told Robin Short of the The St. John Telegram. “We just want to have some fun with it.”

“We can’t worry about any expectations that are out there. We’re not letting any pressure get to us.”

Noel is one of 11 Sea Dogs attending NHL training camps this fall, leaving the team back in Saint John considerably shorthanded. The Sea Dogs dropped a pair of road games to open the season last weekend, falling 6-2 in Charlottetown on Friday before being edged 4-3 in Halifax on Saturday.

Noel, who was drafted by Chicago as a 19-year-old this past summer, is one of several talented names in Saint John’s forward ranks, being joined by overager Matthew Highmore, Tampa Bay Lightning prospects Mathieu Joseph and Bokondji Imama, Philadelphia Flyers draftee Samuel Dove-McFalls and Carolina Hurricanes pick Spencer Smallman.

One shouldn’t overlook 16-year-old phenom Joe Veleno, who as an underage player in the QMJHL last season, put up 13 goals, 30 assists and 43 points over 62 games.

Veleno, who joins such prominent names as Aaron Ekblad (Barrie Colts/Florida Panthers), John Tavares (Oshawa Generals/New York Islanders) and Connor McDavid (Erie Otters/Edmonton Oilers) in receiving exceptional status from Hockey Canada, isn’t getting too far ahead of himself, but looks up to his predecessors.

“Tavares, McDavid … they’re incredible players,” Veleno told NHL.com’s Aaron Vickers. “They’re exceptional. They’re in another class right now. I’m still working. I’m not there. I have a lot of work to do. They’re two phenomenal players. They’ve proven it in juniors and every league they’ve played in. I’m trying to model my game after those guys and trying to do the things they did. I just have to keep working hard, and hopefully I can become like them one day.”

Head coach Danny Flynn oversees a high-flying offence, but the blue line might be more intriguing still, with first round NHL picks Thomas Chabot (Ottawa) and Jakub Zboril (Boston) carrying the load should they both return from pro camps. Former first overall QMJHL Draft selection Luke Green, a third round pick of the Winnipeg Jets in June, adds another layer of stability.

“All six of our starting defencemen last season are in NHL camps,” Flynn told Neil Hodge of the Charlottetown Guardian. “That’s something we’re proud of. We had a deep playoff run with a younger team last season. Our guys gained a lot of experience and I think we learned a lot. I think that experience is going to pay dividends for us.”

In goal, Alex Bishop steps into the spotlight after spending the past two seasons in a backup role. Now 19, Bishop will be pushed by rookie netminder and former 9th overall QMJHL Draft selection Alex D’Orio who comes off a solid Midget season. D’Orio also represented Canada in the World Under-17 Hockey Challenge last December.

The Sea Dogs will face resistance from the Charlottetown Islanders, who despite losing star forward Daniel Sprong to injury, boast other scoring depth from Filip Chlapik (Ottawa) and CHL Player of the Week Kameron Kielly. Vancouver Canucks prospect Guillaume Brisebois provides the Islanders with one of the league’s best defencemen.

The Acadie-Bathurst Titan are on the upswing as well, boasting offensive talent in Antoine Morand and Vladimir Kuznetsov in front of promising netminder Reilly Pickard.

“We’ll probably have more experience than a lot of teams in this division,” Flynn added, “but this division is full of good coaches and solid teams so we’re expecting it to be really competitive.

Smallman and Dove-McFalls are making their way back to Saint John to return to the lineup this weekend as the Sea Dogs look to get back to their winning ways in their home opener against Cape Breton on Friday.