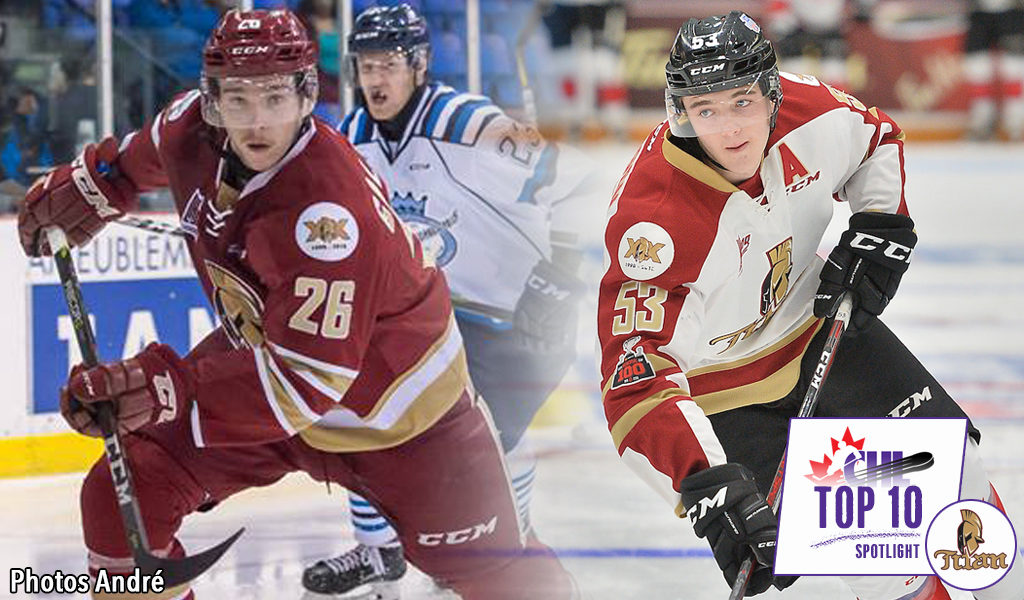 Built to win now, the QMJHL’s fourth place Acadie-Bathurst Titan are keeping their foot on the gas straight into the 2018 QMJHL Playoffs.

Fourth-year head coach Mario Pouliot’s club won its first playoff series since 2008 last spring and looks to build off that success with a veteran-led group that has won five of its last six contests.

More so than other top contenders, a great deal of the Titan’s offence originates on the back end where QMJHL Defenceman of the Year candidate Olivier Galipeau and top 2018 NHL Draft prospect Noah Dobson help power the league’s second ranked power play.

A President Cup champion with the Val-d’Or Foreurs as a rookie back in 2014, Galipeau is the elder statesman on the Acadie-Bathurst blue line, leading QMJHL defencemen with 23 goals and 63 points with a plus-28 rating over 56 games.

The eighth ranked North American skater on NHL Central Scoutings Midterm Rankings, Dobson is second in league scoring by defencemen with 57 points (13-44–57). The 18-year-old native of Summerside, PE, was Bathurst’s first round (6th overall) pick of the 2016 QMJHL Draft.

“It’s pretty neat talking to NHL teams,” he told CBC News’ Kevin Yarr. “Obviously, as a player, your dream is to get drafted.”

Dobson represented Team Orr at the 2018 Sherwin-Williams CHL/NHL Top Prospects Game in Guelph, Ont. where he excelled in the event’s on-ice skills testing. A recent recipient of Sport PEI’s Junior Male Athlete of the Year award, Dobson isn’t getting too focused on draft day just yet.

“Come June all of these things are out of your control, so you just need to control your play on the ice and keep focus on that,” he noted.

The Bathurst blue line also features an experienced name in overager Adam Holwell (8-35–43) who is typically paired alongside Dobson while 18-year-old Keenan MacIsaac (3-24–27) has also seen his share of ice this season.

Up front, a deep forward group is led by overage captain Jeffrey Truchon-Viel (30-21–51) who this past weekend secured his third consecutive 30-goal season. Anaheim Ducks prospect Antoine Morand (19-40–59) continues to serve as one of the league’s premier playmakers while mid-season additions Mitchell Balmas (37-23–60) and German Rubtsov (12-23–35) have both played at a point-per-game pace since joining the Titan. Two-way centreman Samuel L’Italien (18-24–42) has developed into one of the league’s most reliable faceoff men.

It’s worth noting that the 34-14-7-2 Titan could be higher in the standings if not for a 2-9 record beyond regulation this season. They remain one of the best home ice teams in the QMJHL with a 21-3-4-1 mark at the K.C. Irving Centre.

After returning with five of a possible six points on a road trip with stops in Moncton and Cape Breton last weekend, the Titan return home for home dates against Gatineau and Drummondville on Thursday and Friday. Nine of their remaining 11 games on the schedule come against Maritimes Division opponents.