CHL Team of the Week
CHL 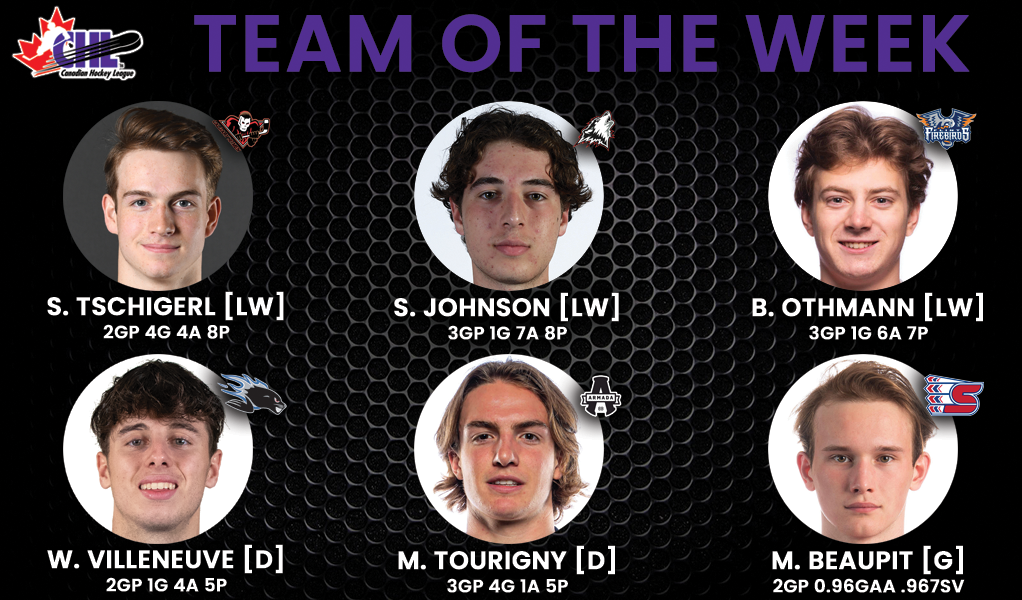 The Canadian Hockey League announced today the eighth edition of the CHL Team of the Week for the 2021-22 regular season based on individual performances from November 22-28.

Leading the forward ranks is Calgary Hitmen left-wing Sean Tschigerl who tallied eight points counting four goals and four assists coming in a pair of contests. Tschigerl’s top performance of the week came Saturday against Saskatoon when he scored his second career hat-trick and added one assist en route to a 7-0 victory in which he was recognized as the game’s first star. For his efforts, the 18-year-old native of Whitecourt, Alta., was later honoured as the WHL Player of the Week. A 2021 fifth-round selection of the Anaheim Ducks, Tschigerl has recorded 23 points counting 12 goals and 11 assists through 18 contests.

Also up front is Rouyn-Noranda Huskies veteran left-wing Samuel Johnson who notched eight points counting one goal and seven assists through a trio of appearances. Facing Cape Breton on Sunday, the product of Carleton, Que., dominated with a five-point performance – all coming as assists – to power the Huskies to a 6-4 road win where he was named first star. Johnson was also later honoured as the QMJHL Player of the Week. In all, Johnson has collected six goals and 16 assists for 22 points in 17 games.

Rounding out the forward group is New York Rangers first-round pick Brennan Othmann of the Flint Firebirds who notched one goal and six assists for seven points over three games. Facing Sarnia on Saturday, the 2003-born left-wing found the back of the net and added two assists to mark his second consecutive three-point night, earning first-star recognition in the 4-3 final. Othmann was later named the OHL Player of the Week. Through 17 appearances, the Pickering, Ont., product leads the Firebirds in scoring with 27 points counting 14 goals and 13 assists.

On the blue line, Toronto Maple Leafs prospect William Villeneuve of the Saint John Sea Dogs impressed with five points in two appearances, highlighted by Thursday’s 9-2 thriller versus Rouyn-Noranda in which he put up one goal and two assists. A modern, puck-moving defenceman, the 19-year-old product of Sherbrooke, Que., has collected two goals and 15 assists for 17 points in 20 showings.

Also on the back end is Blainville-Boisbriand Armada veteran rearguard Miguel Tourigny who registered four goals and one assist for five points in three outings. Currently riding a 10-game point streak, that stretch includes Friday’s 7-1 road win versus Cape Breton in which Tourigny scored twice – including the eventual game winner – and added an assist before later being named the first star. A native of Victoriaville, Que., Tourigny currently leads the Armada with 32 points counting 16 goals and 16 assists through 22 appearances.

Between the pipes, Spokane Chiefs netminder Mason Beaupit came away with a 1-0-0-1 record across two appearances in which he combined for 59 saves in a home-and-home series against Kelowna. In all, Beaupit’s weekly performance was underscored Friday when the 2022 NHL Draft hopeful turned aside 36 shots, matching his season high. For his efforts, Beaupit was later named the WHL Goaltender of the Week. An 18-year-old native of Surrey, B.C., Beaupit has made 12 appearances this season, coming away with three victories alongside a .907 save percentage and 2.98 goals-against average.