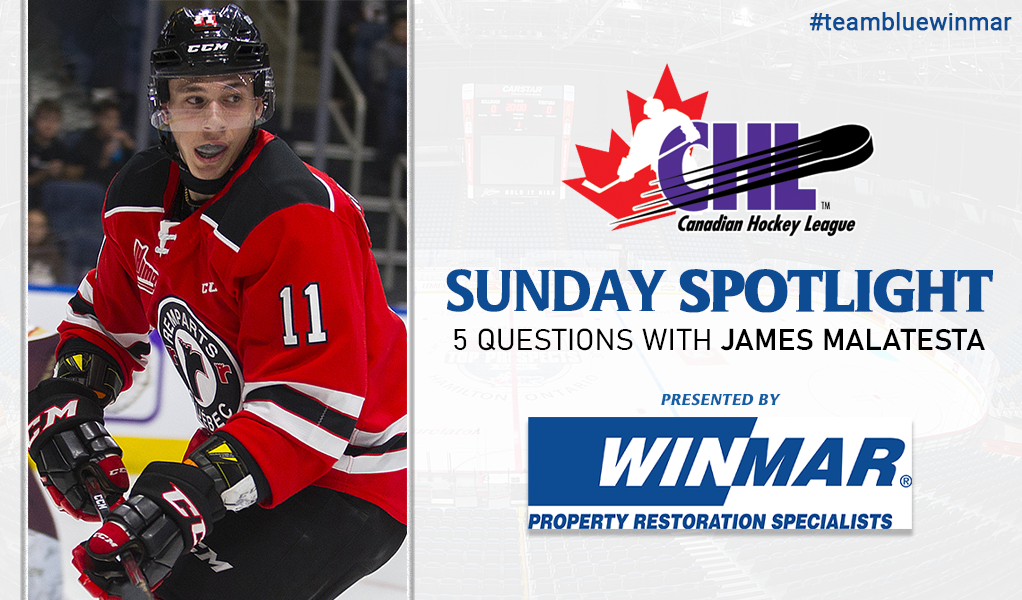 The 2021 NHL Draft class offers added intrigue for fans of the Quebec Remparts.

That’s because sophomore forward James Malatesta is a strong candidate to hear his name called early on draft day and become just the second Remparts product to be picked in the past five years.

Among 113 draft-eligible talents from across the CHL to be highlighted as Players to Watch by NHL Central Scouting, the recognition of Malatesta comes following a successful rookie campaign in which the native of Kirkland, Que., finished second in team scoring with 45 points, counting 23 goals that also sat second among freshmen league-wide.

Hoping to carry that offensive excellence into the new campaign, Malatesta shared his objectives for the 2020-21 season and more in the latest edition of the CHL Sunday Spotlight presented by WINMAR:

How do you evaluate your rookie season and what are your goals for this season?

I found that last year I had a very good season. I produced and this year I want to do the same thing. I want to go out there and try to do better than I did last season.

How are you preparing for the NHL Draft and what it’s like to share the experience with several draft-eligible teammates?

I believe that in every practice and in every game we go out there and we push each other. In practice, we try to take good habits and put it into games. I just want to work very hard and give myself a good chance of getting drafted this year.

What areas of your game are you most focused on further developing and how are you working to improve?

Part of my game I want to further develop has to be my defensive zone (coverage). Last year, that was my goal and I have already seen a big improvement doing video with the coaches. This year, I want to improve it even more and become an all-around player.

What is it like to play under a hockey legend like Patrick Roy and what have you learned most from him?

It’s amazing to play under a legend like Patrick Roy. He has been in (the NHL) so he knows what it takes. He knows what you have to do and what not to do, so you know he passes that on to his players, and just to be professional. When you show up to the rink, be professional, show up on time, and be ready for the task at hand.

Which NHL player do you model your game after and what aspects of his game do you see in your own?

I probably model my game after a player like Brad Marchand. In between the whistles, he works very hard, he is in the corners, he shoots the puck, he knows where his teammates are going to be, and he knows how to find open ice so his teammates can find him.