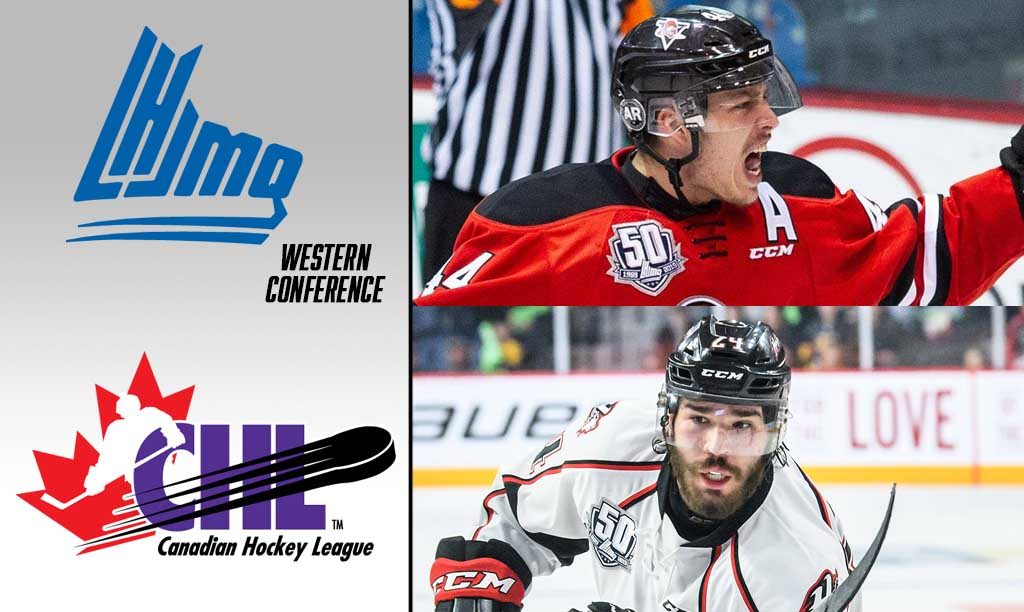 With the 2018-19 campaign in the books, the Canadian Hockey League is highlighting those players who have graduated to the pro ranks or who will pursue academics next season. The six-day series continues with the QMJHL’s Western Conference.

The Drummondville Voltigeurs will have a different look next season after producing six graduates in 2018-19, a group led by 20-year-old left-wing Maxime Comtois. A second-round selection by the Anaheim Ducks in 2017, Comtois had a 10-game trial with the big club to kick off the season, picking up seven points before returning to the Voltigeurs. Back in the ‘Q’, Comtois was a steady offensive threat for Drummondville, finishing the year with 48 points in only 25 appearances. At season’s end, he was assigned to the San Diego Gulls, the Ducks’ top minor-league club, where he picked up one point in four games before adding another five goals and four assists in 12 playoff contests.

Heading north, the Shawinigan Cataractes will see the departure of four players, including 20-year-old right-wing Jan Drozg, who is expected to graduate to the pro ranks next season after being selected in the fifth round of the 2017 NHL Draft by the Pittsburgh Penguins. The Slovenian-born forward finished with a career-best 62 points in 2018-19 to lead the Cataractes in scoring, then got a taste of the pro ranks as he appeared in a pair of games with Pittsburgh’s top minor-league affiliate, the Wilkes-Barre/Scranton Penguins.

A trio of overagers in forwards Jeremy Manseau and Vincent Senez, plus defenceman Colin Paradis, round out the Cataractes’ other graduates.

From the Sherbrooke Phoenix, three players are expected to move on, with defenceman Ryan DaSilva leading the way. DaSilva was a top performer for the Phoenix in 2018-19, finishing fifth in team scoring and first among rearguards with 44 points in 66 games. In all, DaSilva wraps up his time in the QMJHL with 78 points in 174 career contests. The 21-year-old will continue his hockey career next season with the University of Guelph of U SPORTS.

Excited to announcement my commitment to attend the university of Guelph in the fall, Go Gryphs! @guelph_gryphons pic.twitter.com/kZPaXNUF6u

Other overagers from the Phoenix include right-wing Bobby Dow and defenceman Michael Kemp (University of Moncton).

Rounding out the Central Division, the Victoriaville Tigres will see the departure of three players, headlined by 1998-born captain Simon Lafrance. After notching a career-best 55 points in 2018-19 to finish second in team scoring, Lafrance concludes his three years of junior with 155 points in 196 career contests. The St-Eustache, Que., native will continue his hockey career next season with the University of Quebec at Trois-Rivieres of U SPORTS.

Also moving on from the Tigres is left-wing Mathieu Sevigny (France) as well as defenceman Dominic Cormier (University of Ottawa).

Beginning in the West Division, the Blainville-Boisbriand Armada will have at least three roles to fill next season with a trio of overagers set to move on, a group that includes 21-year-old right-wing Alexander Katerinakis, who led the team with a career-best 50 points. After spending all five seasons of his junior career with the Armada, in which he collected 151 points in 261 career appearances, the Quebec-native then appeared in a four-game set with the ECHL’s Fort Wayne Komets before electing to continue his hockey path with Concordia University of U SPORTS.

The Armada will also see the departure of left-wing Tyler Hylland (Concordia University) and goaltender Brendan Cregan (University of Guelph).

Two graduates came from the Gatineau Olympiques in 2018-19, including 21-year-old centre Giordano Finoro, who put up a career-best 51 points in his final junior season to lead his squad in scoring. In all, that performance brought his career total to 90 points in 125 games in the QMJHL (Finoro previously played in 110 games with the OHL’s Barrie Colts, notching 31 points). Finoro will join the University of Guelph of U SPORTS next season to continue his hockey career.

Congrats @TeasJo!@CanadiensMTL prospect was named the Stafford Smythe Memorial Trophy winner as MVP of the 2019 #MemorialCup Presented by @KiaCanada with 4️⃣🚨 & 1️⃣🍎 in five games for @QMJHL’s @HuskiesRn.

The 2018-19 campaign concluded with the Rouyn-Noranda Huskies hoisting the Memorial Cup for the first time in franchise history, a season in which the club also tied a CHL record with 25 consecutive victories. En route to the championship, the Huskies received an incredible performance from 20-year-old left-wing Joel Teasdale, who after joining the team in early January put up 24 goals and 18 assists in 29 appearances to bring his regular-season total to 80 points in 66 games. In the postseason, Teasdale led the QMJHL with 34 points, then added another five points in as many games at the 2019 Memorial Cup presented by Kia to claim the Stafford Smythe Memorial Trophy as the tournament’s MVP. Signed by the Montreal Canadiens as an undrafted free agent last September, Teasdale is expected to make the jump to the pro ranks in 2019-20.

Rounding out the West Division, the Val-d’Or Foreurs will see the departure of three overagers, headlined by 21-year-old centre Julien Tessier, who led the club in scoring in 2018-19 with 64 points in 61 games. In all, the Quebec-native concludes his five seasons in junior with 153 points in 230 career contests.

Right-wing Yan Dion and defenceman Felix Boivin will also graduate from the Foreurs.

Next up: OHL’s Western Conference