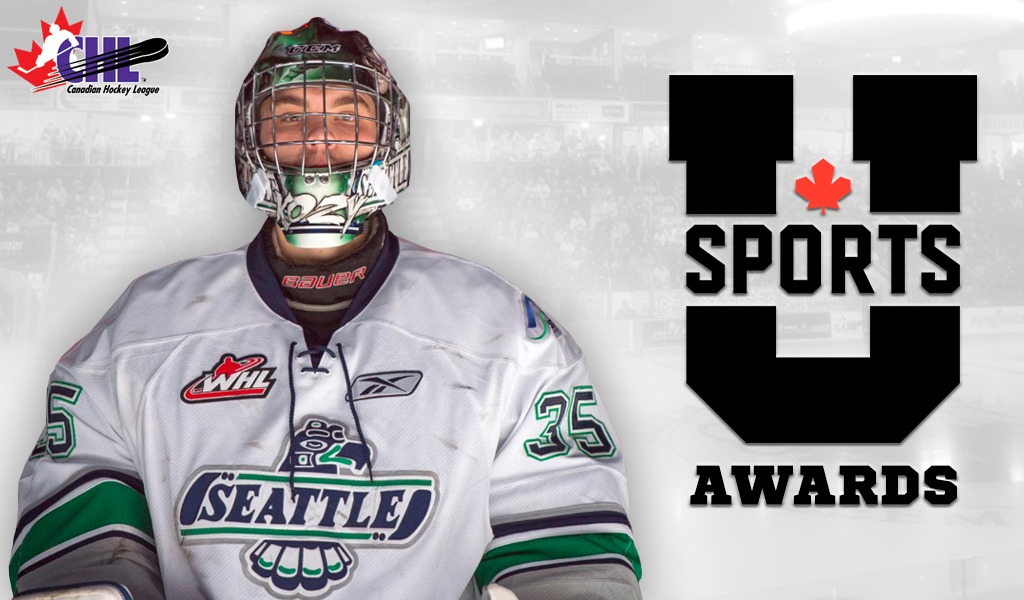 Five graduates of the Canadian Hockey League have been nationally recognized as 2019-20 U SPORTS award winners.

Saskatchewan Huskies goaltender Taran Kozun became the first player in U SPORTS history to claim Player of the Year and Goaltender of the Year recognition in the same season following an impressive campaign in which he led all Canada West netminders in wins (17), save percentage (.931), goals-against average (1.87), and shutouts (5). Kozun, who won Goaltender of the Year honours for the second consecutive season, now aims to guide the Huskies to a national championship at the 2020 U SPORTS University Cup beginning Thursday. The Nipawin, Sask., native spent three full seasons in the WHL from 2013-15 in suiting up for the Kamloops Blazers and Seattle Thunderbirds.

Cape Breton Eagles alumnus Mitchell Balmas impressed in his first season with the Saint Mary’s Huskies, registering 43 points counting 17 goals and 26 assists to lead his team in scoring and finish second overall across Atlantic University Sport to claim U SPORTS Rookie of the Year honours. The performance also sees him earn a spot on the U SPORTS Second Team All-Canadian in addition to the U SPORTS All-Rookie Team. Balmas now looks to continue his success as Saint Mary’s is one of eight clubs competing at the 2020 U SPORTS University Cup. The 21-year-old spent five seasons in the QMJHL from 2014-19, dressing for the Charlottetown Islanders, Gatineau Olympiques, Acadie-Bathurst Titan, and Eagles.

Nikolas Brouillard of McGill University is the U SPORTS Defenceman of the Year after tallying seven goals and 16 assists for 23 points across 28 appearances to finish tied for second in team scoring and earn a spot on the U SPORTS First Team All-Canadian. A native of St-Hilaire, Que., Brouillard spent five seasons in the QMJHL from 2011-16 in suiting up for the Drummondville Voltigeurs, Quebec Remparts, and Rouyn-Noranda Huskies.

Skating in his fifth season with the Saskatchewan Huskies, forward Levi Cable put together a successful campaign in which he finished just shy of a point-per-game pace in producing 10 goals and 14 assists through 28 contests. It also marked the second consecutive season in which Cable was not whistled for a penalty. In all, the 25-year-old wraps up his five-year academic career with only 18 penalty minutes in 140 total games. For his efforts, Cable was presented with the R.W. Pugh Fair Play Award, presented annually to Most Sportsmanlike Player from U SPORTS. A native of Hudson Bay, Sask., Cable spent his entire WHL career with the Kootenay ICE, spanning four full seasons from 2011-15.

Rounding out the major award winners, Acadia Axemen defenceman Liam Maaskant was presented with the Dr. Randy Gregg Award in recognition of student-athlete community service. In his fifth year with the Axemen – and second season captaining the club – Maaskant posted a career high of 15 points counting four goals and 11 assists through 28 appearances. Away from the rink, Maaskant is a three-time academic all-Canadian in working toward a bachelor of business administration degree. The native of Clinton, Ont., is also actively involved in several voluntary and fundraising-related activities including serving as co-president of the Acadia Players’ Association. Maaskant, 26, spent four seasons in the OHL from 2011-15 as part of the Erie Otters, Barrie Colts, and Kitchener Rangers.

Canadian Hockey League alumni were also recognized as part of the All-Canadian and All-Rookie Teams:

The 2019-20 U SPORTS national award winners are announced ahead of the University Cup, which begins Thursday in Halifax. This year, 165 CHL alumni will be represented as part of the eight teams competing.