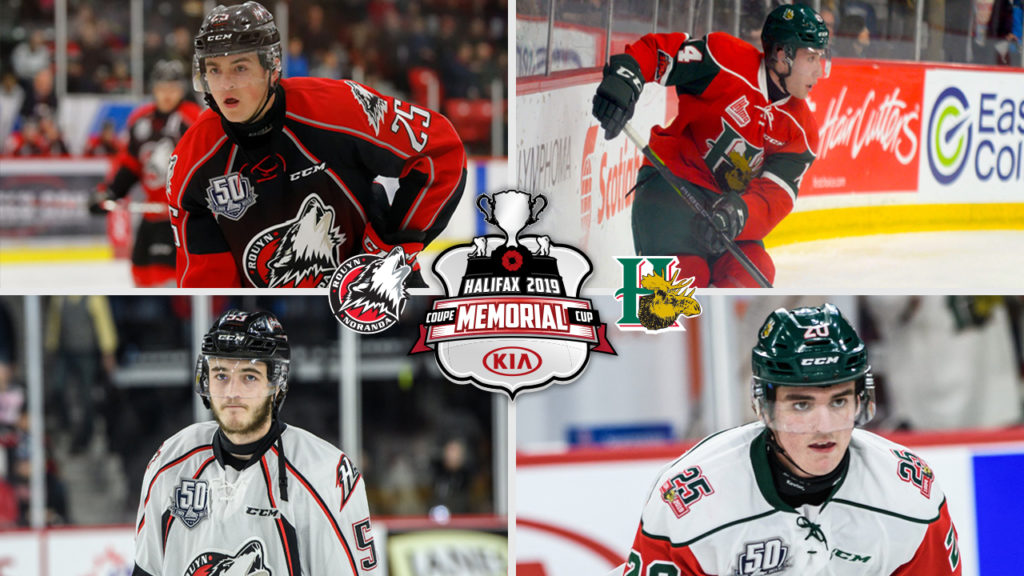 Chasing the dream becomes all the more meaningful when it resides in your own backyard.

For numerous players participating at the 2019 Memorial Cup Presented by Kia, that is just the opportunity that has been bestowed upon them. Between the two clubs representing the QMJHL – the host Halifax Mooseheads and the President Cup Champion Rouyn-Noranda Huskies – no less than 13 players from the Maritime Provinces currently hold down a spot on each respective roster.

It’s a home ice advantage that does not come along every day, or even every decade. And it’s being savoured by all those who have been afforded the luxury.

Eleven months ago, Jared McIsaac was deep in the heart of Texas, shaking hands with the brain trust of the Detroit Red Wings, the team that had just selected him in the second round of the 2018 NHL Entry Draft in Dallas. Since that weekend in the Lone Star State, McIsaac’s travels have taken him to his first training camp with the Red Wings as well as Vancouver and the 2019 IIHF World Junior Hockey Championships.

This week, McIsaac, born and raised less than an hour up the road from Halifax in Truro, finishes off this life-changing time period right where it began; at home.

“It’s been an eventful last twelve months,” McIssac confirmed. “There’s no other place I’d want to spent the last part of it. This is exactly where I want to be. It’s an exciting time here in Halifax and to be from the Maritimes and a bit of a home boy myself makes it even more special.”

McIsaac was one of many youngsters from the region filling QMJHL rinks to cheer on their heroes. However, for this player, there was a familial tinge to the journeys from Truro to Halifax.

“Growing up, I was down for quite a few (games) with my parents and other members of my families. My uncle (current NHL official Jon McIssac) was a ref in the “Q” at that time so we’d come down and watch him. And of course, there was that Mooseheads team and their historic run in 2013. There’s lots (of memories) for me.”

The dream of playing for the Mooseheads became a reality for the third-year veteran when he was chosen second overall by Halifax at the 2016 QMJHL Draft. McIssac, drafted to major junior out of the Cole Harbour Wolf Pack midget AAA program, has nothing but praise for the grassroots of the game.

“I think Hockey Nova Scotia has done a great job of developing our players with the High Performance programs. Their Under-14 and Under-15 programs give you a good look at what (calibre of play and players) in the other provinces is like. It kind of opens your eyes up to what the national stage is like. I was fortunate enough to get that opportunity. They’ve done a really good job and I think it’s just going to get better and better.”

Meaningful praise, indeed. For when it comes to getting better and better, McIsaac knows whereof he speaks.

Rouyn-Noranda Huskies forward Tyler Hinam grew up in Halifax. Like countless others, he cheered on the Mooseheads from the stands in his youth. Where his tale follows a rarer path is the fact that his father, Mark, was an employee of the Mooseheads for several years during the late 1990’s and early 2000’s.

“I celebrated my first birthday in the stands during the 2000 Memorial Cup (in Halifax),” Hinam recalled after helping lead the Huskies to victory over the Mooseheads in game six of the President Cup Final. “I’ll be playing in it here for my 20th birthday. It’s amazing.”

Previous allegiances have been set aside in the Hinam household however. The gathering of this clan will be proudly donning the canine logo of Rouyn-Noranda’s squad throughout the week. For the Cole Harbour native, it’s a rare opportunity that he treasures.

“My parents don’t the chance to see me play much with me being in Rouyn-Noranda,” he commented. “For the tournament to be here and to be playing in front of friends and family is really special. I’ve got between 20-25 people here between friends, family plus my billets who made the trip down from Rouyn-Noranda.”

Playing for the Halifax Macs in midget AAA was a major stepping stone to Hinam’s Memorial Cup journey. From the beginning to now, the list of people who were part of this third-year veteran’s path is numerous.

“We had some great volunteer coaches that volunteer their time and help you get to where you are,” he said. “You have to be thankful to them and for everything they’ve done for you.”

Everyone – from his friends, family and coaches including Hinam himself – are relishing in the opportunity to reap the rewards of the time invested during this week’s event.

In the first round of the 2017 QMJHL Draft, the Halifax Mooseheads used the latter of their two first round selections on defenceman Justin Barron. He immediately became the latest in a long like of kids from the city who now donned the jersey of the team they cheered on from the stands in the years leading up to draft day.

A product of the Halifax Macs Midget AAA program, Barron’s time growing up around the Mooseheads was memorable. This week, memories are being formed anew for the second-year blueliner as several familiar faces are now cheering him and his teammates on from the stands he sat in previous years.

“I grew up a fan of the Mooseheads so just getting the chance to play for them is really special,” Barron explains. “In 2013, when they won the President Cup here at home, it was pretty cool to see how engaged and how supportive the fans were. Hosting the Memorial Cup in my hometown with so many friends and family in the stands is really an awesome experience.”

For Barron, it’s the culmination of what has been a special season. It’s also been one steeped in benefits he has embraced.

“For me, it’s a bit of advantage to be able to live at home, sleep in your own bed,” he remarked. “I’m really fortunate to have that opportunity. It’s not something a lot of guys get to do. I’m really privileged to live at home and play in my hometown.”

Like the team itself, Barron has developed in impressive fashion over the past two seasons. Taking on a more prominent role as the Mooseheads were met with numerous lineup changes on the back end due to injury, trades and international tournaments over the course of the season was a situation he not only accepted but thrived under.

Barron points to his development as a minor hockey player in the Halifax area as a key piece of the foundation on which he built his game.

“(Minor hockey) was a huge part of my development,” he said. “I know the Maritimes can sometimes get overlooked a bit but it’s been getting better every year and getting more looks. Great players come out of here every year.”

In that regard, Barron is one of many getting that look. And for good reason.

Growing up in Summerside, PEI, Noah Dobson took the first steps towards stardom in the junior ranks. Those steps on that pathway has taken several twists and turns, particularly in the last three years.

After being drafted last June by the New York Islanders in the first round to donning the colors of Team Canada in Vancouver to making his way to the top ranked squad in the CHL in January, to have what could be the culmination of his QMJHL come to a realization in the Maritimes is something he cherishes.

“The last 12 months have been pretty crazy,” Dobson remarked. “A lot of dreams have come true. It’s a privilege to play in this tournament. To be able to do it this close to home is exciting. I’ve got plenty of friends and family and old coaches here. I’m really trying to enjoy it and I know they’re enjoying it, too.”

About those coaches. They are part of a hockey lifeline that has served this third-year veteran well throughout his developing years.

“I’ve had lots of great coaches over the years in minor hockey,” Dobson recalls. “Rodney MacArthur was one of the guys that coached me for a few years. I’m good friends with his son and we stayed in touch. He was at our opening game (against the Guelph Storm). He’s a great hockey mind that taught me how to think the game.”

Dobson is just one of several players developed in the region that are on the leading edge of the game’s next wave of professional talent. And, like all that share in that situation, he always remembers where he came from.

“It’s huge,” Dobson answered when asked how he felt about being one of the young Maritime leaders in the game. “Being a kid from PEI, you take pride in being from there. There’s lots of talent on that island. More and more kids are starting to produce through the ranks and into the major junior level. It’s great to be a role model for those younger kids and to show them that just because you’re from a small island, you can play with anyone. The size of the place you’re from doesn’t matter. It’s about how hard you work and how much you dedicate yourself to the game. Your dreams can come true no matter where you’re from.”

The size of your hometown can pale in comparison to the size of your game. At this early age, Noah Dobson hasn’t just learned this golden rule, he’s embraced it. No doubt, the entire island, coach MacArthur included, is proud.