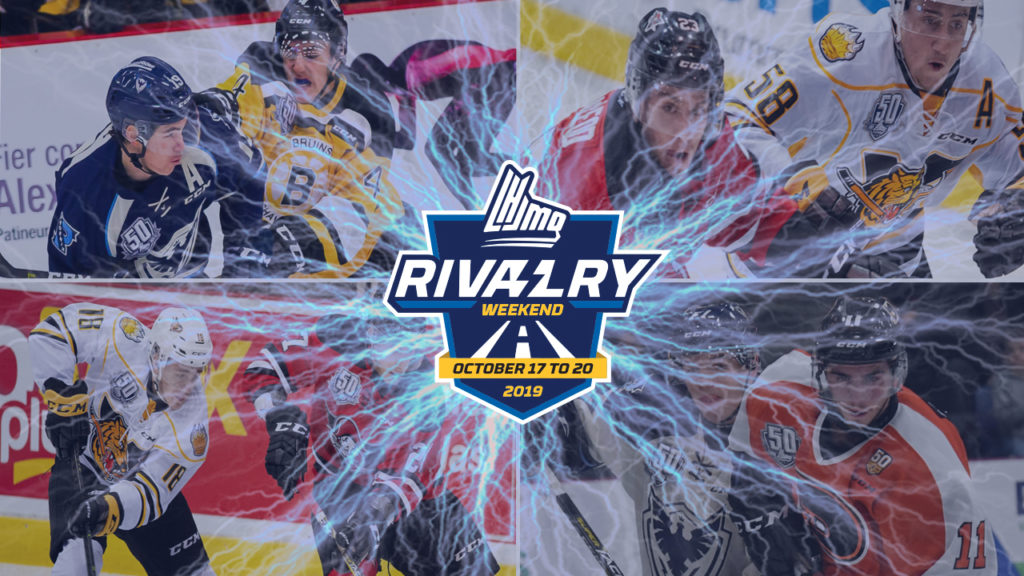 The QMJHL’s Central Division is a special group. With the closest set of teams geographically and three franchises with histories that extend back for decades, the war waged between these four clubs is something that has become something akin to a rite of passage. This week will bear witness to additional fuel for those fires as Rivalry Weekend descends upon the “Q”.

Drummond or Victo? Which “ville” will rise?

One could easily write a book on the rivalry between the Victoriaville Tigres and Drummondville Voltigeurs. Or a volume of books. That’s what 31 years, six playoff series and more drama than a month of Twitter posts will get you. On Friday night in Victoriaville and Saturday afternoon in Drummondville, it all gets started up again.

It’s been a slow start for the Tigres in 2019-20, the club having won just two of their first 11 games entering play this week. Despite that, many key pieces to a team that earned a berth in the President Cup Quarter-Finals last year remain in place. This includes the Russian duo of Mikhail Abramov and Egor Serdyuk, the latter of whom has notched six goals in seven games this season. The defensive group possesses its share of talent, including second-year rearguard Sean Larochelle and last year’s QMJHL Second Team All-Star goaltender Tristan Cote-Cazenave. However, the team is currently allowing an average of four goals per game, which has eroded the club’s chances of success.

Meanwhile in Drummondville, the Voltigeurs have begun the year by largely exceeding the expectations of many. Sitting a solid fourth in the Western Conference, the club is finding ways to win despite missing several large pieces to a squad that notched 52 regular season victories in 2018-19. Three returning players from that roster – centers Xavier Simoneau and Remy Anglehart along with winger Dawson Mercer – are leading the charge offensively while a defensive corps that possesses just two veterans in Thomas Pelletier and Mathieu Charlebois continues to find its way. Though it hasn’t always been pretty, the Volts approach has been effective as they currently sport a five-game winning streak.

There may not be another team in the league that would like to stop the Voltigeurs in their tracks more than the Tigres. And for the club from the Bois-Francs region, that sort of opportunity couldn’t come at a better time.

Shawinigan and Sherbrooke, who keeps rolling?

Unlike their contemporaries in Drummondville, the Sherbrooke Phoenix entered the season with heightened expectations. They have more than lived up to that billing. The top club in the “Q” entering Rivalry Weekend, the Phoenix has lost only once in regulation so far this year and has stayed above all challengers. With five point-per-game players, including 2019 Pittsburgh Penguins first-rounder Samuel Poulin and veteran winger Alex-Olivier Voyer, as well as the hot start of Slovakian netminder Samuel Hlavaj, the Phoenix is displaying uncanny proficiency on both sides of the puck.

What has been a surprise is one of the teams that is hot on their heels.

That would be the Shawinigan Cataractes. Winners of 14 out of 68 games during the 2018-19 regular season, the Cataractes have already compiled seven triumphs through their first ten games this year. Led by a superhuman start to the season by goaltender Antoine Coulombe, the group has found itself in six one or two-goal games early on this campaign, winning each of them. The offense has been driven by former third overall QMJHL Draft selection Mavrik Bourque. Complimented by a supporting cast that includes Arizona Coyotes draftee Valentin Nussbaumer, Xavier Cormier and Russian rookie Vasily Ponomarev, the Cataractes have been one of the feel-good stories of the initial weeks of this season.

Although these two organizations haven’t forged much of a history – they’ve met just once in the postseason since the Phoenix entered the league in 2012 – the rivalry between the Cataractes and previous incarnations of strong Sherbrooke squads has been memorable. With these two teams trending upwards in 2019-20, this weekend could spark animosity that has been buried for far too long.