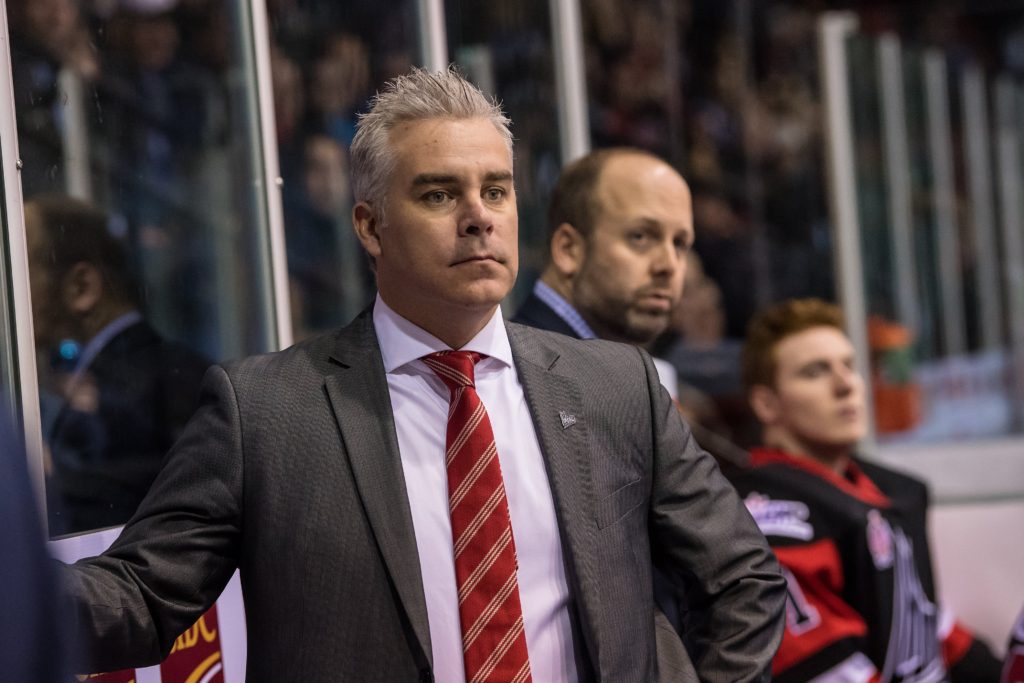 Dominique Ducharme is in his first season as the head coach of the Drummondville Voltigeurs, after a five-year run in Halifax that saw him lead the Mooseheads to a Memorial Cup title in 2013 and claim the Brian Kilrea Coach of the Year award. This season he will be the head coach of Team Canada at the World Junior Hockey Championship that takes place in Toronto and Montreal.

The Joliette, Que., native recently took the time to talk to Prospects Hockey contributor Willy Palov about the CIBC Canada Russia Series, Team Canada and his outlook heading into the World Junior.

Willy Palov: How are things going so far in Drummondville? It must be nice to be closer to home.

Dominique Ducharme: I had five great years in Halifax (three as head coach, two as an assistant) and it was a very difficult decision to leave. But it was hard for me not to see my family as much as I wanted to. It’s only about an hour and 20 minutes to drive from here to where my kids live so I can see them a lot more. That’s been really nice. I’ve also been really happy with how things have gone with the team so far.

WP: This is a big stretch coming up for you because you’ll be the head coach for Team Canada at the World Juniors in December and January, but first you have the CIBC Canada Russia Series coming up before that. You’ve already been through it before and observed how it all works. What did you see then that will help you now as the head coach of the world junior team?

DD: First of all, Russia always bring in a good team. Personally, I’m going to see the games out west and in Ontario before they play our league so I’ll know them a little better. Usually they’re a pretty physical, big team with skills and they make you work to earn anything you want. They play a good defensive game and they’re pretty structured.

WP: Is it hard to coach in that kind of event because most of your players haven’t played together before?

DD: It is, but at the same time we’re trying to use chemistry that we know already exists between some guys. You might have guys from the same junior teams or maybe played together before. Also, this is all preparation for the World Juniors and what we do with the team from every league is make sure we use the same style of play. Part of it is the structure that we put in place in the (Team Canada) summer camp. We want to bring that back to the guys who were at camp, but also explain it to the new players who might be coming to the (final selection) camp. It’s a simple system because you don’t have much time but it’s within what we want with Hockey Canada.

WP: The CIBC Canada Russia Series is about measuring who might be able to help you at the World Juniors and part of that is judging who can deal with pressure. For each player who gets invited to play, they only get two games to prove they can perform in that kind of environment. How much are you and the staff watching to see how they handle the kind of pressure that comes with a short event because that’s what they’ll face at the World Junior?

DD: Obviously we look at them all year long but to see them in an environment like this where they need to adapt quickly, that’s something really important for us. Also, the level of play is higher than what they play within their leagues so it’s a good way to see if guys can be special in those circumstances. That might mean being dominant in one area or by being special in the way that they can adapt to playing a role they don’t usually play with their regular team. All of that put together, it’s a great tool to evaluate the players and to see how they can adjust and raise their game to the level we need at Christmas. It’s a great stepping stone because you’re starting to think about roles on your team and you need to get it right. The difference between winning and losing at the World Junior is so small that you have to do everything possible to make the right decisions with the players.

WP: How much can you tell us about the level of input the head coach gets into final roster decisions for the World Junior team? For example, do you get equal say with the scouts and everyone else on the staff or do you get more say because it’s your team?

DD: It’s a team effort. Ryan Jankowski goes around the country and North America for Hockey Canada to see all of these guys play and he obviously brings back a lot of information. For the rest of us, some guys will see less because we’re busy coaching. Like for me, my team plays in the Quebec league so I don’t see the Western league or Ontario league players as much. We get the chance to see everybody at Hockey Canada camps but when you can see everybody in games like this series, it’s really important.

WP: Now that it’s your turn as the head coach, how much are you looking forward to moving the process into the phase where you actually pick a team and get a sense for what kind of identity you’ll have?

DD: For sure. That’s when it gets exciting. The other thing is with the number of guys who are in the NHL right now that are available to play junior, we need to see as many other players as we can. We need to really dig and find out and know the guys more. You have to be prepared for every situation with your roster because sometimes things can change late in the process. That’s why it’s so important to know as much as possible about every player and how they might fit with the team.

WP: You and the staff must already have a rough idea of certain players who are being seriously considered for the World Junior team but how much can change in these games, for better or worse?

DD: I think it can open doors but it can also shut doors for guys. We know these players already but you’re always looking for more ways to evaluate them. And at the same time, I don’t think you can make the team just because you play well but you may (clinch) your chance to be invited to the Christmas camp where you can try to make the team. We know we can’t only look at two games and make decisions just on what we see. But because the level of play is that much higher and because the context of it is a lot more like World Junior, with how you need to adapt and raise your game, it is a spot where you can show you have the character and abilities and the will to do it, or you don’t. And that’s why even now we might think we have certain ideas about players but it’s still too early to talk about them specifically because so much can change.

WP: Leagues are always looking for ways to make exhibition games mean something and I can’t think of anything that compares to this CIBC Canada Russia Series. You have the best talent from the three leagues playing games on national TV that could determine whether a kid gets invited to try out for his national team. What is that experience like for the players and coaches?

DD: Not only is it a tool for Hockey Canada but I think it’s great for all three leagues to be able to showcase their best players against a rival like Russia. It’s a challenge you take seriously when you’re part of it and the games are always exciting for the fans to watch. You don’t always get that with these kinds of things. I think it’s great for junior hockey in general.

Willy Palov covers the QMJHL and is based in Halifax