Cadorette, Erne and Brodeur named the TELUS three stars of the week 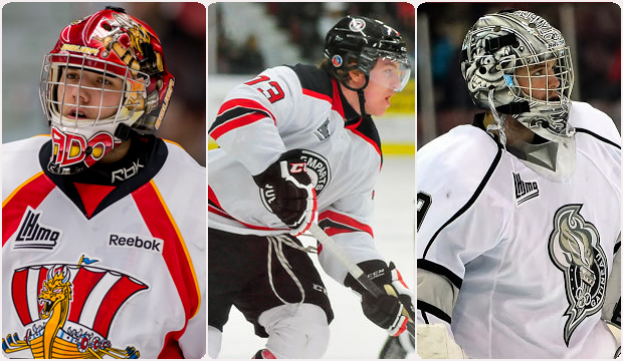 BOUCHERVILLE, Monday January 13, 2014 – Philippe Cadorette, Adam Erne and Anthony Brodeur were named today the TELUS three stars of the week for January 6 to 12, 2014.

The first star of the week is the Baie-Comeau Drakkar goaltender Philippe Cadorette. In 2 games, he got 2 wins, including one by shutout, maintained an average of 0.50 and a save percentage of .989. Friday, against the Val-d’Or Foreurs’ offensive power, Cadorette was beaten once in a 5-1 win. Sunday, he recorded his fourth shutout of the season in a 1-0 win against the Rouyn-Noranda Huskies. The shutout allowed him to equal the team record for one season, co-owned by Ghislain Rousseau (2001-02) and Marco Cousineau (2007-08). His weekend performance allows him to take over the top spot in the league for goals against average (2.33).

Quebec Remparts forward, Adam Erne, is the second star of the week. In 4 games, he scored 5 goals and added 5 assists for a total of 10 points. Wednesday, with 1 goal and 3 assists, Erne helped his team win the game 6-2 against the Victoriaville Tigres. Saturday against the Saint John Sea Dogs, he scored twice in a 3-1 win. He now has 50 points in 36 games, which ranks him 15th in league scoring.

The third star is Anthony Brodeur, goaltender for the Gatineau Olympiques. In 2 games, he maintained an average of 0.50 and a save percentage of .982. Wednesday, he got his first career shutout in the QMJHL with 21 saves against the Chicoutimi Saguenéens. Friday, despite his 33 saves, the Tigers defeated the Olympiques 1-0. During that game, Martin Brodeur’s son blocked all the shots for the first 48 minutes, bringing his total time without allowing a goal to 194 minutes and 28 seconds, breaking the franchise (Hull-Gatineau) record which was held by Frédéric Malette (1997-98).