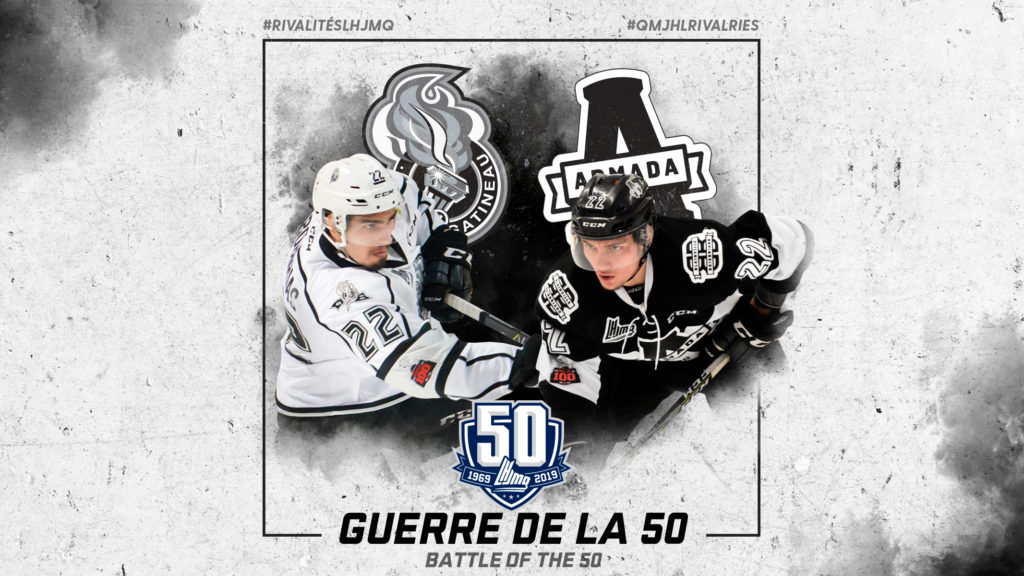 This weekend, the Gatineau Olympiques host the Blainville-Boisbriand Armada on Friday night at 7:30pm ET as part of the latest edition of Rivalry Weekend in the QMJHL. The two clubs will complete the home-and-home series on Sunday at 3pm ET, in Blainville.

The Olympiques have been a part of the QMJHL since 1973. Over that time, they have piled on team and individual accolades en masse. The team [formerly known as the Hull Festivals and later, Hull Olympiques], has appeared in 10 President Cup Finals, captured seven playoff titles and earned its crowning achievement in 1997, winning the Memorial Cup on home ice.

Since making the move to the Blainville-Boisbriand area in 2011, the Armada has been a model of consistency, enjoying six 40-win seasons, back-to-back President Cup Final appearances in 2017 and 2018, and a Jean-Rougeau Trophy as the league’s best regular season club last year.

In its first four seasons in Blainville, the Armada team faced the Olympiques twice in the postseason. In 2012, Gatineau became the first-ever playoff victim of the Armada, falling in a four-game first round sweep. The Olympiques would turn the tables on the Armada during a first round victory in 2015, capturing that series in six games.

Two key players have suited up for both franchises historically. Defenceman Elie Berube who was, ironically, a member of the winning side in both series noted above, spent parts of two seasons with the Armada before a deal to Gatineau led to a two-and-a-half-year stint with the Olympiques that started in 2013.

The most successful player to appear for both clubs was Alexandre Alain, who spent parts of three seasons in Gatineau before breaking out in Blainville-Boisbriand, racking up 112 points in two regular seasons while being at the core of the team’s back-to-back Final appearances.

Offensively, the Olympiques are led by a pair of veteran wingers in Shawn Boudrais and Maxim Trépanier as well as defenceman Gabriel Bilodeau, who is currently second among all QMJHL rearguards in scoring. Between the pipes, Tristan Berubé has proven reliable once again in his third season in the league. The Armada is experiencing a turnover, however, a pair of remaining veterans in Joël Teasdale and Charles-Antoine Giguère are leading the way on offense along with blueliner Samuel Desgroseilliers, who ranks second in points for first-year defencemen.

In nets, Émile Samson is proving his playoff run as a rookie last year was no fluke as he currently finds himself among the league leaders in both goals against average and save percentage. He was also named the first star of the lone matchup between these two clubs so far this season, a 3-1 Armada victory in Gatineau on October 13th.

With the two clubs locked into an early battle for positioning in the West Division this season, look for an exciting weekend battle as both clubs make their way up and down the 50 trying to end up on top.