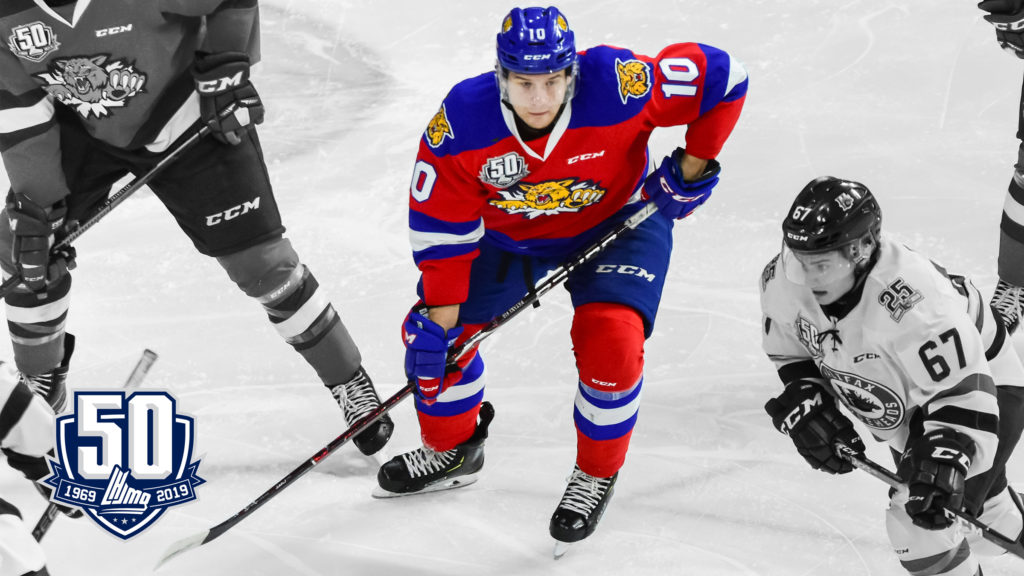 Brady Pataki is looking to have an impact on the ice and in the classroom in his final year of junior hockey with the Moncton Wildcats.

While Pataki still dreams of playing professional hockey one day, he understands the importance of having a backup plan.

“I would still love to play in the National Hockey League, but you have to be realistic about it,” he confessed. “School should be first and foremost for all the guys. Hockey is a hard game [to make a living off of], so you have to be focused on school to make sure you have a backup plan,” added the 20-year-old winger.

The Wallaceburg, Ontario native is considering all of his options right now, but he is strongly leaning towards playing Canadian University hockey next season.

“When a player decides to come play in the Quebec Major Junior Hockey League, our number one goal is to do everything we can to develop him and give him the best chance to play pro hockey, and reach the NHL,” said longtime QMJHL Commissioner, Gilles Courteau.

And with only two percent of all players in the Canadian Hockey League making it to the NHL, the need for a strong academic presence is critical.

“Our goal is to take care of the other ninety-eight percent of players that play in our league for three to four years and that don’t turn pro,” stressed Courteau.

Each team is responsible for their players’ education during their tenure in the league. However, once the players have finished their time in the ‘Q’, or have tried their hand in the professional ranks for two years or less, the league provides them with an educational package maxing out at six thousand dollars a year for four years.

Courteau is very proud of the education packages currently being offered by the league. Over the last two years alone, the QMJHL has awarded 1.35 million dollars per year to its former players.

There is no doubt that committing to being a full-time athlete and student is definitely challenging.

“Lise is really great.  She has helped me tremendously with my time management and my grades,” said the forward who is already working towards earning a business degree.

“Brady takes education very seriously and contributes to the life and activities of the team. He’s exemplary in his desire to succeed,” said Doucet. “What impresses me the most is the way he successfully balances his academic and athletic careers, without compromising either one.”

“Lise is a huge part of our program,” explained Wildcats Director of Business Operations, Ryan Jenner. “She creates individualized educational programs for each player to ensure that they are completing the required credits from their respective educational system, as well as setting them up for success for post-secondary education.”

Like many other major junior players across the CHL, Pataki takes full advantage of the long bus rides and late nights on the road to ensure that his school work is completed on time.

“Usually a lot of guys are getting some sleep. But when you need something done, you have to cram it in on the bus,” confessed the Wildcats veteran.

“The league is very focused on making sure that the players are supported throughout their careers while in the QMJHL, and after. They are always looking at ways to innovate and make life as a student-athlete better,” said Jenner, who also played four years in the QMJHL before going on to play hockey at Dalhousie University.

“This is a school of life and we prepare these young men to be great people and leaders in their community long after they finish playing hockey,” said Jenner with pride.