Armada strikes early and never looks back in Game 1 win 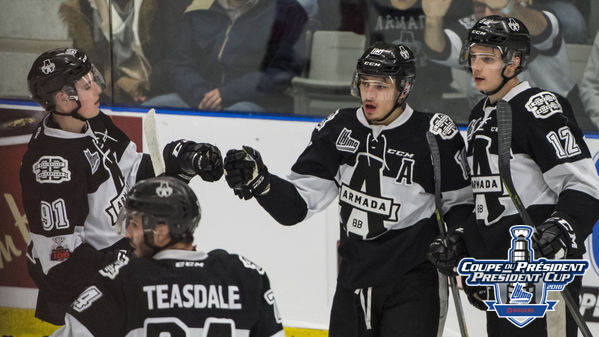 The Blainville-Boisbriand Armada opened the 2018 Rogers President Cup Finals against the Acadie-Bathurst Titan on Friday night and skated away with a 4-1 win in front of its home fans.

Alex Barré-Boulet led the way offensively for the Armada with one goal and one assist, while his teammates Thomas Éthier, Luke Henman and Charles-Antoine Giguère rounded out the scoring in the win. Justin Ducharme was the lone goal scorer for the Titan squad.

Émile Samson’s tremendous playoff run continued between the pipes for the Armada as the netminder pushed aside 29 of the 30 shots he faced, en route to his 12th postseason victory. Down the other end, Evan Fitzpatrick held the fort as best he could by making 31 saves and surrendering four goals for just the second time in the playoffs.

The Armada struck first and early in the game; Giguère made it 1-0 by tapping home Barré-Boulet’s rebound 74 seconds following the opening face-off and the home squad doubled its lead just over three minutes later when Henman capitalized on a rebound of his own.

The dust would settle after that as both teams failed to find the back of the net in the second period and the Armada took its 2-0 lead into the final frame.

Once again, Blainville-Boisbriand opened the period with an early goal scored just 2:15 in. This time it was off the stick of Éthier who, thanks to a perfectly placed shot beneath the crossbar, managed to score his sixth of the playoffs.

While playing shorthanded, Ducharme cut the Armada lead to 3-1 just over four minutes later after being credited with the Titan’s first goal of the Finals. The Acadie-Bathurst celebrations were short-lived however, as Barré-Boulet closed off the same Armada power play by netting his 12th of the playoffs.

Blainville-Boisbriand’s fourth goal would be the only one scored on its four attempts with a man advantage, while the Titan failed to score on its only power play opportunity. The Armada also ended the game with a 35-30 edge in shots on goal.

Both team’s will be right back in the action with Game 2 set to take place tomorrow night at 7 p.m. ET, once again in Boisbriand’s Centre d’Excellence Sports Rousseau.